For those of us who can’t stay motivated to work out on our own, Moov is launching Moov Now, the next generation of its wearable fitness tracker and artificially intelligent personal trainer.

Moov is a wearable band that pairs with an app to train users on five sports — running, cycling, swimming, cardio boxing, and a seven-minute bodyweight workout that you can do in your living room.

The company launched a Selfstarter campaign in February of 2014 and pulled in more than $1 million in pre-sale orders in two weeks. The first Moov devices shipped last Fall, and the company has since sold tens of thousands of products through Amazon and their website.

Like a Fitbit, Moov tracks daily activity and sleep — but rather than steps, Moov measures movement within a 3D space. The hardware is composed of an accelerometer, a gyroscope to detect rotation, and a magnetometer that detects direction of movement.

“Steps doesn’t really mean working out if I want to get fit,” says Moov co-founder Meng Li. “The minutes of moderate exercise matter more to me than the number of steps.”

Paired with an algorithm that makes sense of all the data the band collects, Moov measures speed, stride cadence, and landing impact while you run, cycle, or swim, among other activities. 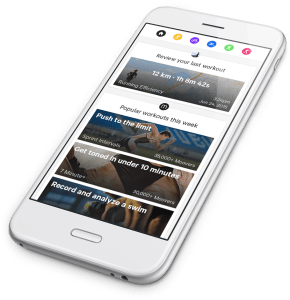 A coach, in the voice of Siri, instructs you while you work out and makes suggestions on how to improve your form. If you prefer listening to music while you exercise, Moov integrates with Spotify so your music fades in and out when the coach is speaking to you.

After you work out with the band a couple of times, your coach automatically places you on a level. Running, for instance, has 69 different levels and five programs tailored to different goals, like burning calories, correcting form, or increasing speed.

If your coach knows you’re a level 7 and you put yourself on a level 2, she will call you out and tell you to pick up the pace. She was so intense in the first generation of Moov that the company decided to tone her down a bit in the Moov Now.

“When we first launched the running coach she was very demanding and some of our users asked if she could be nicer occasionally,” says Li. “So we evolved this coach personality-wise, and gave her different modes so that people can reduce coaching when they’re not in a good mood.”

Moov Now has a much more advanced coaching algorithm, a six-month battery life, and a less bulky design with four colors to choose from.

The company will be launching an upgraded version of its app in conjunction with the Moov Now release, which includes new sports like spinning, which users have requested. They’ll be rolling out social features as well, such as a stats leaderboard and a live competition option that lets you challenge other users in real time.

“Five years from now the default way of working out will be to have a personal coach with you,” Li says. “Now when I drive I need a personal turn-by-turn assistant, and soon it will be the same with working out.”

The Moov Now is available for pre-order today, at $59 for one band or $99 for two, and the bands are slated to ship in the Fall.