Google has been a significant player in many facets of the patent world — as a creator, critic, litigator, buyer and big data indexer. Today, it’s taking the wraps off a product that is its flagship in the last of those categories: It’s launching a new version of the Google Patents search, which will now also incorporate related results of Prior Art and Google Scholar citations.

Google says the old google.com/patents link and its standalone Prior Art Finder will continue to work for now.

In an area of technology often flooded with arcane writing, irrelevant information, smoke and mirrors, and a lot of patents (600,000 applications filed in 2014 alone, according to Google’s deputy general council Allen Lo and patent engineer Ian Wetherbee), Google’s main theme here is simplicity, both in terms of functionality and user interface.

The idea is that the new patent search will be easier to use both by experts in the field as well as the general public to look for patents and related materials. Given the rising interest in safeguarding IP among developers and founders who may have never had to consider patents much before, this could prove to be especially useful. 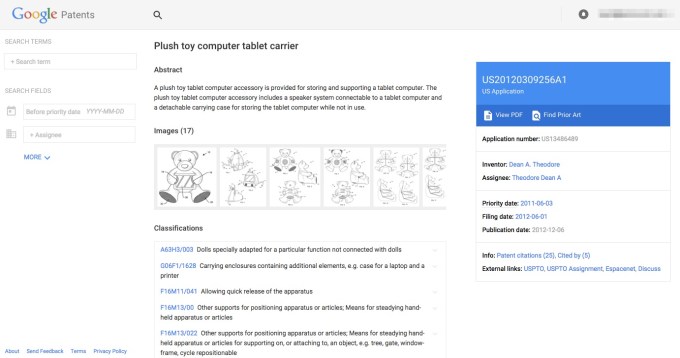 This is not the first time that Google has tweaked its patent search. Back in 2012, the company actually shut down the standalone search page for patents, and rolled it into its main search instead, where you could try your hand at finding patents either through the basic Google web search or www.google.com/patents. Ironically, today’s highlighting of a new experience at patents.google.com is a bit of a return to the old route.

But that does not mean that Google had put patents on the backburner. Quite to the contrary: in the last couple of years the company has expanded the search to cover patents from other countries. And it also comes a couple of months after Google launched a temporary marketplace for people to sell patents — with Google being the sole buyer. (We’ve asked for an update on how that experiment went and whether there will be more on that front in future.)

It has also been very outspoken in how to develop patent law and filing going forward to separate the bad actors (that is, trolls) from the good.

The first of these is a single search interface, where Google will integrate both searches for patents as well as prior art — the latter being one of the main ways that people will search for whether an idea has been patented or represented before. While many patent searches (including on the USPTO’s own site) require people to know how to “read” patents to create the right search string to find what they are looking for. Google has instead divided up the process into different fields that are more like those that a user might come across in advanced searches on other sites.

Along with prior art, Google is incorporating another visual tool into the patent search by way of Google Scholar, its vertical search focused on academic research and other scholarly literature.

There is already a way of searching on Google Scholar for patent-related articles (a small box you tick at the bottom of the main search window). Now, Google says it has indexed the whole of its Google Scholar database using CPC Classifications. CPC stands for Cooperative Patent Classifications and was jointly developed across the U.S. and Europe to better standardise how patents and patent-related information is described.

The third area that is changing today has to do with how Google is rethinking its bigger mission in big-data search. Google says that now it will be presenting results in clusters, logical groups that will make it easier to look at results around themes.

This is very much aimed also at the more casual patent researcher. “The improved Google Patents clusters patent and non-patent search results based on CPC codes so that users can review them in logical groups.  This also allows a user to drill down into relevant technical areas without having to understand the CPC system.  From these clusters, searches can be further refined with additional keywords or other parameters,” the company notes.

Another interesting detail, which is not new today but Google is again highlighting, is that while a lot of prior art and patent documents in its database may be from countries outside the U.S., it’s using Google Translate and machine learning behind the scenes so that if you are searching for something in English, you will get results from other places that are still matching your keywords. It’s not a new feature, but Google says it’s not well known (or likely used much).

With the updates also come some interesting movements: the older patent search interface included a link to discuss patents on Stack Exchange. This has disappeared, but has not been removed altogether. The Stack Exchange discuss link is now in an “External links” section labeled as “Discuss”. Google continues to work with IFI Claims, a patent information portal, for some of the data.

A screenshot of how that interface that you get through www.google.com/patents is below. 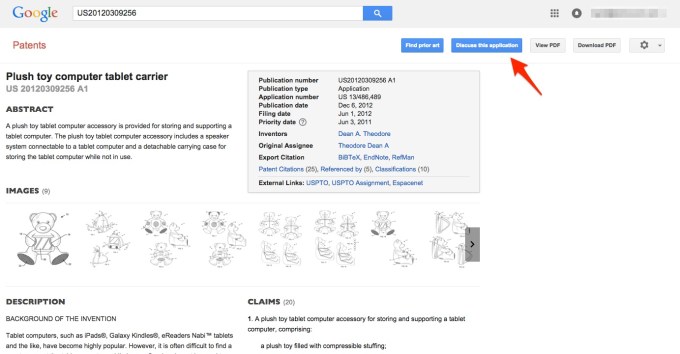 Updated with more details from Google and on IFI Claims