Consumer demand was there for Amazon Prime Day, but the deals did not deliver. At least, that’s the sentiment being shared on social media about Amazon’s first-ever attempt at creating its own sales holiday – one which the company had promised would feature “more deals than Black Friday.”

In celebration of Amazon’s 20th anniversary, Prime Day was meant to somewhat replicate the post-Thanksgiving sales rush in the U.S., or perhaps Chinese e-commerce company Alibaba’s “Singles Day” – but one that took place via Amazon’s own website and apps.

Unfortunately for Amazon, the event has not been met with great feedback so far.

A number of shoppers stayed up late to be first in line for Amazon’s e-commerce sales, but found themselves disappointed by the quality of the deals offered when Prime Day arrived. That led to many joking about how Prime Day looked more like an online “garage sale” or yard sale, instead of the big event Amazon intended.

Typically, during Black Friday and Cyber Monday shopping events, retailers tease “door busters” to draw crowds who then scoop up other items the stores want to unload. But outside of some decent enough smart TV discounts, it seems that Amazon’s best Prime Day deals were those where it had cut the prices on its own products. 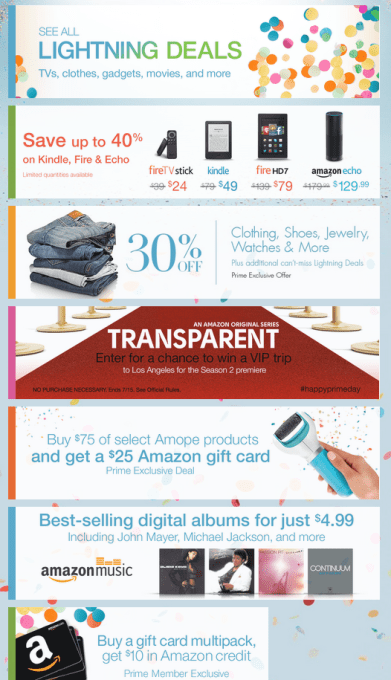 Unfortunately, by early Wednesday morning, many of these deals were already sold out, consumers soon discovered.

Those who popped over to Prime Day during lunch breaks or in the early a.m. on the West Coast were out of luck. Instead of being able to buy these limited-quantity deals, consumers were being offered the option to join a waitlist for the items. Amazon had said it would stagger the deals throughout the day, but as of 3 p.m. EDT, the Amazon hardware deals had just dwindled down to almost nothing. The only thing left at the time of writing – at least in terms of Amazon hardware sales – is a $79 Kindle Fire HD6 (usually $99.)

First reaction to #PrimeDay? If I wanted to be on a waitlist, I’d apply to college again. Walmart site seems easier to navigate than Amazon.

Well done Amazon, the only deals I was really interested in were sold out before I woke up. #PrimeDay — Dave Bohnert (@copiedline) July 15, 2015

Other promotions also tended to feature savings on Amazon’s own products and services, like a $30 gift card when you bought through Amazon Home Services; $10 in credit when you bought a gift card multipack; $15 off Amazon Warehouse deals; and so on.

Meanwhile, as the Amazon hardware deals disappeared in rapid succession, the Amazon Prime Day landing page heavily promoted the company’s typical “Lightning Deals,” which led to shoppers seeing big ads about run-of-the-mill purchase opportunities like “20% off dishwasher detergent,” or $5 off razor blades when you “subscribe & save.”

Some on Twitter made jokes about the various Lightning deals offered, quipping about how they could finally buy some cheap vitamins, cup holders or other random items. News sites even rounded up some of the more bizarre savings they spotted, while others tried at least to share lists of better deals with their readers.

But even on Wirecutter’s handy resource for Prime Day deals, the site found itself pointing to non-Prime Day related sales, like a discounted printer they just happened across while looking for deals, or a Walmart sale on a Fitbit Charge HR, which turned out to be better priced than Amazon’s. (Walmart had planned its own sales event to counter Amazon’s push.)

Twitter filled with complaints from consumers who lamented that Amazon’s deals were “boring,” they couldn’t find anything they wanted to buy, that the savings weren’t stellar, that the only things they wanted were sold out, and so on.

How #PrimeDay looks to me pic.twitter.com/37nbebEiBY

So far #PrimeDay looks like killer savings on USB cables and paper towels.

#PrimeDay is a joke. Boring items, not that great of savings. Disappointed… — Tregg Player (@TreggPlayer) July 15, 2015

Some pundits argued that despite its failure to win over consumer sentiment, Amazon was able to score a ton of data about products in demand in light of the rush to shop on Prime Day. That’s good, in case Amazon ever wants to try this sales event again. It definitely left room for improvement.

What’s interesting, however, is how significant consumer demand really was for the promotion – something that’s hard to see through the Twitter snark.

Amazon claimed early in the day that its “Prime Day” peak order rates passed that of 2014’s Black Friday. Around mid-day, the company said that Prime members had already bought tens of thousands of Fire TV Sticks, 35,000 Lord of the Rings Blu-Ray sets, 28,000 Rubbermaid sets, and 4,000 Echo devices in just 15 minutes. A Kate Spade purse was gone in less than a minute, and it sold 1,200 of the $999 TVs in less than 10 minutes.

But third-party data also paints a picture of what that consumer demand actually looked like today.

According to ChannelAdvisor, for example, Amazon’s daily sales in the U.S. were up around 80 percent as of noon Eastern over last year’s figures, and sales were up 40 percent in Europe.

“We’ve been averaging year-over-year growth in the ~25 percent range, so this is a significant jump that we are already seeing mid-day,” noted Scot Wingo, ChannelAdvisor chairman. However, he added, “We are seeing some negative social media comments as the deals are selling out very quickly, and that can leave buyers frustrated when a lightning deal they are excited about goes out of stock very quickly.”

In addition, Amazon’s mobile applications saw significant movement up the charts on iTunes and Google Play on Wednesday because of Prime Day. For instance, the U.S. iOS app jumped from No. 21 Overall yesterday to No. 5 today.

In other words, consumer demand was ripe for Prime Day. Users were either downloading the app for the first time, re-installing it, or installing it on a new mobile device where they hadn’t yet added it.

According to Danielle Levitas, SVP of Research and Analysis at App Annie, chart movement like that is consistent with what retailers would see around the Black Friday/Cyber Monday shopping cycle.

“In general, within a single store…it could be at least a doubling of downloads to drive [an app] into the top 10,” Levitas explains. “In this particular case, we’re talking about at least a 3x jump for Amazon in terms of what it took to get it into the top 10.” The app passed Instagram and newcomer Musical.ly to reach its high-ranked position, which would have required a significant number of downloads, Levitas also noted.

On Google Play in the U.S., Amazon’s app didn’t quite reach as high a ranking (it’s at No. 14 now), but in absolute terms, the download volume for the app was even higher than it was on iOS.

What these numbers indicate is that consumers were at least interested in checking out Amazon’s deals. But how many ended up actually converting to Amazon Prime members, or how many will now become actively engaged customers in the long-term thanks to Prime Day, still remains to be seen.