OpenSignal has added an Android version of its crowdsourced Wifi Mapper, following the launch of the iOS app back in May. The iOS app has garnered some 155,000 downloads in the two months since it went up on the App Store, according to CEO Brendan Gill, who says the team is expecting a “big reception” on Android — with “thousands” signed up to be pinged about today’s launch.

Quick recap on OpenSignal’s wi-fi mapper app: as with the data-centric startup’s other products, mobile signal and mobile sensor data maps, the app is relying on crowdsourcing to maintain a useful repository of intel about where wi-fi hotspots are located, and whether the hotspots are public, private and free/paid. It also measures the quality of the wi-fi (such as speed, latency and other performance indicators), and meshes its data Foursquare’s location review data to provide added context — such as being able to specify that a hotspot is in a cafe, for instance.

OpenSignal has been able to prime the engine here by starting off with a database of hotspots generated by its network of existing app users — over some four years of usage. The result: a crowdsourced wi-fi database with some 500 million hotspots from the get-go. Which is one way to compete when you’re late to the wi-fi hotspot mapping app party.

Talking to TechCrunch, Gill says the “main thing” the team is excited about at this stage is the circa 10 per cent of users who have created an account and taken the time to manually classified a hotspot as free, paid or private. Users don’t have to register to use the app, so he talks up that early proportion as promising (albeit, early adopters might be more likely to be community-minded types — time will tell). 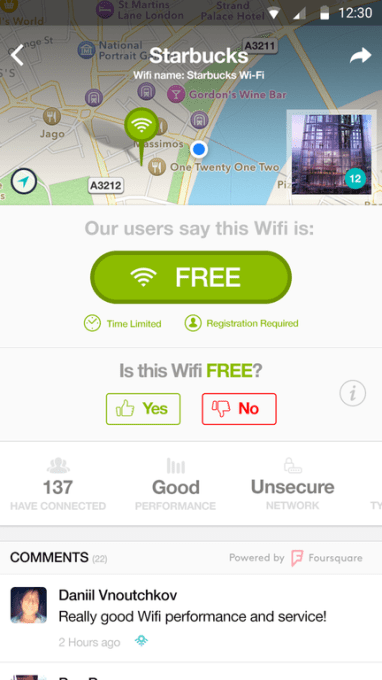 “We’re surprised that this is so high because often in crowdsourcing communities the curation is done by maybe 1-2% of the community and the rest are just data consumers,” notes Gill. The 10 per cent figure just refers to users who have taken the time to classify a wi-fi hotspot’s status (there have been some 16,500 classifications so far); the app’s active user proportion is “a lot higher”, according to Gill — although he’s not specifying how high at this early stage.

OpenSignal uses an automated algorithm to automate the classification process — with some 3 million hotspots classified in this way. But it’s relying on human brains to “tune this”, as he puts it (hence referring to a “curation” process). So the basic recipe is a very large tech-harvested wi-fi hotspot database where errors can be edited by humans.

Gill adds that the “the number 1 piece of feedback” it’s had so far from users is that people don’t like only being allowed to sign in via Facebook. The team is planning to launch an email sign in option in a couple of weeks — and he expects that to help boost curation rates further.

The top markets for downloads for the iOS app so far are: the U.S. (with just under 21 per cent) of downloads, France (around 17%), Japan (~13%), the U.K. (~12%) and Brazil (~9%).
“We expect this to change a lot when we launch on Android — which generally we see a lot more downloads on overall, and countries like Indonesia, Brazil, India etc are the top countries,” adds Gill.