Witness, the live-streaming app that serves as a panic button for the mobile age, debuted earlier this year at the TechCrunch Disrupt NY 2015 Hackathon, where it eventually went on to win the grand prize. Now the app is live in the App Store for the public to try, allowing users to broadcast their location, audio and video to a pre-defined set of emergency contacts. You can think of Witness as something like a private version of Twitter’s Periscope, for example, combined with a user safety application designed to quickly alert friends or family if you’re in trouble or are in an uncomfortable or potentially dangerous situation where you may need help.

Created by developer Marinos Bernitsas, who quit his job in algorithmic trading in New York to focus on his passion for building mobile apps, Witness was originally designed for those who are in high-risk situations – like when you’re walking home alone at night through unknown or unsafe areas.

But the app also resonated with the Hackathon audience and judges because of its potential to document and record police brutality or other cases where civil disobedience was met with undue force – especially as the app had emerged at time when a number of high-profile incidents of clashes with police had brought attention to these issues. 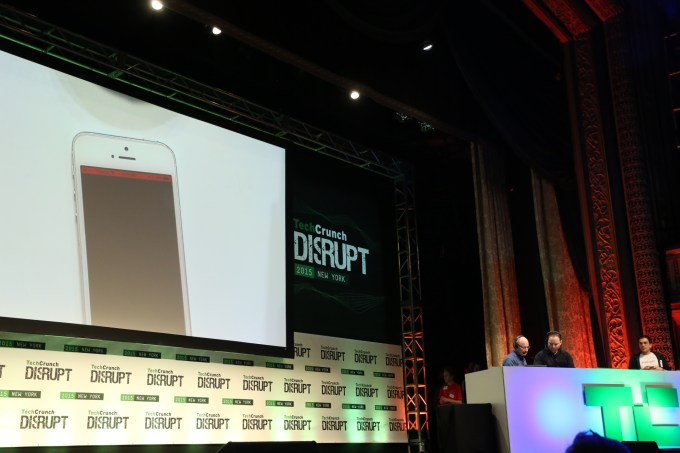 In some of those incidents – like that of the aggressive actions taken by cops against teens at a pool party in Texas, witnesses had recorded the police’s action on their mobile phones. This later helped to build a case against the police officers in question. Now, the Witness app has the potential to do the same, while also alerting loved ones of the incident in real-time.

As a hackathon project, the app was more bare bones. Users would first configure a list of their emergency contacts who would then receive a phone call with an automated recording telling them to look at the incoming text message that included a link to the live-streamed, geolocated video. Also interesting was the fact that the Witness app defaulted to a black screen when recording began, which was designed to hide the fact that you were actively recording.

Now as an App Store application, Bernitsas says Apple required that Witness didn’t black out the screen. However, he is offering a beta build of the app that still offers this feature for those who want it. And he’s planning to experiment with different user interfaces to see if Apple will approve something that sits somewhere in between a fully black screen with a red banner as it had before, and a typical live video preview, like the Camera app offers.

The Witness app has also received a ton of polish over the months following the hackathon, and now includes a cleaner layout for emergency contacts, support for emails for emergency contacts, address book integration, a setup screen, and protection against accidental activation. To use the app, users just launch it and touch anywhere on the screen for a second which kicks off the emails, texts and calls to your contacts.

These recipients can then view the link in any web browser along with a map that tracks the user’s movements – they don’t need to have the app installed themselves. In addition, when a user’s cell signal is slow or there’s no reception, Witness stores everything locally on the device then uploads it when the connection returns. Even if the phone is destroyed, the data is saved to Witness servers. And when an incident is over, the data can be reviewed or replayed. 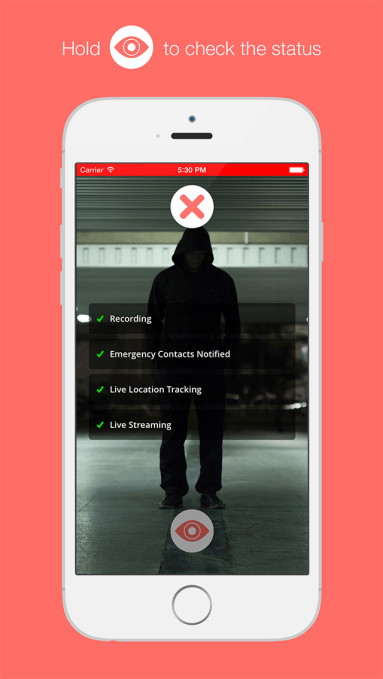 Bernitsas says he’s been testing the app ahead of its debut with a small group of users, including a number of individuals who wanted to test it out for its “panic button”-like functionality. Of those, 83 percent said they would use it in an emergency and 91 percent reported feeling safer with Witness on their phone, they told him.

Right now, Bernitsas is not trying to generate revenue from the app – he just wants to see if and how people will use it.

“Unlike other things I have worked on, this wasn’t the kind of thing that started by thinking of it as a business,” he explains. “Instead, I just thought of it as a cool utility that I could make in 24 hours for me, my friends and my family to use. I never expected what happened at Disrupt and everything that ensued,” Bernitsas continues.

“I heard back from so many people and I was so touched by their stories and how Witness could make an impact in their lives. So I wanted to release it out as soon as possible, even though there is a lot of room for improvement. Witness will only get better over time,” he adds.