You can lead a cat to water, but you can’t make it drink. Even though felines are vulnerable to kidney disease, many are constantly dehydrated because they don’t have a well-developed sense of thirst or are picky about their water source. Developed by a robotics scientist, Pura is a smart fountain designed to not only entice cats, but let owners keep track of their feline overlord’s water intake.

Currently raising funds on Indiegogo, Pura is the creation of Taipei-based startup Noacare. Li-wei Wu, its CEO and CTO, is a robotics scientist who worked at many of Taiwan’s top technology and aerospace companies, including Foxconn. The startup also includes winners of the prestigious Red Dot Design Award, a veterinarian, and an artificial intelligence researcher. The team showed me a working prototype of Pura, which they tested on about 50 cats during its pilot program, at their office last week. 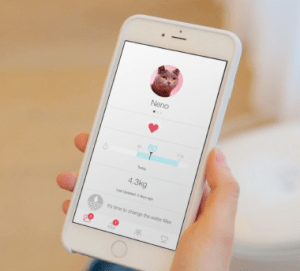 Pura monitors how much water your cat drinks by connecting to a Bluetooth tag on its collar. After you set up a profile for each of your pets, its app will calculate how much water they should consume each day based on their breed, age, weight, and if they eat wet or dry food. Pura’s monitoring system is triggered by each cat’s tag and records when they visit the fountain, as well as how much they drink based on the weight of the water left in the fountain after they walk away.

The app alerts you if your cat drinks too little water—or too much, since a sudden increase in thirst might be a symptom of renal or liver disease.

The fountain features several cat-friendly details, including a steady rush of water that is (hopefully) as alluring as any dripping faucet or flushing toilet. The stream is also designed not to get whiskers wet, since that irritates cats. Its base is heavy and the bottom is lined with slip-proof material, so even the surliest feline can’t knock it over (unless it teams up with other cats).

Pura is a lot more attractive than most other cat water fountains, but more importantly, it’s durable and easy to clean. In order to avoid becoming cesspools of bacteria, fountains need to be thoroughly washed and refilled with fresh water several times a week.

Many cat fountains are fiddly to take apart (my cats currently use a plastic fountain by Japanese company GEX and I have to separate its motorized filter into three pieces before scrubbing each down with a toothbrush). Pura, on the other hand, has three main parts—a fountain plate on top of a mesh filter filled with activated carbon particles, a water container with Pura’s monitoring system and water circulator, and a base—and takes just a few minutes to disassemble and clean. 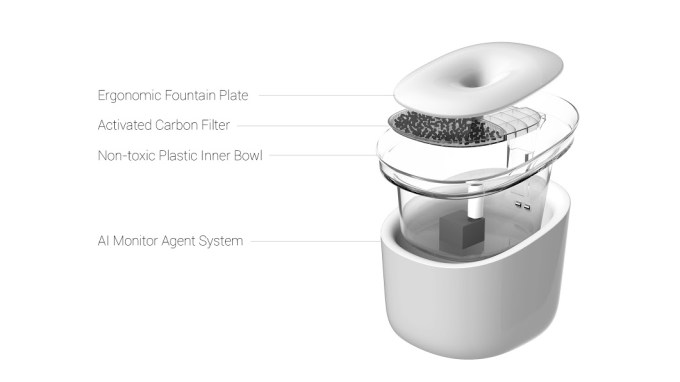 One potential drawback is the fact that Pura’s app only works for cats who can tolerate wearing tags. Many felines—including mine—hate having anything dangling at their necks. The team considered making a tag that sits flush against collars, but nixed that idea because it couldn’t fit all the necessary components. They are still looking other options for tag-phobic cats, however, including integrating technology that senses the tiny RFID microchips many pets have implanted between their shoulder blades for identification purposes.

Pura is currently halfway to its $100,000 goal with 25 days left to go. Noacare’s team says the fountain is ready to manufacture at factories in Taiwan, but they are running the Indiegogo campaign to gauge consumer interest. If they succeed in raising enough funds, Pura is expected to ship by April 2016.