You might think that the path for dating apps is to focus on romance and love. But that may not be the case for one Tinder-like app in Asia.

Paktor, a service focused on Southeast Asia, today closed a SG$10 million ($7.4 million) Series B round that will go towards expanding its userbase and — interestingly — developing beyond romantic matchmaking to connect people with new, platonic friends.

We last checked in on the Singapore-based company when it raised $3 million last November. Its newest capital comes from existing investor Vertex Venture Holdings, and new backers Majuven, and Convergence Ventures. Paktor has seen its registered userbase rise from 1.5 million in November to more than five million today. The company claimed a number of other metrics have grown too: it is now making 12 million matches per month, while the total number of swipes per month has rise from 300 million to 500 million.

Paktor CEO and co-founder Joseph Phua previously told us that convincing the often socially conservative natives in Southeast Asia and Taiwan — the markets where the service sees the most traction — to date via an app is tricky, but now he told TechCrunch that he believes the app and concept behind it has made significant progress.

Indonesia, which has the world’s largest Muslim population, is on track to overtake Taiwan to become Paktor’s largest market, and that embodies the kind of growth it has seen.

“We thought Indonesia would be potentially more conservative, but actually young people are very moderate,” Phua said in an interview. “We found them to be very willing to try new products and tell their friends.”

Now, Paktor is focused on making its mark in other parts of Asia, particularly Japan and Korea. It had previously tested its service in those markets, but Phua said the funding gives it an opportunity to make a more concerted effort this time.

Phua and his team of 50 have focused on growing the service across Southeast Asia, but they have begun seeding the concept of premium services among batches of guinea pig users. So, while Paktor doesn’t have a premium membership, like Tinder Plus, it has tested features such as gifting, search base on premium metrics (job and education, not just location), and contacting ‘top’ users on each country’s leaderboard.

A more rounded premium offering is likely to come before the end of the year. But, unlike Tinder and other rivals, Paktor is also working on some ideas that are perhaps unusual for dating apps.

For one thing, it runs group chat rooms. Those are initially based on location and designed to help discover new people in a different way to straight up hot-or-not photo matching. It was designed to reflect the interest in group dates that is commonplace across Asia. Phua said his first date with his fiance, whom he met on Paktor, was among a group of friends, and I’ve anecdotally heard similar stories from friends across Southeast Asia. 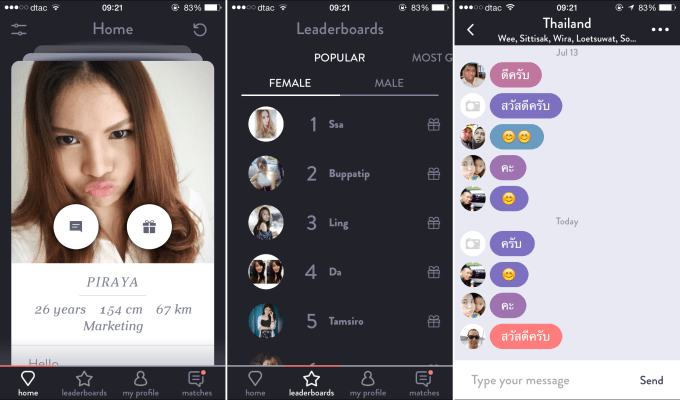 But, for some group chat is a little odd. I was put in a chat with 30 other users — male and female — on joining the app. I found it to be a little confusing — seeing guys’ comments in my feed was a little odd since I was trying to match with ladies — but Phua explained that the feature is also testing a broader thesis: that Paktor can expand beyond romance and connect people via interest and other platonic ways.

Inspired by IRC and other messaging services from the past, which allowed people to connect based on interest groups for friendships and sometimes dating, Phua believes that there’s an opportunity to do much more than romantic matching.

“Beyond pushing our userbase in other parts of Asia, we want to test usage type expansions. We think there’s a white elephant in the room that people don’t touch, namely how can I meet somebody not for a relationship, but social interactions around food, sport or other interests.

“So one of our objectives now is how can we create a product within a product that lets people connect for the sake of meeting socially,” Phua said.

That mantle is largely occupied by Facebook, which has more than a billion monthly users and, as Phua himself admits, is huge across Asia. Nonetheless, the Paktor CEO is keen to explore areas where Paktor can develop beyond just sitting in its current space.

“Staying in dating is extremely profitable, but it limits our ceiling. If we stay in dating, our company can aspire to be IAC [the firm behind Tinder], rather than [a social media platform like] Facebook.”

A (perhaps) cynical part of me thinks that Asia’s general reluctance to spend money on digital goods or premium membership services might be beyond this ambition to expand Paktor’s vision into non-romantic relationships, but Phua told me that — for now — those plans are exactly that, plans. The company is working on a series of ideas that will “take us down that path,” Phua said, but it will take some time before that manifests itself in actual features inside the app.