U.S.-based VC firm 500 Startups is launching a new accelerator program in Southeast Asia that is designed to help companies in the region that have raised money take their business to the next level.

The firm, which recently topped up its ‘500 Durians’ fund for Southeast Asia with an additional $5 million, has partnered with MaGIC — the startup and entrepreneurship program run by the Malaysian government — to launch the program in Kuala Lumpur from August. Each ‘Distro Dojo’ batch will run for 10 weeks and take in between 10 and 20 companies from across ASEAN who work with mentors and the 500 Startups network to scale their userbase, revenue, and other aspects of their business.

The program is based on 500 Startups’ existing support network for its portfolio companies, which dishes out this kind of consultancy on a bespoke basis. Now it’s being formalized and made open to all companies in Southeast Asia, not just those that 500 Startups has invested in. The U.S. VC firm actually launched Distro Dojo in London last month, but the concept began in Southeast Asia with a pilot run last year in Malaysia (with MaGIC) with four companies that raised over $7 million collectively.

“What do you do after you raise money? You need to spend it and spend it well,” Khailee Ng, 500 Startups’ Southeast Asia-based managing partner told TechCrunch in an interview. “This program is about helping startups work on specific growth goals. Not all startups have world-class customer acquisition chops.”

Southeast Asia’s Distro Dojo is expected to kick off in August. 500 Startups and MaGIC have committed to a three year partnership, which Ng expects will see 100 companies graduate the program. The terms will see 500 Startups invest $50,000 in each company — half of which goes to program fees, while the rest is budget — taking whatever equity that figure buys at the startup’s most recent fundraising. MaGIC is providing space and facilities within its MaGIC campus, and covering “some administration costs.

Ng said he believes that Distro Dojo is an important area that is particularly necessary in emerging markets like Southeast Asia.

“It’s a big problem that’s even bigger in emerging markets where you can’t just go to the pub to hangout with your friendly growth hacker next door. This this is very different [to other programs].

“Companies get prepped on unique growth problems and we set objectives for the end of the 10 weeks. Experts [brought into the program] work in the company… it isn’t like sitting in a class just listening. We think it’s the kind of thing founders can relate to,” Ng added.

The move makes a lot of sense for 500 Startups as it gives its portfolio companies a stronger shot at success, while increasing the firm’s network and relationships with successful startups and founders — the latter of whom may start new projects in the future and turn to 500 Startups for help.

Throw In A Little MaGIC

It’s also an interesting move from MaGIC, the government-backed program created to foster the spirit of entrepreneurship and startups in Malaysia. MaGIC — which stands for Malaysian Global Innovation & Creativity Center — just celebrated its first birthday — its report card can be found here — but it isn’t your average government agency.

First off, it is run by a founder. Cheryl Yeoh, a Malaysian who moved to the U.S., became an entrepreneur and sold her startup (Reclipit, which was a 500 Startups company) to Wallmart Labs in 2013. Yeoh, who won a scholarship to study at Cornell, upped sticks and switched San Francisco for Kuala Lumpur last June to head up MaGIC. 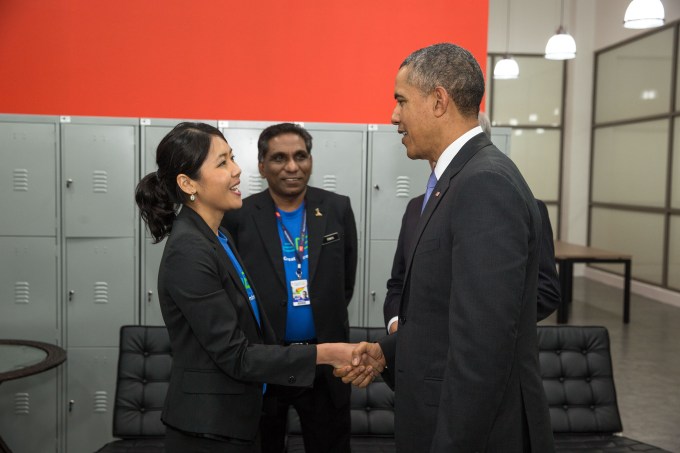 Her and the organization’s role is to turn Malaysia into a startup hub for Southeast Asia. MaGIC’s own accelerator program — MAP — kicks off at the end of the month with its inaugural batch, and Yeoh told TechCrunch that hosting Distro Dojo will prove beneficial for MaGIC and Malaysia.

“We’re trying to position Malaysia as a launchpad for ASEAN startups — a core focus is building this ASEAN community,” she said in an interview.

Ng, who is also Malaysian, explained that MaGIC and Yeoh were key reasons for picking Kuala Lumpur as the base for Distro Dojo, as opposed to a more obvious place like Singapore.

He added that 500 Statups wants “a Distro Dojo on every continent” worldwide, but launches will depend on finding the right local partners.

Companies can apply here to be a part of the first Distro Dojo in Southeast Asia, which kicks off in August.