Greg Galant Contributor
Gregory Galant is co- founder and CEO of Sawhorse Media the company that runs Muck Rack and The Shorty Awards.

Snapchat was the first social network I was too old to understand.

I joined Facebook as it first rolled out on campuses when I was in my junior year of college. I joined Twitter and Instagram in the very early days and even snagged my first name @gregory as my username on both. I scoffed at people who didn’t “get” these services. 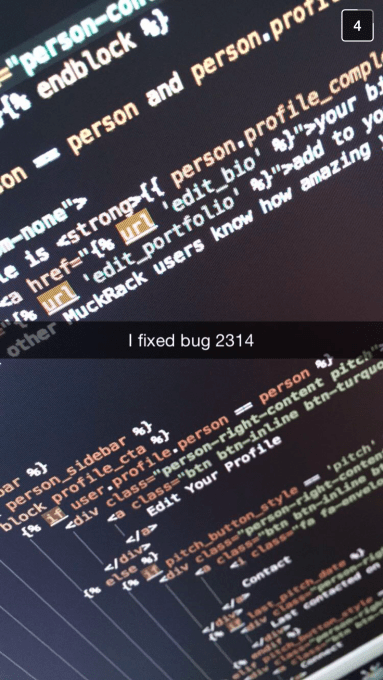 Then Snapchat came around. I downloaded it, but none of my friends were on it so I found it impossible to understand the appeal.

Most people could afford to adopt new social networks less quickly as they get older, but the company I cofounded, Sawhorse Media, runs The Shorty Awards which honor the best of social media and Muck Rack, a SaaS solution for PR and journalism with social media at its heart. It’s our job to understanding the latest trends in social media, yet many of us simply didn’t get Snapchat.

Thinking back to Twitter’s adoption curve, it was clear that people couldn’t really understand Twitter until they joined conversations on it. Until that point, you’d just hear people say things like “What can you say of value in 140 characters?”, or “Why can’t I just use a blog instead?”. Total immersion in Twitter was the only way to really understand Twitter. How could we get everyone on our team to fully understand Snapchat?

Then it hit me: We decided to declare one day at our company “Snapchat Day”. For that entire working day, all forms of internal communication, including email, IM, chat, texting, comments on Trello, bug reports on Github and even phone calls, would all be banned. All internal communication had to take place on Snapchat.

Snapchat Day got off to a rough start. Obviously Snapchat was not designed to be an efficient business communication tool, and it sure isn’t. Halfway through the day we all became pretty good at sending messages using the platform and learning the basics of its unintuitive interface. How do you report a bug over Snapchat? Take a photo of your commit.

Even taking orders for a team meal that we placed together by Seamless was a challenge: The youngest people on our team became mentors to the rest of us — and by rest of us, I mean pretty much anyone older than 25. They showed us how to change font sizes and colors, add filters and make Snapchat stories. By the end of the day we were mostly pros, and several of us still use it and have upped our game since.

Snapchat Day broke several of my preconceived notions about the platform. Snapchat has been portrayed as a network primarily for sending provocative photos and its users are thought of as irresponsible and naive to the potential for what they share to be captured or recorded. In reality, much of what’s posted to Snapchat is casual content (e.g. a photo of food, a silly selfie) that might otherwise not be posted on Facebook, Instagram or Twitter.

Compared to a social network where the default is that content is accessible to anyone, forever, Snapchat is much more responsible.

And now with Snapchat Stories, which enable users to post a string of photos or videos available to any of their friends for 24 hours, I’ve watched people become expert video storytellers. I wouldn’t be surprised if some future filmmaker credits her interest in cinema to using Snapchat stories as a child, the way many directors today credit their career direction to getting a camcorder as a kid.

If you find yourself and your team lacking understanding of a social network or new technology, don’t just read about how it works — you should completely immerse yourselves in it.

A media company that still doesn’t understand Twitter should declare a Twitter Day, and have everyone message each other over @reply for non-sensitive information or DM for private messages.

An American company targeting markets in Japan and Indonesia could have a Line Day (a message app that’s extremely popular in those counties).

A team preparing to build an Apple Watch app could challenge themselves to go a full day only communicating using the Apple Watch and its corresponding iPhone apps.

The best way to learn a technology is to use it. You’ll be surprised how much you can learn in a day.