PSafe, the leading antivirus player in Brazil, is announcing a $30M Series D to take its security and privacy app suite to the rest of Latin America.

PSafe has been offering its free app since 2010, but switched their focus from PCs to smartphones in the wake of Brazil’s exploding smartphone market, and now have 52% of the Android market in Brazil, representing over 40 million smartphones.

PSafe founder and CEO Marco de Mello says Androids represent a full 90% of Brazil’s 70 million or so smartphones – not astonishing when you consider that Brazil is still the most expensive country to purchase an iPhone. The country’s smartphone market currently ranks fifth in the world, with 1.4 devices per internet user, represents ⅓ of the smartphone market in Latin America, and is growing faster than any other country in the region.

“People are skipping PC’s altogether, especially lower classes in Brazil,” says de Mello. “They don’t have the money for a PC, but they have to communicate, so they’re buying a smartphone.”

The future is no longer about, ‘Is my phone protected? Is my car or house protected?’ It’s about, ‘Are the radio waves around me secure? Marco de Mello, PSafe Founder

The $30M Series D financing, led by existing investors Qihoo 360, Pinnacle and Redpoint eVentures Brazil, makes PSafe the first mobile startup in Latin America to reach a R$1B valuation (about $320M), and will allow PSafe to expand to the rest of Latin America. De Mello says it may be PSafe’s last round of financing, and that the company is on track to be profitable in 2016.

“Our goal was to get to 50% Android penetration in Brazil and then start expanding,” says de Mello. “We wanted to go back to our investors and say, ‘We’ve proven we can build and hold our own in the largest Android market in LatAm, and now we’re going to go to the second-largest, Mexico.’”

PSafe has a number of competitors in the security and optimization space in Latin America, including Avast, AVG, Kaspersky, Cheetah Mobile and Baidu, but they are all foreign players in the market. Baidu has made a particularly aggressive push into Brazil over the last year, flagging PSafe’s app as a virus and prompting PSafe to take legal action.

Baidu has lost two appeals but both parties are awaiting a final ruling. “They thought, if we attack the leading competitor and destroy them, maybe we’re good,” says de Mello, “but that backfired big-time.”

PSafe is the fifth most popular app in Google Play in Brazil (behind Facebook, Messenger, Whatsapp and Instagram) and has 1.4 million fans on Facebook, driving a healthy flow organic downloads. But the company also spends a lot of money on Cost Per Installation marketing, which de Mello says is the company’s single biggest expenditure. “On the cost side, it’s about staying ahead of the CPI explosion,” de Mello says. “Our CPI is going up on the buy-side because of Cheetah and Baidu, these guys are coming here and basically trying to spend their competition away.”

Because PSafe is entirely free, the company generates revenue by recommending apps and games to their users, offering targeting by geography, cell phone make and model, age and gender.

“We’ve built a humongous BI system focused on building intelligence on each user and what’s on their phones and what they do with them, in a secure, encrypted fashion, so we can recommend apps and games you have a high likelihood of liking,” de Mello says. Because they are a security company, PSafe only accepts advertisers that pass their security analysis for vulnerabilities. He says advertisers see a 2% average CTR and 70% average retention rate, proof that they are making effective – and quality – recommendations. 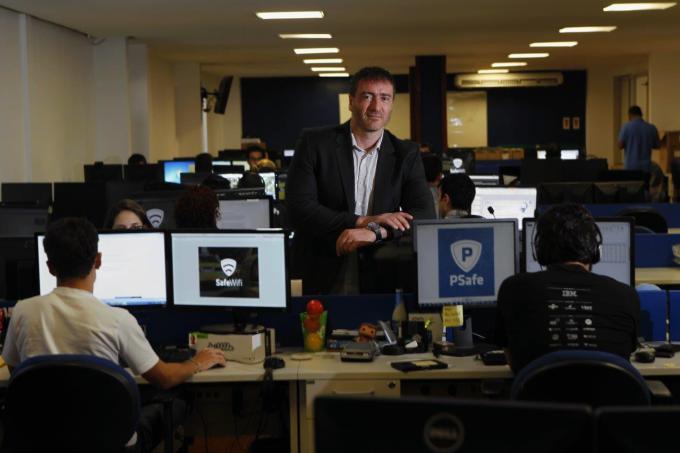 Facebook is PSafe’s biggest of about a dozen advertising clients, buying inventory to distribute offers from the Facebook Audience Network. “But Facebook has a very sophisticated platform already for targeting, so we don’t need to tell them anything,” de Mello says. “Because most Brazilian users have Facebook. The overlap of PSafe and Facebook on the same phone is over 90%. Facebook knows a lot more about my users than I do, because they have personally identifying information and I don’t.”

While PSafe is on track to be profitable next year entirely on the heels of advertising revenue, de Mello says it’s a challenge to strike the right balance being a security app and generating revenue. “How much advertising can you have in the app before it becomes detrimental to the experience, or annoying to the user?” he says. “That’s a line we tread carefully.”

But PSafe’s biggest challenge is security. De Mello, who used to serve as Microsoft’s Director of Windows Security, says Android is as exposed as Windows, if not more, because it is an open platform. He says PSafe is blocking virus attacks on 86,000 smartphones per day in Brazil, as well as another 400,000 malicious URLs, with a 99.9% detection rate.

PSafe is also rolling out an initiative called SafeWifi, where they will distribute thousands of free routers to wifi hotspots across Brazil to curb against wifi infections, the #2 source of infections PSafe sees on its platform. PSafe also shares data with a number of players that are competitors in the marketplace, but partners in the security space, including Quihoo 360, Microsoft, Kaspersky, TrendMicro and Intel Security.

The underground crime world and the mafia has evolved way past what authorities believe they have. Organized crime today is in the dark web. It’s not about a bunch of hideouts of people with guns — that’s so 90’s. Marco de Mello, PSafe Founder

But 99.9% is hard to keep up, de Mello says, and it’s getting harder. He says the threat landscape in Brazil is not unlike the rest of the world – there’s a high volume of silent attacks on personal data that gets stored and sold on the dark web, and a small number of highly specific Advance Persistent Threats that can sell on the dark web for thousands to millions of dollars — think stuxxnet. One trend at the moment: ransomware attacks, where the malware locks your phone and puts the bank information for you to make a deposit, and the hacker will only unlock your phone if you make the deposit. “Someone who has that infection is fucked until they pay the ransom,” de Mello says.

De Mello looks at the threat landscape online as nothing less than digital warfare – replete with arms proliferation and electronic weapons of mass destruction. “We’re on the dark web all the time,” he says. “We have to monitor it very closely. There’s scary shit that goes on there. But it puts into perspective how the underground crime world and the mafia has evolved way past what authorities believe they have. Organized crime today is in the dark web. It’s not about a bunch of hideouts of people with guns — that’s so 90’s. Now it’s about people remote-controlling crime invisibly. The mafia is quickly learning that hiring high-end hackers on the dark web is far more lucrative than people with guns to do anything for them. That’s the scary part.”

“Now let’s fast forward,” de Mello says. “We’re talking about an internet of things, connected devices, your clothing, watch, TV, fridge, chip in your brain, car, your whole life is connected. We have to evolve as a security company to move away from this idea of security spaces and security environments, like a device or router or network, and really focus on these security contracts, which is all these protocols. Anytime an electronic conversation can take place, it has to be audited, inspected, carefully analyzed. So the future is no longer about, ‘Is my phone protected? Is my car or house protected?’ It’s about, ‘Are the radio waves around me secure?’”

In de Mello’s future, it’s not a matter of whether we share our information, but who we trust to keep it safe. “The illusion of, ‘I can keep myself safe alone, I don’t need help’ — electronically, that doesn’t exist,” he says. “The human brain cannot maintain a human electronically safe. It has to be an electronic brain. Because you’re fighting electronic warfare. Maybe in the future with implants and nanobots, and who knows, but with today’s biology you can’t.”

And for now, there’s plenty of work to be done with plain old manpower, hardware and a fresh injection of venture capital. “Security in an electronic world is job security for us,” de Mello says. “It’s forever. It will never end. We could be doing what we do at PSafe for the next 30, 40, 50 years and we’d still be in the same race.”