Users can dive into a neighborhood and swipe through various restaurants with recommendations from chefs, and also view recommendations of specific chefs at restaurants. Throughout the new app are huge photos of those dishes, making it feel like Houzz but for ridiculously good-looking

food. ChefsFeed available in more than 50 cities. The goal is to bring the recommendations of some of the best chefs in the area that might not be as famous as the celebrity chefs, CEO Rich Maggiotto said.

“Here’s the reality: there are 110,000 chefs in North America — there are 2-3% of them influencers, and of them there’s an elite group of major celebrities, mostly thanks to the likes of Food Network,” Maggiotto said. “There’s this tier of celebrities that are almost like global celebrities, and then there’s this whole group of phenomenal chefs that have reputations regionally or in their city. We have all of them.”

ChefsFeed also has more than a thousand chefs adding dishes they admire outside of their own kitchens, as well as dishes they cook. For example, a chef might post one of their favorite burgers in the city — and if they have a lot of followers, they will want to share their own creations on ChefsFeed.

ChefsFeed started off with a small group of chefs that wanted to create a different kind of Yelp, Maggiotto said. The group started recommending dishes outside of their kitchens, and then once the first big batch of people started downloading the app, chefs started posting events in their own restaurants in kitchens. 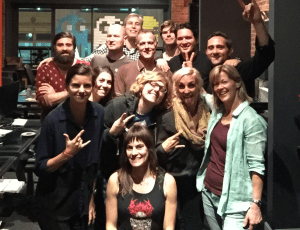 Naturally, Maggiotto’s mom was a caterer — hence his passion for food, but prior to joining ChefsFeed a year ago he came from the mobile media side, a digital publishing service. The rest of the team is made up of cooks as well. Prior to this relaunch, ChefsFeed raised $8.2 million in venture financing.

“It’s become a platform where chefs are talking to their very best diners,” Maggiotto said. “[The chefs] might not eat at Thomas Keller’s Per Se, a lot of the content is the serendipitous hole in the wall places. Maybe there’s just one good dish at that restaurant, but they totally kill that cabonara.”