In a bid to appeal to different segments of the global smartphone market, LG has released another new version of its flagship G4 device. Following on from on from phablet and budget models unveiled in May, the Korean company today announced the G4 Beat, a mid-range incarnation.

Sporting the same aesthetics, the G4 Beat is slightly smaller than its parent model at 5.2 inches — the G4 is 5.5 inches — while there’s a downgraded eight-megapixel rear camera and five-megapixel front-facing camera. The chipset is also more modest — that’s what you get for mid-range — in the form of an eight-core Qualcomm Snapdragon 615 Processor that clocks 1.5GHz. In addition, the onboard memory has been shrunk to 8GB with 1.5GB RAM.

LG said the new handset “retains the best features and functions of the LG G4, delivering value without compromising performance or usability” and it’s an impressive package, except that we don’t know the retail price at this point — other than that it is “mid-tier.” (We’ve asked LG whether it can be more specific here and we’ll update if we hear more.)

Update: The ballpark figure for the device is €400 (around $440), but exact pricing will vary in each market, LG tells us. 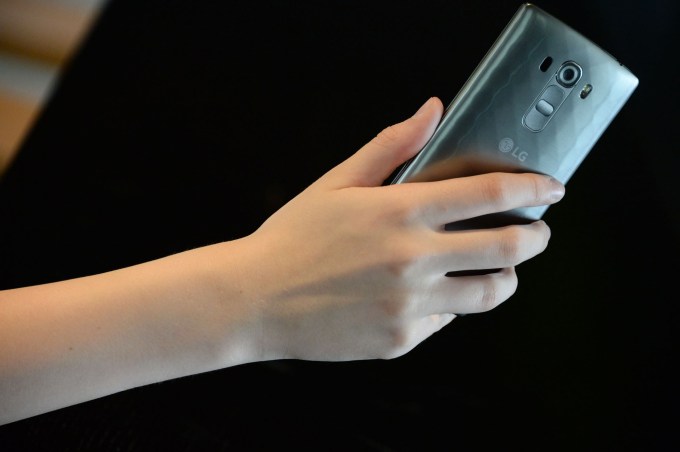 “Too often, mid-tier phones sacrifice overall usability in order to include that one killer feature,” said Juno Cho, president and CEO of LG Mobile, said in a statement. “Our goal with the LG G4 Beat was to create a phone that was not only well- balanced in terms of display, camera, performance and design but delivered terrific value and satisfaction.”

The G4 Beat will debut in “key markets” in Europe and Latin America this month — some of those countries include France, Germany and Brazil — with a more global rollout coming soon after. LG’s multiple model approach and its mid- and low-end portfolio helped it rake in $475 million in profit last year — compare that to struggling fellow Android maker HTC — as it shipped 59.1 million smartphones. The Korean tech company will hope this approach produces similar results for the G4 series in 2015.