Whipclip, the makers of a mobile application that lets you quickly – and legally – share clips from favorite TV shows and music videos, has closed on $40 million-plus in Series C financing, the company is announcing today. The oversubscribed round was led by asset management firm, Eminence Capital, and included participation from existing investors, Institutional Venture Partners and Raine Ventures.

Sources tell us that Whipclip was approached by a number of investors and content partners after it launched. It decided to close now on this over $40 million round, but saved some room for content partners to invest as well.

Other prior investors in Whipclip include William Morris Endeavor, Ziffren Brittenham, Greycroft, and individuals from the media world such as Ari Emanuel, Peter Guber, Steve Bornstein, Scooter Braun, Gordon Crawford, and Ron Zuckerman.

Though already on its Series C, the startup only launched its iPhone app this March.

Thanks to its industry connections, Whipclip’s initial lineup of partners included a number of big TV networks, including Comedy Central, ABC, CBS, FOX, VH1, A&E and Lifetime, Bloomberg, OWN, and truTV, for example. And on the music side, Whipclip works with Universal Music Group and Sony Music. While some of its partners viewed Whipclip as more of an experiment, the sizable group gave the app a decent catalog of shows to offer to users right out of the gate, with popular programs such as Bob’s Burgers, Castle, Charlie Rose, Dancing With The Stars, The Late Late Show With James Corden, NCIS: Los Angeles, New Girl, and Once Upon A Time available in the app.

That catalog has since expanded, and there now are dozens shows to clip from today. The company also now works with Turner, Viacom, Fusion, and Pop, and it has partnered with Bellator MMA to bring sports to its lineup.

To distribute its clips more broadly, Whipclip partnered with over 25 publishers who are using the service to post legal video clips in their stories and articles. For example, a publisher might grab a clip from a show like Dancing with the Stars which it would then publish immediately after the segment aired on TV. For that particular show, says CEO Rich Rosenblatt, who was previously co-founder of Demand Media, Whipclip sees 78 percent of readers watching the entire clip.

To see what these embedded clips look like in action, you can check out this So You Think You Can Dance review on International Business Times, or this The Bachelorette recap on USA Today, for example. 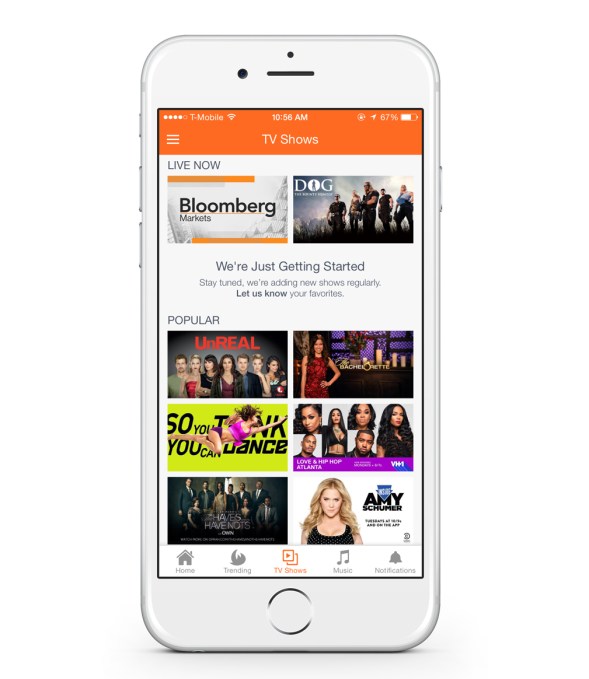 The focus of the app itself is largely on live TV, as Whipclip allows you to launch the app and create clips from the last 2 minutes of a show that’s currently airing. That may not be the best solution in today’s time-shifted world, however, so it’s good that Whipclip also lets you access any of its shows or videos, even if they’ve already aired. After you create your clip, the snippet can be posted to social media platforms like Facebook and Twitter, as well as shared within the app itself.

The brevity of the clips themselves tie in well with the broader trend which sees users consuming more short-form video while on mobile devices – a shift that has sparked the popularity of other quickly digestible media, like Snapchat Stories, Vine videos, or Tumblr’s GIFs, for instance.

Rosenblatt isn’t disclosing the size of Whipclip’s user base or its revenue at this time, but notes that some of its clips – like its fight clips from Bellator, or those from live events and award shows (e.g. the Critic’s Choice Awards and the Daytime Emmy Awards) – have seen millions of views.

The company now has 50 employees in L.A. and Tel Aviv, and will use the funding to accelerate product development (hopefully getting its Android app launched), as well as expand operations and content partner relationships.