After running silently in a public beta for a few weeks, Lynx — an app that builds a stream of links shared between friends — is opening up to the rest of the world.

Lynx’s primary purpose is a private sharing channel between friends for sharing links. Rather than showing up as text, the links show up as a stream of small images with text overlaid on them that serve as the “headlines” of those links. They can be stories, or pages on Amazon, or even just photos that don’t require clicking through to the actual link. The page shows up in Lynx, making it easy to jump in and out of other sites and share them with friends. 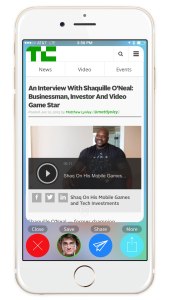 To be sure, there are plenty of other ways to share links like Facebook and Twitter, but those for the most part are designed to be broadcasts to an entire group of friends or an audience, Canetti said. Links are still mostly sent through email, which are then trapped in massive inboxes and often not even found or clicked through, he said. But there’s a good reason it goes through email: it’s easy to send a link through email and Gmail, for example, has hundreds of millions of users and is one of the largest communication platforms in the world. Facebook Messenger and Twitter DMs are a bit closer to the goal of Lynx, but even then it’s likely that they’ll just get lost in an inbox, he said.

“I’ve seen a lot of link management tools, that are real utilities, and they feel like utilities,” he said. “It feels formal. I want this to be social, fun, colorful, loose, and it gives a levity to what otherwise typically would be a list view and a tiny thumbnail with headlines. That Lynx [makes your life more efficient] is a byproduct — to me good design represents both. If you make something efficient just for efficiency’s sake, it typically isn’t fun or functional. If you build something just to have a good time, often you end up with something that’s more cumbersome.”

Lynx has its roots in an app called Stream that was built inside Canetti’s previous company called MAZ, a startup that helps media organizations build apps for their publications. MAZ was bootstrapped for much of its life, though eventually it raised $2 million from a number of venture capitalists and angels. Lynx, which internally was an app called Stream before evolving into its current form, was “incubated” in a way within Maz before spinning off into a different company.

These sorts of spin-outs aren’t that uncommon. For example, out of Justin.tv, founders Michael Siebel and Justin Kan spun Socialcam out of Justin.tv — which went on to become Twitch — and then sold to Autodesk for $60 million. And that helps for raising money too, as the same investor base of an enterprise-ish service like MAZ and an app like Lynx probably look quite different. 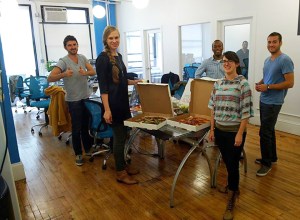 Lynx will face the classic chicken and egg problem: in order to bring in users, there has to be content, and vice versa. That’s where the other part of Lynx comes, where Canetti hopes there will be enough content from the get-go that new users will find it useful and connect with their friends.

And of course, building a consumer app is a different challenge than building an enterprise service like MAZ, and the same goes for building the business. The challenge will be building a strong community that can be monetized in some form instead of signing additional contracts with publishers in the way MAZ works.

“To me the business angle is really thinking about growing this community and thinking about how big of a market there is for sending and receiving stuff that you find on the internet,” he said. “It’s almost like in the way that Instagram is a way to represent what you find in the real world, Lynx is a parallel track of things you find or discover while you’re online, and having a fluid and fun way to share those moments with your friends. To me, that’s much more than just sending articles back and forth. It’s really about communicating and connecting with people you know, with friends and family, doing it through content that already exists.”