We all know telecoms are evil.* But as an individual, there’s rarely a way to fight back.

Enter CrowdSuit, a new company that aims to help phone customers seek legal redress against phone companies even when they cannot file class action suits. Telecoms increasingly are including a contract provision that prevents customers from filing class action lawsuits against them.

Because the cost of an individual lawsuit is often greater than the damages a customer would receive if they won a suit on an issue like throttling, it’s not worth it for them to sue alone. As a result, no one sues, and the telecoms get a free ride. In some states just filing a lawsuit would cost $70, and the amount customers could win by filing would be far less than that.

Ben Kinney, CrowdSuit CEO and founder, said he has found a way around these contract provisions with class alternative litigation. Rather than filing a class action suit, a large group of customers “assign” their claims to Crowdsuit. Crowdsuit then files the suit in court. Kinney said he believes these suits will stand up in court as there is a strong precedent for assigning claims. The practice is commonly used when an insurance company sues on behalf of a policy holder.

According to Kinney, the CrowdSuit method can be applied to a variety of legal situations with companies that are increasingly requiring users and employees to waive their right to file a class action suit. He said the practice could be applied to suits against companies like Uber, which began including a no class action provision in its driver contracts after facing class action suits from contractors.

But first Kinney wants to fight AT&T on throttling, the mobile wireless provider’s practice of slowing down unlimited users’ Internet service in response to them using more than 5 GB’s of data in a month. The practice is intended to encourage unlimited users to switch over to tiered data contracts, where the company can charge them for data overages. Because the unlimited data option was discontinued in 2010, it’s essentially a way for the company to screw over its most loyal customers.

The company has been hit with a lawsuit from the Federal Trade Commission and a record breaking $100 million fine from the Federal Communications Commission. The practice was also outlawed by the recent net neutrality order that went into effect last month. But Kinney says private individuals have been unable to seek damages because they cannot file class action suits.

But Kinney does not think that action is enough to force AT&T to change course. On June 26, CrowdSuit filed against AT&T in Minnesota for $15,000. Even with the recent action from government agencies, Kinney said people have the right to do more.

“It’s a little better when you have private entities doing this enforcement because the government is not historically good at punishing the wrong doer,” Kinney said.

As an unlimited AT&T customer, I can see why this type of action is needed. Just days after the net neutrality order went into effect and AT&T was hit with the lawsuit, I received this message. 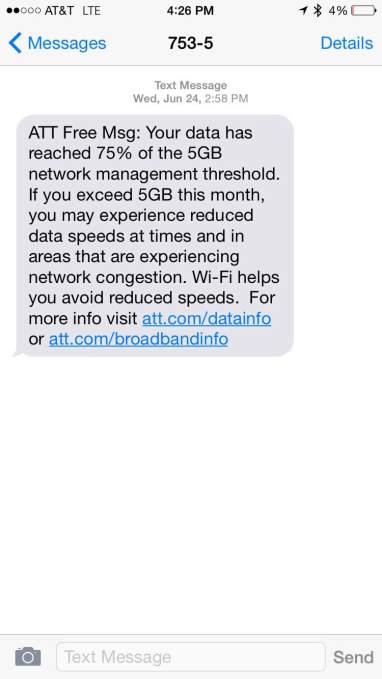 Although the first CrowdSuit filing is only for $15,000, an amount that a telecom giant like AT&T would barely sneeze at, it could mark the change of tide for customers seeking better service from their telecom providers. After tackling the issue of throttling, Kinney said he plans to address other ways he thinks AT&T is exploiting customers, such as by tacking on a $0.61 administrative fee per line.

“When they have class action waivers, these companies can pretty much steal from their customers as long as it’s a small amount,” Kinney said. “It adds up.”

* Sorry Verizon! Thanks for the paycheck, bae <3