Jason Kneen is a programmer and happens to own about a hundred domain names picked up over a sixteen year period. One of those, workbetter.com, he purchased in 1999 and it has been available on his site for years. In late April 2014 a company, OfficeLinks, approached him about buying the domain for use as a URL for their co-working space.

@jasonkneen @hjmehta Jason: We're sorry about this – it was an internal mix up and the error has been corrected. 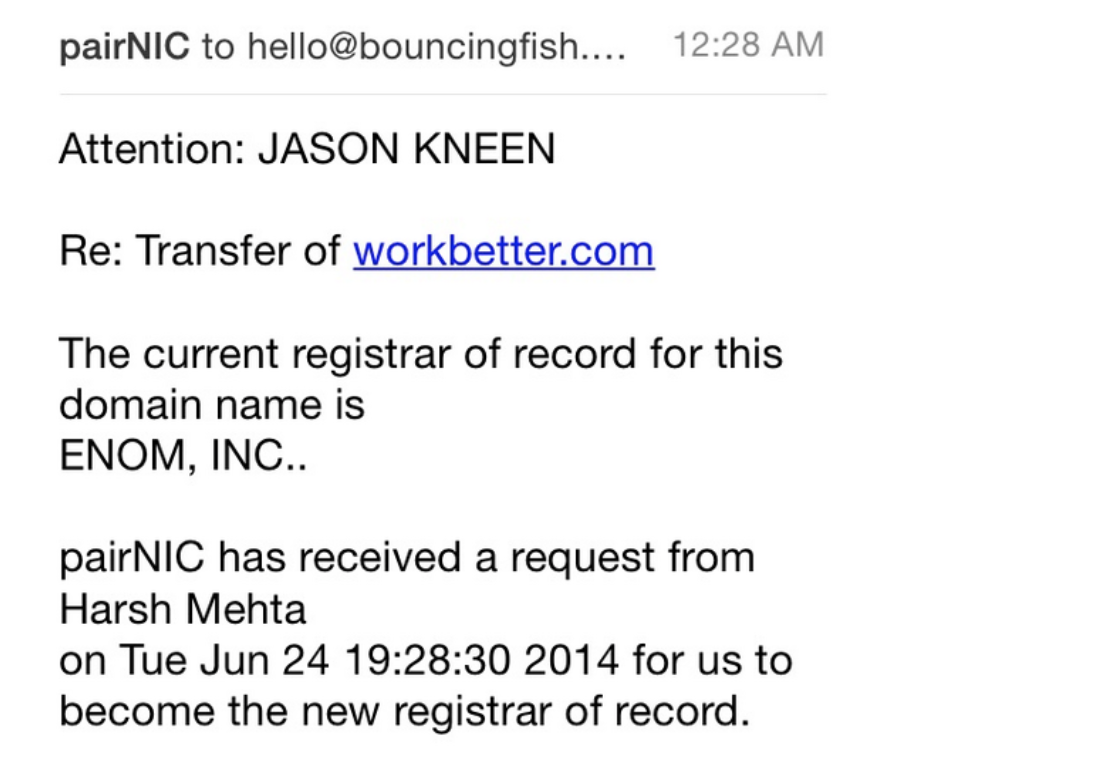 It’s a tale old as the Internet: someone has and idea and the URL is taken. The owner and the startup hash out a deal and sometimes those deals fall through. When that happens most startups head back to the drawing board. For OfficeLinks, however, it was straight to the lawyers.

The story began in April, 2014 when the co-founder of OfficeLinks, Harsh Mehta, approached Kneen about his domain. OfficeLinks is a growing co-working space business and Mehta recently purchased WorkBetter.us for use in the service. Kneen asked for an offer and Mehta proposed paying $500. Kneen was willing to sell the WorkBetter.com domain for more money but was concerned that Mehta would simply resell the domain to a bigger client. Mehta made it clear he was interested only in the name and Kneen reconsidered briefly, even proposing some restrictions including a required payment if Mehta resold the domain. Ultimately, however, Kneen refused to sell.

Mehta filed an intent-to-use trademark application for Work Better on April 25, 2014, a few days after Kneen renewed the domain and, most important, 16 years after Kneen first registered the domain.

In late June 2014 an “over-zealous” employee – according to Mehta – began a domain transfer for the .com name via PairNIC, a domain name service. This attempt would have failed because it required Kneen’s approval and Kneen took to Twitter to address the problem. The interaction between Kneen and Mehta was friendly and Mehta apologized. Kneen thought that was the end of the problem.

A year later, on June 29, 2015, however, Kneen received a call from DomainNameWire, a site dedicated to domain name news. Their story detailed a lawsuit against Kneen for cybersquatting – essentially the crime of holding a trademarked domain for ransom. It was the first time Kneen had heard of the lawsuit.

Cybersquatting is nothing new and it has a very precise definition. The Unified Domain Disupte Resolution Policy states that those claiming cybersquatting must prove:

“This is a dispute between a company that is trying to protect its trademark, and make genuine use of it, and an ideology that entitles individuals (and businesses, including Jason Kneen’s) to hijack existing and prospective trademark registrations for $18/year,” said Mehta. He believes Kneen is holding the domain illegally.

Mehta and his legal team filed a lawsuit agains Kneen for cybersquatting in New York Federal Court even though Kneen lives in London. The resulting lawsuit led to a post on Domainwire from which Kneen learned he was being sued. His domain name provider even locked the domain during the dispute, a move that prevented Kneen from taking control of the record.

At this point, on July 3, the domain is still in limbo with Kneen refusing to sell and Mehta’s lawsuit hanging over Kneen. The unfortunate thing about the case is that both parties are Internet natives and, Mehta especially, part of the startup ecosystem. While cybersquatting situations are frustrating, this is not the case of someone trying to grab Sony.com in the early days of the Internet. Kneen decided he didn’t want to sell and Mehta, in short, is using the legal system to ensure an outcome beneficial to himself.

“Without being specific to this case, people in the UK generally shouldn’t be dragged into a NY Federal Court because someone merely approached them to buy their domain name and was told no thanks,” said Michael P. Eddy, a patent attorney. Many domain experts at DomainNameWire agree, citing a number of examples of bullying by companies hell-bent on acquiring a certain domain. Ultimately this will be, at best, a slightly expensive legal battle between two small players. But the precedent it sets – that a startup should bully domain owners out of their property – is a dangerous one. Mehta declined to comment further and now it looks as if the lawyers will have to solve this sad dispute.