We tend to think of disruption as kind of a passive activity. The determined upstart enters the market and the established business doesn’t give it a second thought. Then ever so slowly before it can even react, the industry suddenly realizes it’s lost control.

In most cases, the incumbent tries the usual tactics, perhaps making a half-hearted effort to change strategies to be more like the newbie, or calling on politicians to help save them. We’ve seen that with both Uber and Airbnb as hotel and taxi industry leaders have tried to outlaw or regulate the nuisance out of existence.

Every once in a while though, they fight back with a vengeance, as we saw in France last week, where the incumbent business clearly had enough.

The taxi industry at its core is just regular Joe (or Josephine) Schmoes who are staring into the gaping abyss of disruptive change and seeing their very livelihoods being undermined. And they are none too pleased. 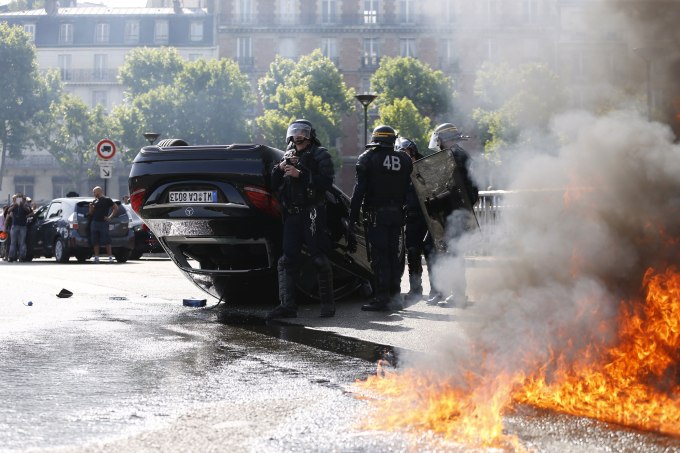 In France, last week, that frustration led to a major strike with reports of violence including attacking Uber drivers, threatening their passengers and burning cars.

Then earlier this week, the government struck back on behalf of the industry, as French authorities arrested Uber executives in France and charged them with running an illegal taxi service.

As TechCrunch columnist Danny Crichton pointed out in a recent post, Uber arrogance hasn’t helped defuse this situation, but then you can’t really compromise when it comes to disruption. It has a life of its own and by its nature it’s supposed to destroy the dominant paradigm.

What exactly do you do when your opponents are willing to flip over cars to stop any technological progress? The idea that these two sides can sit at a table and find an agreement that is good for everyone is simply a fiction.

Last time I was in New York City, I flagged down a cab. As I settled into the backseat, the driver told me he only took cash. I told him I didn’t have any and if he wanted the fare, it’s a credit card or nothing. He took the fare.

More recently I was in San Diego and the hotel website estimated it was $45 (plus tip) for a taxi to the airport. I took an Uber for $25 and had a nice conversation with a transplanted New Yorker.

Consumers like this approach or it wouldn’t be undermining the traditional model. The obvious question is why hasn’t the taxi industry adjusted?

I can understand the frustration of taxi drivers, but I also see the beauty of the ride share model. I don’t have to stand on a corner hoping a car sees me. My credit card is charged automatically. I get to where I’m going and hop out (and in my experience the drivers are almost always pleasant).

I’m not alone obviously. Consumers like this approach or it wouldn’t be undermining the traditional model. The obvious question is why hasn’t the taxi industry adjusted?

I remember a discussion years ago when a similar scenario played out in the newspaper industry, another business that took far too long to respond to disruptive agents.

You may recall that newspapers were undermined at least partly by Craigslist. Without the papers knowing or too arrogant to care, it began cutting into the highly lucrative classified ad business. It wasn’t as though Craigslist required some sort of super algorithmic genius. It was after all (and remains) literally an online list, but it managed to help cripple an entire established business model.

Note, however that newspaper reporters and classified advertising sales teams didn’t march on the Craigslist offices when they realized what had happened. It just happened and we moved on, but not every group is content to watch their jobs disappear without any challenge whatsoever.

Why Do Cabbies Fight?

When Uber comes into a city, there is usually a significant direct impact on the cabbies and they can feel the results in their pocketbooks immediately. They can see people waiting for their Ubers. It’s in their faces and impossible to ignore. Other industries don’t necessarily feel it as acutely as cabbies have.

In the late 1990s and early 2000s, it’s unlikely many newspaper employees understood what was happening to them or why. They might have sensed it was the Internet, but how could they know for sure? It could just as easily have been other economic factors they knew nothing about. They couldn’t point a finger at a disruptive force and definitively say it was the reason.

The cabbies can and they have a target they can lash out at.

We have seen strikes in Boston, London and other major cities when Uber sets up shop, but French cabbies in particular have a strong union and they have put it to work on their behalf. They have a history of standing up for their rights and when they see a threat, they are used to fighting it. Uber is a clear threat to them and they have responded.

And in this case, the union bit back hard. We can probably expect more of the same in the future. Whether you agree or not, all of this should be a wakeup call for startups. Sometimes it doesn’t matter how great your idea is or how many consumers respond.

Founders have to realize that there are always going to be groups who feel alienated by their products and services and whose very livelihoods could be affected — and some will end up fighting them tooth and nail.

Update 7/3/15: Uber announced today it was suspending UberPop (the service known as UberX in the US), which allows anyone to run a taxi without a special license.