Headquartered in D.C., sweetgreen was launched eight years ago by Georgetown students Jonathan Neman, Nicolas Jammet, and Nathaniel Ru. They were bored with the local dining options in their price range, so they raised a few hundred thousand dollars from 40 friends and family members to get the sweetgreen concept off the ground.

Today, sweetgreen operates 29 stores on the East Coast, and just expanded to California with an LA outpost. The company has plans to open another ten locations nationwide in the next year.

With a menu that features both the “Beets Don’t Kale My Vibe” and the “Rad Thai” salads, it’s clear, almost painfully so, that sweetgreen is trying to build a lifestyle brand catered to millennials. The company even hosted its own music festival in Maryland last month. 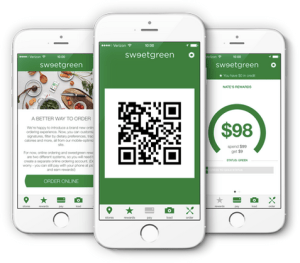 Like many other food startups these days, sweetgreen is focused on building out its mobile ordering app, which currently processes a quarter of all transactions.

“Food is the last frontier of mobile,” says Neman. “There’s been very little done to connect restaurants with their consumers and leverage tech to make that a better experience, and we want to lead that charge.”

In that aim, a good portion of the financing will go toward hiring a team of developers to bring all tech work in-house.

“Fast food has had a nice run for a decade, led by McDonald’s, but fast casual concepts like Chipotle and sweetgreen are beginning to eat into the fast food share of the food industry,” says Steve Case, founder of Revolution Growth and former co-founder and CEO of AOL.

“In the next decade or so, every facet of how food is produced, distributed and consumed is likely to change.”