Certain high-end nail polish colors have almost a cult-like following on the Internet. Devotees scour the web and share tips and links via Pinterest, beauty blogs and Reddit discussions in pursuit of the perfect match to that limited edition Olivia Palermo Red Hutch or Christian Louboutin’s Python.

Enter SuperDuper, an iOS app that matches those high-end hues with grocery store brands of similar – if not the same – color.

SuperDuper creator Lizzy Klein told TechCrunch she got the idea for the app during a shopping trip at Sephora. Klein started wondering if she could find less expensive versions of these high-end products at the drug store. Nail polish seemed to be the easiest place to start.

But it’s a process to get those matches. Klein tests every single color on the app herself. “We do it the hard way – manually,” she said.

I’ve had execs from Estee Lauder and OPI and others and all of them say ‘of course all the products are the same’ and at the same time they can’t do that publicly. Lizzy Klein, SuperDuper

Those using the app also send their recommendations to Klein, but she said those recs are often wrong. “How it looks in the bottle is not necessarily how it looks once the nail polish hits oxygen,” she said. 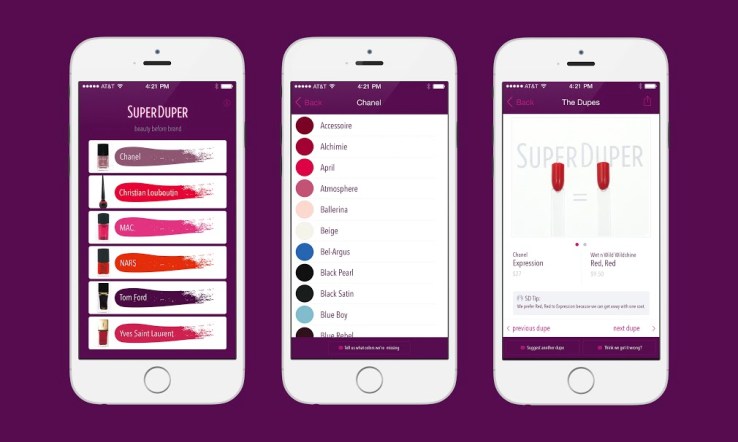 She paints a lot and tests everything in a different light to ensure that Sally Hansen red is the same as the NARS version.

That’s a lot of leg work and doesn’t seem possible to scale. That’s where relationships come into play for SuperDuper. Certain industry experts send her the colors and tell her what the drug store dupes are, according to Klein. She couldn’t name names, but did say there were three main factories that make most of the color cosmetics for both high and low-end name brands.

“I’ve had execs from Estee Lauder and OPI and others and all of them say ‘of course all the products are the same’ and at the same time they can’t do that publicly,” Klein told TechCrunch.

The app works by selecting the name brand nail polish you want to find the dupe for and then picking out the color you are searching for. Select Chanel from a list of brands on the app and then choose the Bel-Argus color, for example. SuperDuper will then pull up OPI’s Miss Piggy’s Big Number as the dupe. According to SuperDuper this is a match, but Bel-Argus retails for $27, and Miss Piggy’s Big Number goes for a mere $9 at the corner market.

Klein is going for user acquisition before launching a monetization plan for the app but said she has some ideas about sponsorships and subscriptions typical of the industry. She’s also looking to raise $1 million in seed at the moment.

Klein has so far raised $300,000 from various investors and added an advisor from L’Oreal to the SuperDuper board.