Up-and-coming video streaming service aimed at cord cutters, Pluto.TV, will now be distributing Hulu’s free content, thanks to a new distribution agreement between the two companies. For Pluto TV, the addition means its service will now be able to offer a wider variety of mainstream fare, including popular shows from networks like ABC, NBC, and Fox.

The deal was first reported by Variety, which noted that the content will include a variety of current and older shows, like “The Tonight Show Starring Jimmy Fallon,” “Jimmy Kimmel Live” and “Saturday Night Live”; as well as “Seinfeld,” “Star Trek,” “Cheers,” “Buffy the Vampire Slayer” and “Happy Days,” for example.

However, the nature of the agreement between the two companies is not quite as extensive as something like Hulu’s recent announcement that it’s distributing Showtime, for example. Where that involved both a business partnership and deeper technical integration between the two companies, Hulu’s involvement with Pluto TV was mainly about making its web player a bit easier to embed on the Pluto TV website.

There, users will be able to watch Hulu’s shows – as well as view the ads powered by Hulu’s ad server. That means the Pluto TV deal is similar to those Hulu has formed in the past with companies like MSN, Yahoo and AOL.

It also means the deal is fairly limited in its nature. While Pluto TV is today available across a number of platforms, including web, iOS, Android and via streaming media players like Amazon’s Fire TV and Fire TV Stick, Chromecast, AppleTV (via AirPlay), Android TV, and Samsung Smart TV’s, the Hulu content will only work on Pluto TV’s website and on Android, we understand.

In addition, Hulu’s programming will only be available in a new “on demand” section coming to Pluto TV’s site, and not the linear streaming area.

That being said, for fans of Pluto TV’s service, the Hulu integration is notable. The company today offers an interesting competitor in the world of streaming video services that are aimed largely at the younger demographic – the “cord cutters” and “cord nevers” who are forgoing pay TV subscriptions in favor of streaming services like Netflix combined with free video content, like that from YouTube.

Pluto TV is capitalizing on this shift in user behavior with its service, which lets you watch over 100 channels online and through its cross-platform apps. The channels are organized by interest into categories like music, sports, entertainment, comedy, lifestyle, tech, education, kids and more, and are organized into an online “TV guide” type of interface. The idea is to help users discover web videos they like and allow them to personalize the experience further by building their own custom lineups of favorite shows. 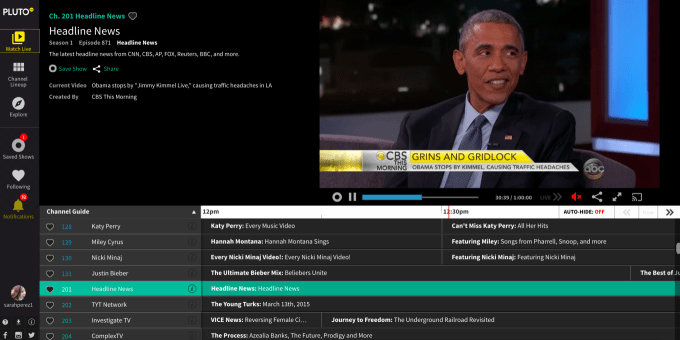 The video streams, meanwhile, come from a variety of sources, including YouTube, Vimeo, Dailymotion, Funny or Die, and elsewhere. Being able to now include Hulu into this mix will greatly expand Pluto TV’s content selection, even if it’s only the free programming that’s available.

Pluto TV, which is backed by over $13 million from USVP and others, is still an early stage startup, so it isn’t yet disclosing its reach – or rather, what Hulu is getting out of this distribution deal. But according to CEO Tom Ryan, the company is “delivering millions of video views daily.”

“We have an engaged audience that a company like Hulu is attracted to,” he says. “We think it’s a landmark deal for Pluto TV. Our promise is to combine traditional and digital content in a lean-back TV experience and this deal goes a long way to deliver on that promise.”