One of the surprisingly better features found in Apple’s new streaming music service, Apple Music, which launched yesterday to much fanfare, is its human-DJ’d Beats 1 radio station which broadcasts to 100 countries worldwide via the Music app on iOS devices and via iTunes on the desktop. But while the service will be made available to Android users this fall by way of a native mobile app (yes, Apple is building Android apps now!), there wasn’t a way for non-Apple customers to tune in.

Well, until now: Developer Benjamin Rumble stumbled across an unencrypted stream for Beats 1 radio and embedded it on his own personal website. By accessing the site from your Android browser, you’re able to listen in to Beats 1 with only a slight delay from the live stream heard on Apple devices.

According to a Twitter post by Rumble, the web stream is a “very unofficial” way to access Beats 1 from various devices, which means that it may not work indefinitely. Rumble explains that managed to find an unencrypted HTTP Live Streaming (HLS) URL for the service and decided to post it to his website. The stream allows users to listen to Beats 1 on iOS 6+ devices, Android 4.1 and higher, and via Safari on OS X, he says.

Rumble, an Apple user, tells us that he decided to look for a stream yesterday when he wanted to listen on the desktop and his phone battery was low. (This was before the launch of iTunes 12.2.) He notes that Timo Hetzel actually found the encrypted, unusable stream URL, and then he tested changing the URL from “/hub02/session02/” to “/hub01/session01/.” When he found the unencrypted stream, he just added it to an HTML5 <audio> tag.

We tested it today on a Nexus 5 running Android version 5.1, and it does appear to work as advertised. The music played without interruption, though it was a few seconds behind the live stream that was playing on an adjacent iPhone 6. Of course, as word gets out about an Android-friendly Beats 1 stream, Rumble’s personal site could crash under the influx of new traffic. 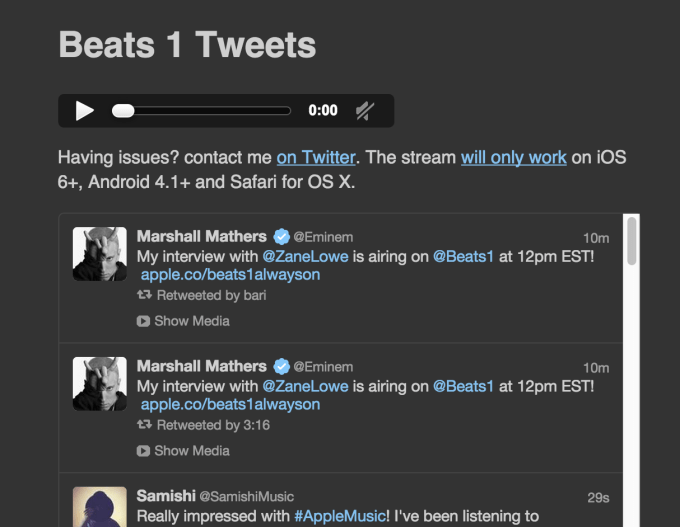 However, the developer isn’t the only one digging around for other means of accessing the Beats 1 service beyond Apple’s ecosystem.

On Reddit, users have found additional URLs for audio streams that can be accessed outside the iOS Music app and iTunes 12.2. The streams will only work in the countries where Beats 1 operates, and listening to the streams does require a player or app that supports the HLS protocol. There are a number of these available, though, including Safari (OS X/iOS), Chrome (Android/iOS not desktop), Quicktime X (OS X), Microsoft Edge (Windows 10), Media Player Home Classic (Windows), TuneIn Radio (iOS/Android), and others listed here.

In other words, the discovery of these web streams means that not only will Android users be able to listen in, so will users on other desktop platforms who don’t have the latest version of iTunes installed. It’s possible that Apple will start shutting down these unofficial access points to Beats 1 as awareness grows, so if you’ve been curious what all the fuss is about, now is the time to try it.

While the idea of a real-time radio service mimicking terrestrial radio at first seemed anachronistic in an age of on-demand streaming, Apple’s Beats 1 is proving itself – at least in these early days – as an interesting way to discover new music. Its DJs, led by Zane Lowe previously of BBC’s Radio 1, are helpfully surfacing new tunes, and explaining why they’re interesting in some cases, while also playing more popular and current fare without the constraints of having to follow corporate-driven, algorithmically programmed playlists.

The formula is working so far. Beats 1, though requiring listeners to have fairly eclectic and diverse musical tastes to enjoy all its shows, is a decent way to enjoy good music without having to think about what it is you want to hear right now.

Update: Around 12:15 PM ET, the stream Rumble accessed stopped working. I guess the fun is over?

Update #2: Rumble found another stream to use instead, and the site is functioning again.