The transition from traditional cable and satellite TV service to online streaming is not without its issues, as Dish’s Sling TV subscribers can attest to. The web-based streaming platform experienced a significant outage last night – its third sizable outage to date – which brought the service down for hours. The issue affected users across platforms, including web, desktop, mobile and connected devices, including game consoles and media players like Roku and Fire TV.

Users attempting to access the service were presented with error messages in some cases, while at other times, the app would just freeze instead of completing the login. 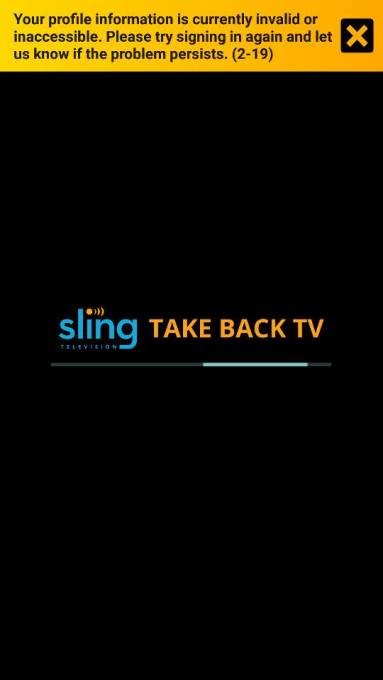 Meanwhile, those who reached out to Sling TV’s customer support lines faced lengthy hold times during the outage, which began last night and lasted for at least a couple of hours, according to reports. A number of customers on Reddit’s Sling TV forum said they were on hold for over 20 or 25 minutes, for example, some on Twitter noted hold times of 30 minutes, and on Facebook, there were reports of hold times of 45 minutes.

Sling acknowledged the outage on its official Twitter account and Facebook page yesterday evening, saying that it was aware customers were experiencing issues and its technical team was working to resolve the problem. An hour later, the company tweeted the issues were resolved, but the actual outage had last much longer – Sling’s account had been fielding complaints well ahead of its posts on the matter.

The problem with Sling TV outages, versus a streaming video competitor like Netflix or Hulu, is that Sling TV is primarily a live TV service. In addition, because of Sling’s ability to stream ESPN content, many of its subscribers are tuning in to watch games and other events in real time. That means when Sling TV crashes for hours, its customers are really missing out. Even if they were watching non-sports programming, the options for getting caught up are limited following an outage as, due to licensing agreements, not all shows are available on demand. Plus, those who are sometimes have limited back catalogs.

This is not the first time that Sling TV has crashed under the strain. The company’s first major outage occurred during the Final Four basketball tournament. Following that event, the company announced it had made improvements to the way it managed load and handled new customer sign-ups. But it then crashed again during the April 12 premiere of HBO’s “Game of Thrones” – though not quite as bad. Most issue were then limited to using Sling via its Roku app.

So far, the company has been fairly transparent when it comes to its outages. After the two prior issues, Sling TV published blog posts apologizing for the problems and explaining what’s being done to prevent future issues. Sling TV has yet to do the same for last night’s outage as of the time of writing.

The company has responded to our requests for more information about the outage, noting that its teams are still investigating the cause, but the focus is on making sure there aren’t additional interruptions. The issue was addressed, Sling says, by doing an end-to-end check and then adjusting things on the backend before restarting the systems.