Mangoplate, a service akin to Yelp in Korea, is in the money today after closing a $6.1 million Series A round to expand in its domestic market and branch out into other parts of Asia.

The round was led by Qualcomm Ventures and included participation from SoftBank Ventures Korea and YJ Capital. The latter is the venture capital firm from Yahoo Japan, which made its first investment in Korea with this deal and recently became an LP in Southeast Asia-based Monk’s Hill Venture’s fund.

Mangoplate, which emerged from Seoul-based accelerator program SparkLabs two years ago and previously scooped $600,000 in funding from SparkLabs Ventures and $800,000 from SoftBank Korea, has now raised $7.2 million from investors in total. The company counts 200,000 restaurants on its platform and is closing in on one million downloads, of which around 250,000 are monthly active users, co-founder Joon Oh told TechCrunch in an interview.

Oh estimated that Mangoplate currently has around 40 percent of Korea’s restaurants right now, and it is aiming to double that to around 80 percent with the next year. A full set of 100 percent is tricky due to restaurant in the competition Korean market, Oh said. (He estimates that around 500 restaurants close per day across the country.)

The service is available in Korean and English, but its biggest selling point is personalization. That’s to say that, rather than just serving up deals, it uses algorithms and data to curate restaurant deals based on a user’s location — and location history — and their cuisine preference.

“Lots of companies claim to use big data, but just crawl [Korea’s top internet portal] Naver and blogs. It’s not personalized in any way, so your result is the same as your friends and others,” Oh said. “Mangoplate really is a big data-driven personalization service, it’s like Yelp on steroids.” 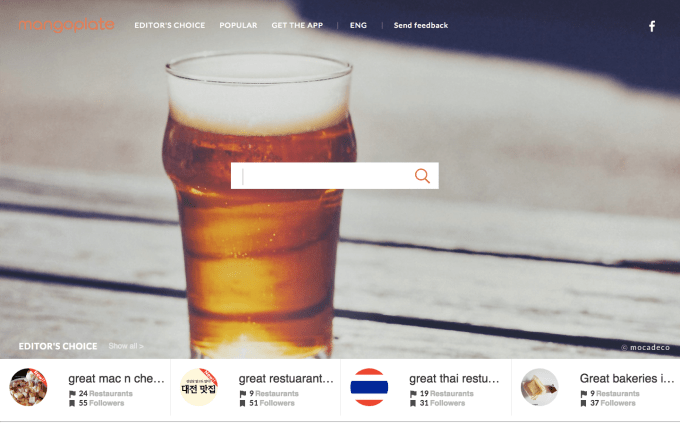 Right now, the company isn’t making money because it isn’t done scaling, but Oh said that it will roll out money-making features by the middle of next year. One major area of focus will be leaning on the app’s bucketlist-like feature — which lets users mark restaurants they are interested in — to allow restaurants owners to offer targeted offers to consumers who have shown an interest in their shop.

Mid 2016 is also the timeframe for potential expansions too, Oh revealed. Right now, Mangoplate is eying markets with similarities to Seoul — such as Singapore and Hong Kong — but Oh made it clear that building a strong position in Korea is top priority for now.

“It will take some times to become a leader in this market,” he said. “We will need to raise another round for the expansion, but we can start testing [overseas cities] with this funding round.”

Mangoplate’s opportunity in Korea presented itself after the government ordered domestic internet giant Naver to shutter Wingspoon, the country’s dominant food discovery service that it acquired, back in 2013. Wingspoon had been plagued by fake reviews and restaurants gaming its system. Oh said Mangoplate has a number of systems in place to detect suspect behavior, but he declined to provide specifics in order to avoid giving the game away. (One method is sign-in via Facebook or Kakao, although that doesn’t remove the issue entirely.)

Oh had praise for Mangoplate’s investors, explaining that their mix of international know-how and mentorship will be vital for the service’s future.

“Having these mentors has been really really helpful. A-calibre investors are critical especially when we want to raise a bigger round from investors outside of Korea — having those names is very important,” he said.