Livecoding.tv, a startup in Y Combinator’s current class, is launching today to help coders learn from their peers in real time.

The way Livecoding works is pretty simple. Developers stream live video of themselves coding, and users watching can ask questions or give feedback.

Anyone who wants to stream about coding can do so, from expert coders to 11-year-old kids building their first Java game.

Similar to Periscope or Meerkat, you can follow individual users and receive notifications when they start a new live stream.

For professional coders, Livecoding can be a great place to source beta users or get feedback on a new app. Well-known programmer and physicist Stephen Wolfram, for instance, promoted his new programming language on Livecoding last week with a demonstration that drew more than 4,000 viewers. 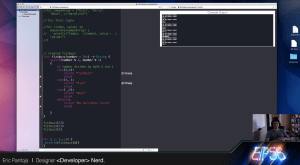 For less experienced coders, there are plenty of coding tutorials available online, but engaging with expert coders and watching their progress in real time could be much more educational.

“That interaction is one key thing that differentiates us from a regular online tutorial you can watch on YouTube,” says Livecoding co-founder Jamie Green.

“Those tutorials tend to be very edited, and they take the most direct route to the problem they’re trying to solve, but in real life that’s not the way that engineers solve problems,” he says.

Beginners can also post their own streams to ask for tips and comments about what they’re building.

“Some people say that it helps them to concentrate and to think better, if they know that they have an audience they’re not going to be switching to Facebook every five minutes and getting distracted,” Green says.

And Livecoding isn’t limited to building an app or a game. The platform has been used by one programmer to set up a 3D printer, Green tells me, and another who wrote code to play live music. Eventually, Green says Livecoding may expand into new areas beyond coding.

“Live education is the key to the future,” Green says. “Verticals like design could be very interesting to engage with this model.”

Right now, Livecoding.tv is completely free for users. Green says the site will never have advertisements, but may charge a subscription fee in the future for more structured content.