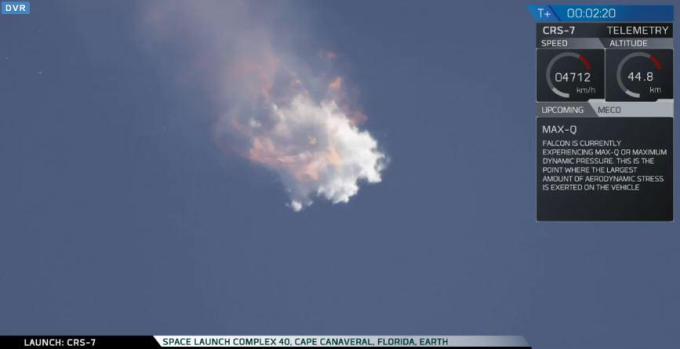 SpaceX had previously completed six successful resupply missions to the ISS, the latest one in April. While there were no humans on board and no accidents on the ground, the lost cargo contained over 4,000 pounds of food, water, and science experiments for the crew on station. William Gerstenmaier, NASA associate administrator for human exploration and operations, stated that the ISS crew will be fine and has sufficient supplies for the next four months. The next ISS resupply mission is scheduled to launch on July 3rd with the Russian Progress 60P vehicle. The exact cause of the Falcon 9 failure is unknown at this time, but Elon Musk, CEO of SpaceX tweeted:

There was an overpressure event in the upper stage liquid oxygen tank. Data suggests counterintuitive cause.

In the NASA press briefing following the accident, SpaceX was asked if there was anything that was done differently for this launch than in the previous six launches. SpaceX’s president, Gwynne Shotwell, responded, “There’s nothing that stands out as being different for this particular flight.”

SpaceX will now lead an accident investigation, making use of telemetry from 3,000 different channels that were transmitting information during the launch. “If there’s something there, we’re going to find it,” Shotwell said.

An unlucky series of events makes this the third failed resupply mission to the ISS in the past eight months. An Orbital Sciences resupply mission failed in October, the exact cause of which continues to be disputed. And in May, a Russian resupply mission was placed in the wrong orbit, forcing its cargo to burn up in the Earth’s atmosphere.

In addition to providing supplies to the ISS, this launch was going to be SpaceX’s third attempt to softly land the first stage of their two-stage Falcon 9 on a platform in the sea. If they succeeded, it would have been the first time a rocket has ever been fully recovered for reuse.

About ten minutes after launch, SpaceX intended to detach the first stage of the Falcon 9 from the upper stage and cargo, flip the first stage 180 degrees, have it reenter into the Earth’s atmosphere faster than the speed of sound, and steer it to a floating barge in the sea.

If that sounds difficult, it’s because it is. SpaceX’s first two attempts at this complex strategy impressively ended up on target. However, they both resulted in violent explosions.

The first attempt occurred in January and failed because the rocket prematurely ran out of the hydraulic fluid used to steer the small fins that help control the rocket’s descent. Because of this, it landed with too much lateral force and exploded on impact.

The second attempt, packed with more hydraulic fluid, occurred in April and was much closer to sticking the landing. The hydraulic fluid and controlled descent weren’t an issue, however the rocket engine fired a few seconds longer than it should have. These critical seconds caused the rocket to temporarily lose control in the last few moments before landing, ultimately tipping over and exploding.

SpaceX posted that they understood the cause of this failed landing well, and have made “changes to help prevent, and be able to rapidly recover from, similar issues for the next attempt.”

As this Sunday’s launch has shown, a standard rocket launch is difficult enough without adding in the complexity of reusability. So why has SpaceX dedicated more time, effort, and money to this strategy? The goal is to revolutionize the business of rocket launches.

All rockets launched today are mostly expendable after just one flight. It’s like an airline throwing a jumbo jet away after a one-way trip across the country. If that were the norm, all airlines would jack up ticket prices so that only the elite few could afford to fly.

SpaceX aims to change that strategy, and they’re not the only companies working to do so. Blue Origin is testing a reusable suborbital rocket called New Shepard which will be used for space tourism.

SpaceX and Blue Origin have been the only companies to actually test a reusable rocket so far. However, back in April, one of SpaceX’s biggest competitors announced plans to join the rocket reusability club. United Launch Alliance (ULA), which competes with SpaceX for large government contracts, released plans for their new rocket, the Vulcan. This is undoubtedly an attempt to find a better way to match SpaceX unprecedented low launch prices. 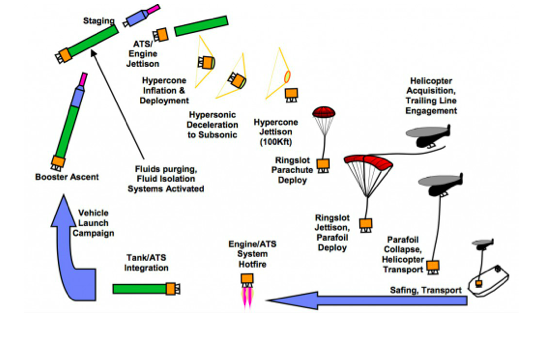 The Vulcan is early in the concept design phase, but will eventually be reused in a completely different manner than the Falcon 9. Rather than recovering the first stage from a vertical landing, it will attempt to capture the most expensive parts of the rocket in mid-air using a helicopter. This may sound crazy, but it is actually a technique the US Air Force used back in the 1960’s to recover film canisters from orbiting satellites.

While ULA is further behind in their development of a reusable rocket, the company has launched 96 missions with only two partial failures since 2006. SpaceX’s Falcon 9 has launched 19 times with one partial, and as of Sunday, one full failure since 2010. In an industry where reliability trumps all else, ULA now has the edge.

The race for reliability and innovation continues among private companies in the space industry. While this failure was certainly a setback for NASA and SpaceX, both parties have expressed determination in finding the root cause and returning back to flight as quickly as possible.