LATEST: Watch the NASA press conference above, which should begin no earlier than 12:30 PM ET, to learn more about what happened during today’s failed CRS-7 mission launch.

Here’s a video of the explosion of the unmanned Falcon 9 rocket and Dragon capsule:

UPDATE: The SpaceX rocket seems to have broken apart entirely in what looks like a major mission failure. During the feed, the rocket start smoking and then appeared to come apart altogether about a minute or more into launch. The resupply mission was thankfully unmanned. 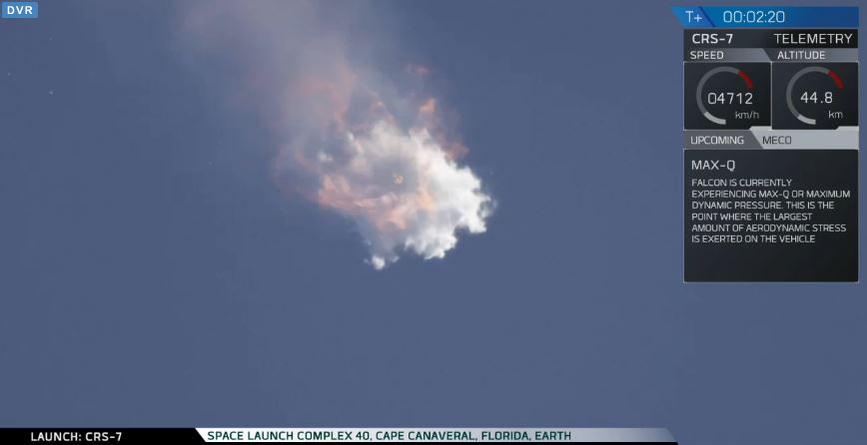 UPDATE 2: SpaceX just tweeted to announce that the craft did indeed “experience an anomaly on ascent.”

The vehicle experienced an anomaly on ascent. Team is investigating. Updates to come.

Falcon 9 experienced a problem shortly before first stage shutdown. Will provide more info as soon as we review the data.

This is the first major failure for a Falcon 9 mission, which number 19 total and date back to 2010.

UPDATE 3:NASA will host a press conference on the failed launch later today, currently planned for 12:30 PM ET (9:30 AM PT).

ISS Astronaut Scott Kelly posted the following to Twitter after the failed launch:

CRS-7 was a resupply mission, but astronauts on board the International Space Station don’t appear to be in any danger of running out of essentials as a result of this failure. Microsoft was putting its HoloLens augmented reality tech in space for the first time as part of CRS-7’s cargo, however.

UPDATE 4:Elon Musk tweeted the following about the potential cause behind the catastrophic failure:

There was an overpressure event in the upper stage liquid oxygen tank. Data suggests counterintuitive cause.

Above, the feed for SpaceX’s CRS-7 resupply mission for the International Space Station is live. The streaming begins at 10 AM ET, with a liftoff targeted for 10:21 AM ET.

The mission also includes another attempt by SpaceX to recover its Falcon 9 reusable rocket stage, via an ocean-borne automated drone barge that doubles as a landing platform. SpaceX “>almost nailed the landing last time, with its CRS-6 launch on April 13.

SpaceX CEO Elon Musk has been tweeting pictures of the drone ship ‘Of Course I Still Love You’ leaving port and preparing for this test. After last time’s near miss, his team is probably extra optimistic about its chances to nail the landing today.