Early adopters who signed up for Project Fi, Google’s recently announced initiative to provide its own cellular service, can now keep better tabs on the status of their requested invite thanks to a new online tool Google rolled out this week. Potential Project Fi customers were alerted to the availability of the tool by way of an email which informed them that they could now track the status of their invite via the Project Fi sign-up page.

Unfortunately, for many customers, the new page isn’t yet showing a timeframe.

While a number of users report seeing expected timeframes of “3-4 weeks” or “4-8 weeks,” for example, many others are instead being shown a message that reads “We’re still determining your status. Check back here for updates.” (Not so useful!)

And despite repeated requests from users on Twitter, the support account for Project Fi hasn’t offered an explanation of what having no provided timeframe means, or when those users should expect to see an update. 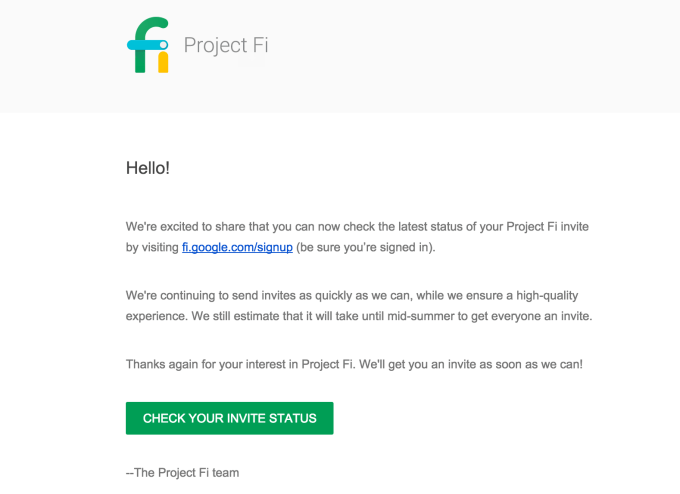 What’s interesting is that those whose invite status is still undetermined include people who signed up on day one. In other words, invites don’t appear to be rolling out based on who asked first – Google is clearly using some other criteria to determine which invites are being processed. It’s likely that the company is making determinations based on zip code and mobile coverage, as the network involves using a special Project Fi SIM card that allows a Nexus 6 Android smartphone to run on top of Sprint and T-Mobile’s cellular networks.

The company said earlier this spring that Project Fi invites would roll out to everyone by mid-summer, noting then that an online tool to check invite status would soon become available.

Users’ interest in the new network has a lot to do with its affordability. Project Fi is a contract-free MVNO with plans that start at $20 per month for unlimited talk and text, plus Wi-Fi tethering support. You then pay for data as you go at $10 per GB. In addition, users will receive credit for unused data at the end of the month.

The service is also integrated with Google Hangouts, allowing users to place calls from their mobile number on tablets and laptops, as well as from their phone.

Though many are still waiting on their Project Fi invites, some have already received their Nexus 6 and SIM card, and are sharing their unboxing images across social media, as seen below.