After five years of research and $13 million in venture funding, Eargo has created a hearing device that people actually want to wear.

Launching out of beta today, Eargo’s invisible, rechargeable hearing aid is modeled after the fishing fly, of all things. It’s made out of flexi fibers — small pieces of soft, medical-grade silicon — which suspend a tiny speaker in your ear. 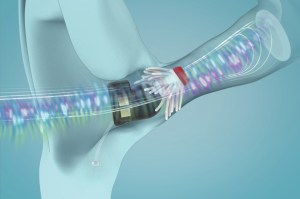 Unlike traditional hearing devices, which block the entire ear drum, these fibers allow certain sound waves to pass through, so the speaker only has to amplify the frequencies that the user has trouble hearing.

Eargo has been operating in stealth mode since 2010, when it was founded by French ENT surgeon Dr. Florent Michel and his son Raphael Michel. The startup recently closed a $13 million Series A round led by Maveron, with participation from Dolby Family Ventures, Crosslink Capital, Birchmere Ventures and others.

According to Eargo, 48 million people in the U.S. suffer from hearing loss, but 40 million of those people haven’t done anything about it. Hearing aids are expensive — the average pair goes for $4,200 in the U.S., they tell me — and the stigma attached to them makes younger people hesitant to wear them.

Eargo’s device comes in two sizes and has four settings, which you adjust by tapping the side of your ear two times. One side can be set louder than the other, which is especially useful for the army veterans using Eargo after blowing out their ear drums firing weapons. 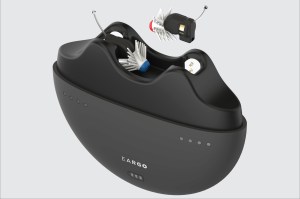 The device, along with a portable charger and inductive home charger, can be purchased on the Eargo site for $1,980 up front, or $96 per month with a financing plan. For an additional charge, people with specific hearing problems can work with Eargo’s team of audiologists to customize the settings on their hearing aid.

“If you think about the future of hearing devices, and this new subset of wearables called ‘hearables,’ you really need something that can sit comfortably in the ear all day long, and something that’s invisible,” says Matt Welch of Eargo.

Welch hints at bluetooth capability, along the lines of the movie “Her,” as a future Eargo product feature.

“You can use your imagination to think about the other places this could go,” says Welch. “Once you can make something that is comfortable and invisible and rechargeable, you can do a number of different things with it.”