On-demand service Postmates just closed an $80 million Series D round. The company told TechCrunch that the new funding values them at close to $500 million. The round was led by Tiger Global Management, and follows a $35 million round closed in February.

Bastian Lehmann, co-founder and CEO of Postmates, announced that the company has surpassed 2.5 million deliveries across 28 different markets. Lehmann also wrote that gross profit is on track to grow more than 10x in 2015 compared to the previous year. 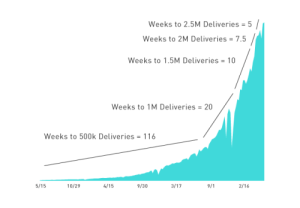 Originally started as a courier service for “delivery from anywhere,” the company has recently formed partnerships with popular companies, such as Apple, Starbucks and Chipotle.

One of the biggest downfalls with using Postmates is the hefty delivery fee, which can range anywhere from $5 to almost $20, depending on a user’s distance from the pick-up site.

However, Postmates recently launched the Postmates Merchant Program, which offers a $4.99 delivery fee for more than a thousand restaurants. In return for being prominently featured in the app, preferred restaurants pay Postmates about 15 percent of the order total. This new revenue source has allowed the company to reduce delivery costs for the user.

While this preferred merchant program only started 10 weeks ago, Lehmann told me that 20 percent of all Postmates orders are now from a preferred merchant. He also said that these reduced fees have caused order frequency to almost double.

Lehmann also hinted at a future product that will even further reduce delivery fees. While he wouldn’t give specifics, it seems the company is working on software that allows couriers to deliver multiple orders in one trip, presumably like an UberPOOL for deliveries.

Notably, the company said that none of this new funding will subsidize delivery costs. When asked to comment, Lehmann said that the company is making money on every delivery, and short-term subsidization is “something he has very little interest in doing.”

WSJ originally reported the news of the new round.