Amazon announced this morning the launch of a unique – if somewhat odd – new service it’s calling “Treasure Truck,” which introduces a different way for customers to shop from Amazon.com. The company is driving around a truck filled with in-demand, limited-quantity products on sale for that day only. The service is live in Seattle for now.

Customers in the supported areas will be able to shop these deals from the Amazon mobile app on their smartphones, the company says, then choose the time slot and one of the pre-determined locations where they want to meet up with the truck to pick up their purchase.

Hey, I guess it’s more fun than tracking down the taco truck?

Though the items on the Treasure Truck are often discounted products, Amazon tells us they won’t be overstock items or other surplus goods. Instead, the items are described as “highly desirable, limited quantity products, food and more.”

The deals will include savings on a wide range of products in the weeks ahead, including new electronics, hard-to-find exclusive gourmet foods, items from local producers, and others which Amazon says it has hand-selected to be included in the service. 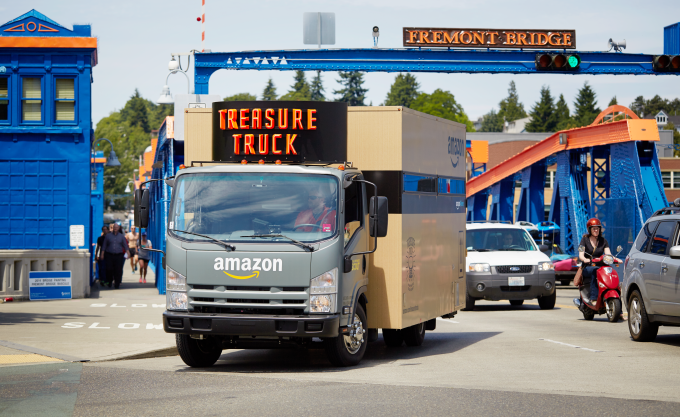 As an example, the first offer, which will go live on Saturday June 27, is a $99 Solstice Bali stand-up inflatable paddleboard which typically retails for $476.99. On the Treasure Truck, customers will be able to score this item at a 79 percent discount. Other deals coming in the next several weeks include an exclusive, limited edition Glassybaby (which is a collectible tealight glass candle holder, in case you didn’t know), a Firmstrong Beach Cruiser, and a deal on two prime, porterhouse 24-oz. steaks.

Amazon wouldn’t confirm details about how deeply discounted its future deals will be, only saying that offers will vary. In some cases, the attraction will be the savings on an otherwise expensive item, while in other cases, it may be about scoring a hard-to-find item or supporting a local business. The number of items available will also vary depending on the offer.

To use the service, which runs several days per week, customers in select areas will be able to locate the “Treasure Truck” option from the main menu on the Amazon Mobile Shopping app, then hit “Buy Now” if they want to make a purchase. They can also just show up at the truck and buy directly, Amazon says. 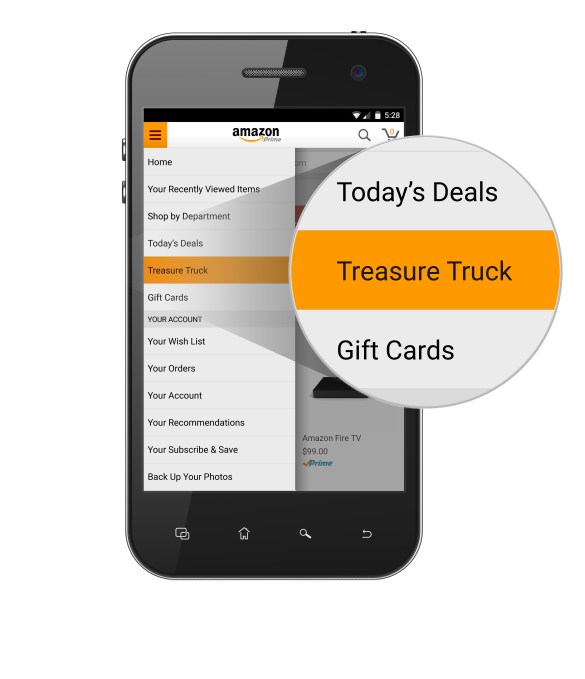 Currently, the truck will be driving around popular Seattle neighborhoods, including Queen Anne, South Lake Union, Ballard, Bellevue, SODO and more. Amazon has not announced plans at this time to bring the Treasure Truck to other markets.

The company admits that the new service is something that’s quite different from anything it’s tried in the past. Asked how it fits into the broader company strategy around e-commerce, an Amazon rep noted that Treasure Truck is simply another way for customers to shop.

“It’s a fun, interactive experience that provides access to highly desirable products, many of which they can’t find anywhere else or are only available in the limited quantity that the truck holds,” a spokesperson explained. “Selection is very important to customers and this is another way to offer them unique selection.”

That being said, the experiment comes at a time when a number of retailers are expanding their options for local pickup. For example, Walmart is trialing curbside grocery pickup in select U.S. cities, and retailers like Best Buy and Target are running tests with shopping startup Curbside in a number of Bay Area and New York locations.

This is not Amazon’s first attempt at envisioning how local pickup could work; the company previously tried a locker service, which allowed customers to pick up from designated locations around town; that experiment had some setbacks but is still online. It’s hard to say how well Treasure Truck will fare. But even if it doesn’t produce a large number of sales, the company could write it off as an advertising expense. Given the truck’s roaming presence in busy neighborhoods, it’s at least a highly visible reminder to shop from Amazon.

Though Amazon is curating the selection of Treasure Truck products, it’s also inviting merchants to contact the company to ask about inclusion, via treasuretruck-info@amazon.com. More info on the Treasure Truck service is available on Amazon.com/treasuretruck.