Ola, India’s homegrown rival to Uber, paid out $200 million to buy smaller rival TaxiForSure in March, and now it has begun to integrate the service into its own app.

The integration is rolling out city by city starting with Mumbai and New Delhi, where Ola users with the latest version of the Android app can now book TaxiForSure’s hatchback cars — its most popular vehicle option — via Ola. (An update is due to come to iOS soon.) Ola said the option will arrive for users in “other cities in a phased manner over the next few weeks.”

Booking a TaxiForSure ride is the same process as any of Ola’s other kinds of services, which include food delivery, sedans, minis, primes and auto rickshaws. Users just select the TaxiForSure option and then make their pick-up request as usual. 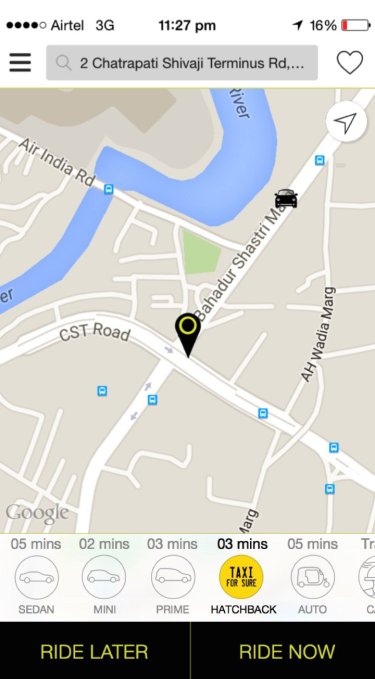 It’s still early days for the integration, however, and hatchbacks are the only type of TaxiForSure ride available via Ola at this point. Likewise, billing is still handled by TaxiForSure, which means that it doesn’t show up inside the Ola app, so cash to the driver is the only payment method for now.

This integration doesn’t spell the end for TaxiForSure’s service, that will continue to be a standalone business with its own apps too, but increasing transport options within Ola’s app makes absolute sense, for both strengthening the service and improving options for users.

The move will also help TaxiForSure drivers “get instant access to a lot more users from the Ola app,” Anand Subramanian, director of marketing and communications at Ola, told TechCrunch.

“TaxiForSure hatchbacks are another essential category,” he added. “TaxiForSure has taken a very strong position as an economic player and a category in itself.”

Despite the integration, Subramanian explained that there is no immediate plans to add other vehicle categories from TaxiForSure to the Ola app. He did, however, say that Ola is working to provide additional payment options for TaxiForSure rides that are booked via Ola.

Ola, which is backed by SoftBank and has raised more than $600 million from investors to date. Following its $400 million Series E round which closed in April, the company revealed plans to be in 200 cities across India before the end of 2015.

The acquisition of TaxiForSure was an important one that represents genuine consolidation in India and gives Ola a chance to take on Uber.

Right now, Ola currently claims to offer over 1.5 million vehicles across more than  100 cities in the country, while TaxiForSure has  24,000 vehicles across 47 cities. That’s a significant boost, but TaxiForSure wasn’t just about juicing Ola’s coverage, there are plans to develop it too. A $100 million tranche of that Series E round was set aside for TaxiForSure, and it will be used to grow into additional cities in India.

Uber itself has also been busy in India. It hired its first ‘President’ to run its business in India and took on strategic investment from India media firm Times Internet to further localize its service in India.

The U.S. company has, of course, also experienced controversy in the country. The alleged rape of a passenger in New Delhi caused its service to be suspended — now available again, Uber is currently operating a “no profit” model in the city, where it began working with a safety data service to provide more information to passengers.

Note: The original version of this article was updated with new figures from Ola and TaxiForSure.