How many meetings has Google gained with top European Commission officials since December? According to data compiled by anti-corruption advocacy organization Transparency International’s EU office, the figure is 29 — making the company second only to the pro-business BusinessEurope European lobby group, which obtained 43 meetings over this period.

It should be noted that the data is only a partial snapshot of the lobbying activity going on in Brussels, with lower level European Commission officials not required to publish meetings. However, since 1 December last year commissioners, their cabinets and director-generals are required to publish meetings and to only meet with lobbyists that are registered in the EU Transparency Register.

According to Transparency International, which is pulling data from EU websites via Parltrack, Google’s lobby budget is €3.5 million, which also puts it among the highest funded of the current crop of registered lobby organizations. And although Mountain View has a relatively small number of lobbyists in Brussels — nine vs BusinessEurope’s 29, for instance — it is one company, rather than a coalition of commerce-oriented organizations, so a smaller team of advocates makes sense.

Judging by this data Google’s lobby activities over the past six months appear similar in size and scale to General Electric’s. The next busiest tech company after these two is French telco Orange, which ranks much further down the list (with 18 meetings and a €900,000 lobby budget). Microsoft also ranks a lot further down the list than Google, with only 17 meetings — albeit it has a larger €4.5 million budget.

A Google spokeswoman declined to comment on the company’s lobbying priorities when contacted by TechCrunch for comment.

Google is certainly embroiled in several high profile skirmishes with European legislators and regulators at present. Most high profile is a long running antitrust investigation into its business practices relating to its product comparison service, Google Shopping, being conducted by the EC’s Competition Commission. That stepped up a gear in April with the Commission issuing a formal statement of objections. It is also now actively investigating antitrust complaints pertaining to Google’s mobile platform Android.

Another area where Google has clashed with Europe recently is on privacy rights — with the so-called ‘right to be forgotten’ ruling handed down by Europe’s top court last year. The judgment requires Google to process individual requests to delist outdated, erroneous or irrelevant content from search results attached to private individuals’ names. Google has made it clear it does not support the judgement, even as it is legally compelled to comply with the ECJ.

Google’s News service has also caused the company some more operational headaches in Europe as regional publishers in several countries have lobbied for changes to copyright law to charge for re-use of snippets of their content.

Zooming out, the EU is also in the midst of renegotiating and updating data protection legislation — a massively important conversation that Google must be keen to be part of. And there is the ongoing behind-closed-doors TTIP discussions, aka the Transatlantic Trade and Investment Partnership deal being lined up between the U.S. and the E.U. As the Guardian notes, the team overseeing the TTIP negotiations do not currently have to publish details of lobby meetings as they fall outside the current EC transparency requirements. 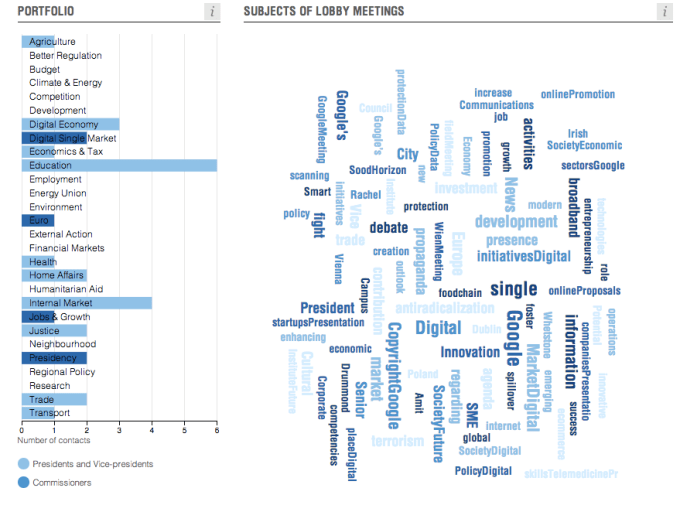 The data lists topic details for 23 meetings between Google and top EC officials over the past six months, which includes two meetings with EC Home Affairs officials on “Proposals regarding Google contribution in the anti-radicalization debate and the fight against the presence of terrorism propaganda online” (something senior Google execs have also been speaking about publicly this week at the Cannes Lions advertising festival); three meetings with officials on the topic of “Google News and copyright”; and four meetings on the “digital single market”, two of which also list “broadband investment, Google SME initiatives” among the discussion topics.

Lobbying cuts both ways of course, so while Google’s business imperatives to influence EC policymaking are clear, it’s also clear from some of these meeting topics that the EC has plenty of wants and desires from Google too — whether it’s digital job creation or discussions on developing tech areas like telemedicine.

You can view all the data via Transparency International’s EU Integrity Watch website.