Replicated, a company that wants to help SaaS vendors ship an on-premises version of their applications more easily, made a series of announcements today including a $1.5M seed round and several Beta customers.

The company is taking advantage of Docker containerization technology to build a solution that enables developers to code once and ship two identical versions of the product — one that gets installed in the cloud per usual and one for customers who prefer to maintain the application in a private cloud or their own data centers.

In addition, the company released a Beta of its product and announced several beta customers including Travis-CI, Code Climate and NPM. All in a good week for the nine-month old company.

Replicated is the second startup for founders Grant Miller and Marc Campbell, who previously launched Look.io, a mobile customer service chat app bought by LivePerson in 2012 for an undisclosed amount of cash.

After their first company was sold Miller and Campbell worked at LivePerson for a couple of years and they observed a problem. Big companies sometimes didn’t want to use a SaaS application, but they might like what the SaaS provider was offering. Most SaaS companies don’t have the resources to build a separate on-premises version and then maintain a code base for two versions, Miller explained to TechCrunch.

At the same time containerization technology from Docker and others was beginning to take off. Containers have enabled companies to create portable applications. “If applications become more portable, a company like LivePerson [or anyone else] could ship a Docker image to host behind the firewall,” Miller said.

Without containers you would be forced to create a second product for customers looking for an on-premises version — and that could prove time-consuming, costly and not always successful. The container approach solved a huge problem and Miller and Campbell took advantage.

More Than An Installer

Yet Replicated is more than just a simple installation tool. Once it’s installed, it helps integrate with company credential systems such as Active Directory or LDAP, provides information about the instance in a dashboard, informs the user when an update is available, offers auditing tools and even backup services. 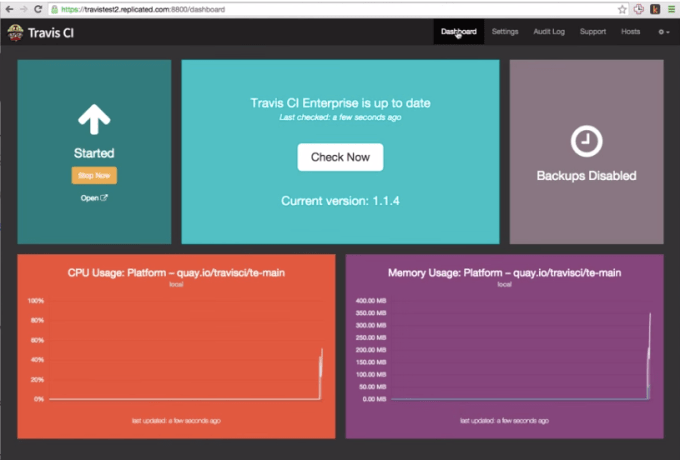 Companies have found Replicated so useful because it solved this huge problem of maintaining two code bases. As angel funder and GitHub founder Tom Preston-Warner wrote in his personal blog last week:

Replicated solves all of these issues and lets customers create an enterprise instance surprisingly fast.  A demo on the company website claims it can be done in around eight minutes. Real world installations may take longer, but the point is it’s within in reach without a huge amount of effort. (It’s worth noting that Preston-Warner is no longer with GitHub and his former company is not a Replicated customer.)

Yesterday’s announcement at DockerCon that the major container players would be creating an open container standard was music to Miller’s ears. With a standard, his company doesn’t have to create tools tuned to Docker, CoreOS and others. Replicated can create one product for the standard and it should work across all participating vendor products.

Replicated is just getting started, but if it can replicate the success of its first startup, it should work out fine.