Monument Valley remains one of the best mobile games of last year, and likely ranks among the better titles of all time, in terms of unique design and imaginative gameplay mechanics. The ustwo games debut is getting even better today, thanks to the release of a special, visually updated version of the Ida’s Dream level pack released as part of a Project (RED) charitable promotion last year.

The original Ida’s Dream expansion was made available as an in-app purchase, but the new release offers the same levels to all Monument Valley players for free, across all platforms at the same time on June 25. The original version will remain available to those who purchased it, meaning they alone get access to the special red-colored version offered in conjunction with Project (RED), but ustwo’s Director of Games Neil McFarland explained to TechCrunch that they felt everyone should be able to enjoy the full experience of Monument Valley, which includes Ida’s Dream.

“This is content that people haven’t been able to get, or just missed out on, and it’s just really good that we’re completing it now for the majority of players,” McFarland explained. “Now everyone is going to have access to the entire chapter library of the game which we’re really excited about.”

This seems likely to be the last content update for Monument Valley, with McFarland confirming that as the studio discussed around the time of the original Ida’s Dream release, they’re focusing on future games and upcoming experiences like the virtual reality story adventure experience Land’s End, which is due out later this year. Land’s End will make its debut on Gear VR, and McFarland says that ustwo games has been working closely with Oculus VR to make sure it provides a great movie VR experience.

Another game destined for mobile devices, with a more traditional 2D touchscreen-based design, is also already in the works and is due out sometime next year, McFarland told TechCrunch. The company isn’t revealing much about the follow-up yet, but given the success and reception of Monument Valley, it’ll have high expectations to live up to when it does arrive next year.

Overall, Monument Valley has already accumulated a total of nearly 4 million (3,955,212 as of yesterday) downloads since its launch, across all platforms including iOS, Google, Amazon and Windows. iOS represents the vast majority of those downloads, as well as of the nearly $10 million in revenue ($9,481,263) it has earned from the game to date. Here’s a detailed breakdown of Monument Valley’s performance by platform, with stats provided by the company: 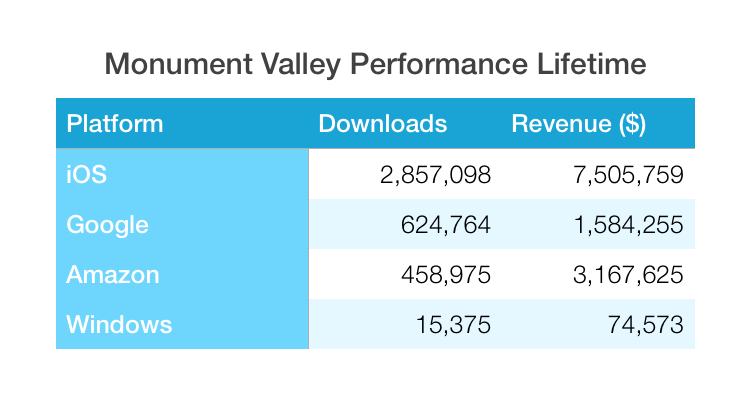 And in case you’re curious about how it’s performing worldwide, ustwo has also provided TechCrunch with regional sales breakdowns. It’s rare, granular look inside the metrics of one of the top-perfomring App Store releases of 2014.

The new, color-altered version of Ida’s Dream will be available as a free update for Monument Valley on iOS, Android, Windows and the Amazon Appstore. The original game still retails for $3.99.