Envoy, the startup behind an iPad app designed “to kill the lobby sign-in book” — as we reported last year when it landed $1.5 million — is perhaps not one that you’d associate with such fundraising. But the San Francisco-based company has indeed landed $15 million, which was provided by bit-hitting investment firm Andreessen Horowitz (A16z).

So how is it that a 15-person company that is disrupting the visitor registration system can land a seeming truckload of cash?

Well, as you’d expect when A16z is involved, there’s a lot of potential bubbling under the surface. But let’s start with where Envoy is now.

The company was close to profitable with 250 customers back in September when it raised that $1.5 million. Now, that figure has surpassed 1,000, of which — Gadea told TechCrunch — 50 percent are based outside of California and 50 percent are not in the tech space. Rakuten just moved HQ in Tokyo and it installed Envoy at its new home.

“I’ve always been nervous,” Gadea told me. “I hoped we’re not just solving a San Francisco problem… but [adoption] has been growing like crazy in all possible industries.”

Most impressive, Envoy has only ‘lost’ 10-20 customers, Gadea said, but each time that’s been down to bankruptcy or acquisition-led reasons. (So, install Envoy and your company has a chance of getting acquired… or perhaps sinking!) 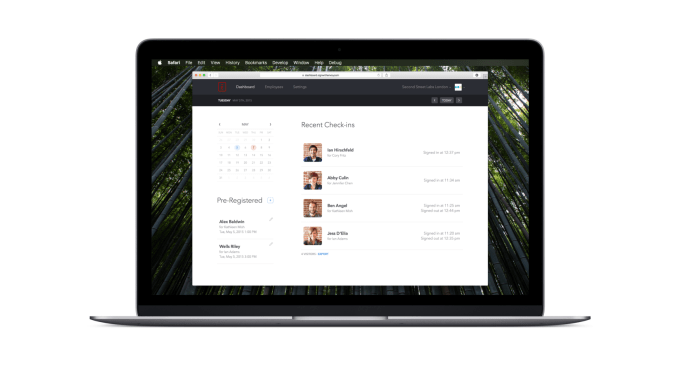 So Envoy is bouncing along well — new customer education is a key part of the challenge, Gadea said — but it’s raised $15 million because of the potential to push much further into the corporate and office world.

“It’s cool to have one product, this iPad app, but I’d like to see more than that,” Gadea said, but at this point it isn’t clear exactly what that will be.

“We have an Apple Watch app and employee app — which sends push notifications — but we want to make a more generic push,” he added.

Gadea makes the case that, with Envoy’s app used across entire companies, it is just scratching the surface and could be adapted to replace any (of the many) antiquated and non-digital process in a work place. Be that organizing conference room bookings, alerts for package arrivals, office maps that track the location of staff who travel frequently, a replacement for ID card/badges, and so on.

“We want to be the smart office central hub for all these things that used to require manual labor,” Gadea explained succinctly.

A16z, as a VC, is well known for betting on the future, so it seems like an interesting match for Envoy as it pushes its business into new segments.

On that note, Gadea said that he was particularly impressed with A16z partner Chris Dixon, who was involved in the round.

“He was the most aggressive,” Gadea. “That’s great because I want someone who’ll give me a hard time and point out the problems that we can fix.”

Dixon — who has invested in drones, soylent and virtual reality — is also well known for forward-thinking in the tech space.

Right now, Envoy is operating without any direct competitors — save hastily made $0.99 apps in the App Store — and Gadea also believes that an “ecosystem play” will help strengthen its business and plant roots into its existing customers.

Gadea said he is going to spend the money on hiring and developing its product, but it is also slowly expanding its business development team too. With the Rakuten deal, it has hired a representative in Japan and it also now has a rep in Singapore.