China’s e-commerce powerhouse Alibaba has been clear about its ambitions to grow its presence in the U.S. — in part as a facilitator between Western companies and Chinese consumers by way of services like Alipay, and in part as a way to expand its own marketplace footprint. But it is also going through some growing pains as it figures out how to carve out a place for itself in the mature U.S. market.

TechCrunch has learned, and confirmed, that Alibaba is calling it a day on operating 11 Main, its U.S.-based Amazon competitor, as a standalone operation.

Alibaba has struck a deal with New York-based OpenSky, a social shopping marketplace, in which 11 Main’s operations will be folded into OpenSky, along with Auctiva, Vendio, and SingleFeed — three other U.S. companies that Alibaba acquired between 2010 and 2011 that provide logistics and fulfilment services for 11 Main. As a result of the transaction, Alibaba will become a 37 percent owner of OpenSky.

“OpenSky and 11 Main will be joining forces, and we believe together the combined business will be a strong and healthy independent company in which Alibaba will continue to have a significant equity stake,” a spokesperson told us in a statement. The combined business, Alibaba says, will have inventory from 50,000 brands and “millions” of shoppers. “This joining of forces will help drive sales worldwide and better deliver on the mission to empower SMB brands to reach and sell to consumers.”

Alibaba isn’t currently disclosing any separate, additional investment in OpenSky — we had heard that it’s taking a wider investment in the company but have been unable to confirm this. One source characterized Alibaba’s approach as “we date before we marry” — meaning there could be separate, additional financial investment down the road if the business shows promise, like Alibaba’s investments in other U.S. properties like Snapchat and Lyft, where the company has put hundreds of millions of dollars into fast-growing companies.

On the less shiny side of the deal, a source who first tipped us off to the changes also said that a large part of the workforce at 11 Main will be given notice as a part of the transaction. There are already several people from the 11 Main management team who have left the company — including its VPs of marketing, product and merchandising and the entire merchandising team –but from what we understand the teams will merge as part of the deal.

It’s also not clear if 11 Main will continue to exist as a separate site or brand longer term.

The deal is set to be finalised at the end of July.

The changes speak to some of the challenges of trying to grow an online marketplace from scratch in the relatively mature U.S. market — despite Alibaba’s success in China, where it dominates many aspects of e-commerce, from selling goods through to logistics and payments on multiple platforms.

11 Main made its debut just over a year ago as Alibaba’s first foray into building its own consumer-facing property in the country. Part Amazon, part Etsy, 11 Main was built around a stylish, tile-based design, offering a fairly wide range of products, from fashion and funky home goods, through to books and other media and gadgets, as well as art and collectibles, from large as well as smaller producers and designers.

But in the last year, we have heard relatively little about the company and how much traction it has picked up — or not, as the case may be.

It’s not clear how or why OpenSky was singled out among other shopping sites, or whether other options were explored — Alibaba, for example, also has a stake in fashion site Zulily. If I had to make a guess, it’s that Alibaba is spreading its bets across different businesses and slightly different business models, with this one being more socially focused.

What’s more clear is that although China is huge and still growing fast, the U.S., as a large and affluent market with a proven interest in e-commerce and a doorway to doing more business in the West, nevertheless presents a major opportunity for Alibaba, so it’s not going to be giving up soon. 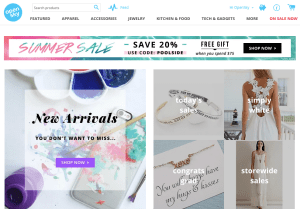 OpenSky, which was founded in 2009, is relatively incumbent compared to 11 Main. Originally it was founded as a commerce platform for influential bloggers — the idea being that online writers with followings can set up stores on their sites to sell some of the products that they mention, giving the bloggers a better cut than basic affiliate marketing deals.

When that didn’t work, the company pivoted into social shopping — basically offering one large marketplace that you can choose to navigate by way of guides who point you to interesting products in different categories, and when you don’t you can still get some idea of popular a product is based on views and “loves” (like Fancy and other socially-connected marketplaces).

Today, the conversation about social commerce is often dominated by social networks that are carving out commercial businesses — think Pinterest, Facebook, and Twitter. You don’t really hear a lot about OpenSky but it claims to have a fairly sizeable business: 50,000 stores, 2 million products, 5 million members and 100 million “connections” (a metric that it doesn’t explain but I think refers to the total web of links between users of its platform).

Up to now, OpenSky has disclosed nearly $50 million in funding with backers including Highland Capital, Providence Equity, Canaan, The Raine Group and Ron Conway. Not been too shabby with fundraising, although as companies like Fab.com have shown us, you need a lot of capital to get e-commerce businesses off the ground, and even then there’s no guarantee they may work.