Salesforce announced a new Wave analytics app today called Sales Wave Analytics, the first in a line of what the company is calling ‘role-based’ packaged apps for the Wave platform.

First, some context because all of this Wave talk can get a bit confusing. Last fall, Salesforce introduced Wave, which was a platform for the company’s analytics business moving forward. With Wave any company could build analytics apps on top of this platform. Later it introduced the mobile piece and more recently, a series of connectors to grab data from some popular big data applications and bring it into Wave.

All of these announcements were part of a broader platform play, which was being marketed to larger organizations that need to build custom applications and draw data from multiple data sources outside of the Salesforce ecosystem.

Today’s announcement is the first in a line of apps that will address specific problems and give customers a packaged app to solve a particular sales issue. This app approach lets customers take advantage of Wave technology without actually buying the whole underlying platform.

Presumably, it’s aimed at small- to medium-sized businesses or departments, which won’t necessarily want to get their hands dirty getting under the Wave hood and building their own applications. This is a way to give these customers the advantages of Wave without having to actually understand (or pay for) its underpinnings.

Salesforce Wave Analytics is the first of these apps designed to solve the pipeline prediction problem every sales executive faces. You’re near the end of your quarter. You need to know how close you are to meeting your quota and how you can make that happen.

Prior to developing this app, sales managers tended to pore over spreadsheets, says Anna Rosenman, senior director of product marketing for the Salesforce Analytics Cloud. 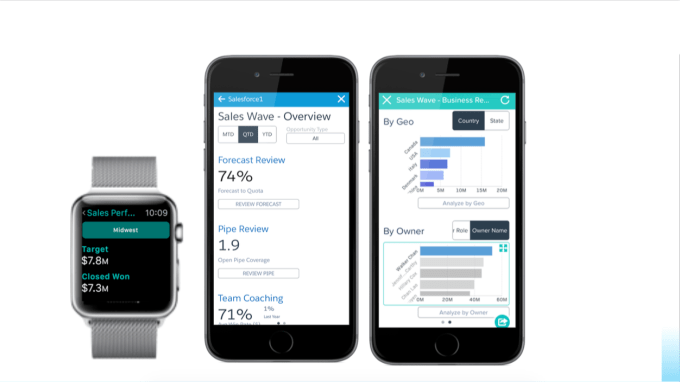 “We don’t want to replace Excel, but it doesn’t belong in the mix when a sales manager is trying to get visibility into his [or her] pipeline,” Rosenman explained.

The idea behind this app is to provide a highly visual roadmap of the pipeline, which sales managers can easily slice and dice and dive into as needed. From there, they can communicate and issue specific tasks to the sales team based on the data to drive the quota, including specific data points in the message.

It all sounds great, but is it new? Surely there are analytics and visualization packages aplenty on the market today, but the Wave Analytics app line is designed to deal with visualizing data inside the Salesforce ecosystem.

The exact nature of the competition isn’t clear though, says Denis Pombriant an analyst at Beagle Research.

“It is a big amorphous market that’s just coming into focus. It consists of analytics, business intelligence (BI), big data and things like journey mapping that we are still learning about. The various combinations of these core technologies will fuel business process advancement in a variety of industries but those advances will each be different and maybe unique to each business,” Pombriant explained.

If he’s correct, then putting together these task-specific apps may be the right way to go. Regardless, it seems that Salesforce is hedging its bets and providing these pre-packaged tools for companies who aren’t willing to go it alone, along with a platform approach for those who need to access other types of data and build their own apps.