Facebook is boring when your best friends get lost in a sea of acquaintances. To make sure that doesn’t happen, Facebook is testing a new feature called “See First”, which I spotted this morning. When turned on from a friend’s profile or Page, you’ll see their recent posts at the top of your News Feed.

See First could be the new Holy Grail for marketers that want to make sure your feed doesn’t filter out their content. And for users, it’s perhaps the most precise way to tune what you see on Facebook.

After asking about what I’d seen, Facebook responded “We are always exploring new ways to improve the Facebook experience, and are currently running a small test of a feature that lets you indicate that you’d like to see posts from a specific person or Page at the top of your News Feed.” 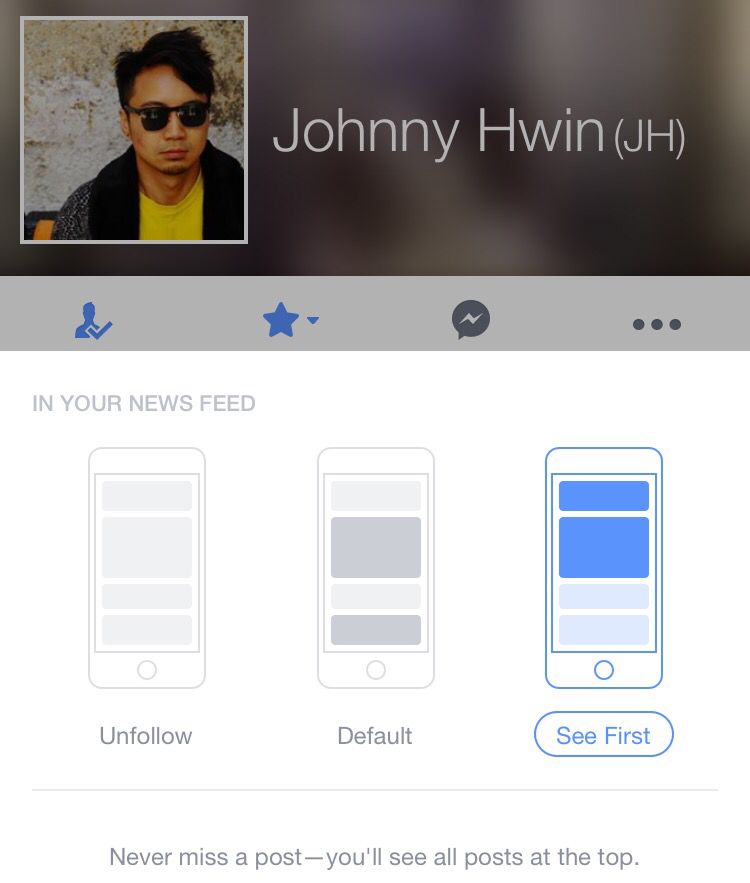 Until now, Facebook only let you Friend/Follow and unfollow people entirely on the feed, or say “I don’t want to see this” to flag what you want less of in your feed. There remains an option to set someone as a Close Friend and get Facebook notifications when they post. But See First lets you pick people or Pages you care about and see them in the most prominent spot on Facebook, the top of the News Feed.

Many years ago Facebook offered granular sliders for choosing how much you wanted to see each type of content, like photos or relationship statuses. That was too complicated, though, so it moved to letting you choose to see more or less of someone, and select what content types like game posts or photos of theirs you did or didn’t want to see. This was still confusing, and took too many clicks to manage subscriptions to lots of friends.

Last year, Facebook unveiled its solution, a News Feed settings menu which lets you instantly unfollow anyone to banish them from your feed without unfriending. But it lacked a way to flag people or Pages as your favorites and see more of them.

With this test, Facebook has found a natural remedy for your closest pals and beloved Pages getting drowned out. By tapping the “Following” button on a friend or Page, you can select to unfollow or “See First”. Facebook doesn’t tell this person you’ve highlighted them in your feed, so don’t worry about seeming creepy.

The social network has been on a mission to refine its feed lately, hiding memes and hoaxes, showing people you interact with most more frequently, and taking how long you linger looking at a post into account when determining what to show you in the future. But despite the power of its omniscient algorithm, it still doesn’t always know who really makes our feeds feel essential. Nowadays, Facebook’s about news, videos, events, and more. But See First strengthens the core reason people keep coming back. It’s the friends, stupid.