Nvidia has built two Shield devices in the past, but their latest hardware to carry the brand differs a little since it’s the first non-portable in the lineup.

The new Shield (not to be confused with the old Shield, which is now the Shield portable) is an over-the-top box that uses Android TV to provide access to a range of mobile apps and games formatted for the big screen. But it does more than that, thanks to powerful gaming features that work with Nvidia services to give this small streamer powers akin to the top home gaming consoles.

Nvidia’s Shield is more like a shrunk down console than a big media streaming device, and it even offers an optional stand accessory that can let you use it like a vertical monolith atop your desk. The rectangular slab has some aggressive angles, but it’s mostly slim, and far, far smaller than any PS4 or Xbox One. But it’s also roughly double the size of, for example, an Apple TV or Roku player.

I had no trouble finding space for it in my home theater setup, however, and in fact the industrial design of the box is a cut above your average featureless streamer, with a single neon glowing accent to let you know it’s up and running.

There’s also good reason for it to take up a little more space on your home theater bench: this is no ordinary streaming media device. It can output 4K video at up to 60fps resolution, and supports Netflix’s 4K streaming content out of the box. If you’ve got a 4K TV, the difference is immediately apparent, and mobile games are getting to the point where that can make a difference with native Android apps, too.

The Shield runs Android TV, which means it is similar in many ways to other devices that do the same thing, like the Nexus Player from Google, for instance. But it’s also a very different device in many respects, thanks to Nvidia’s gaming DNA and the attention it pays to that market as a result. There’s the aforementioned 4K output support, which is more valuable to gamers than to movie and TV-watchers at this stage, but special features don’t end there. 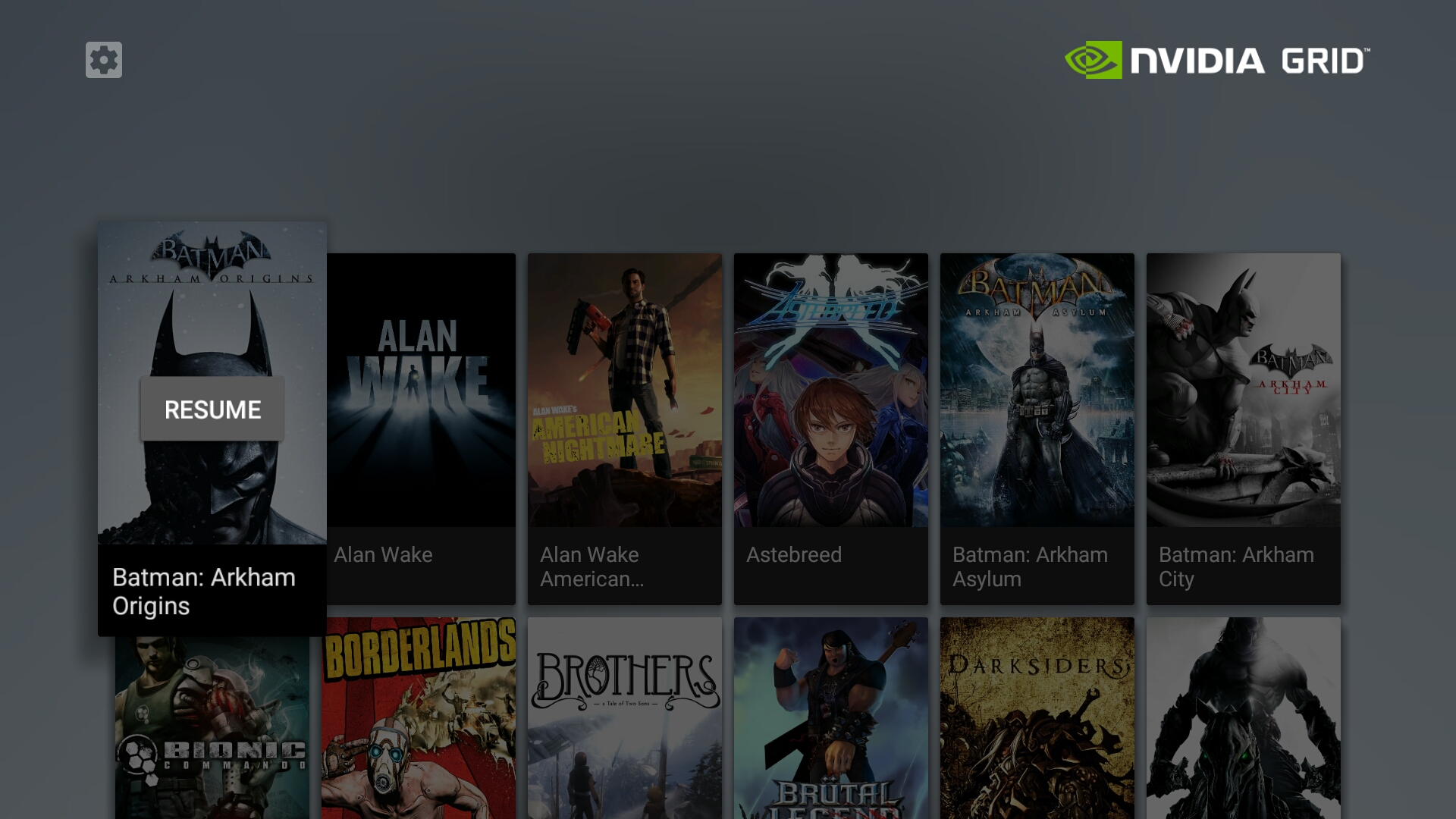 Nvidia also ships the Shield with its Shield Hub, which is a one-stop shop for both local and streamed gaming experiences. The Hub appears as a horizontal menu in the Shield’s home screen, which is unique to Nvidia’s hardware vs. other Android TV devices. From here, you can stream games (using Nvidia’s GRID Netflix-style subscription gaming service); download games from the Google Play Store, with a special selection of titles optimized for Shield and the Tegra X1; or stream games from your own Nvidia GPU-powered gaming PC.

This is the real draw of this device vs. others in the same category. Shield-optimized Android games are great diversions, and appeal to a wide range of different types of gamers, from casual players to more dedicated enthusiasts. Nvidia’s curation plays a big role here, putting only the games that work on a TV-based platform front and center. And for more serious gamers still, both the GRID offerings and the PC streaming are extremely appealing.

GRID offers AAA titles, albeit ones that are slightly older, for streamed play from Nvidia’s own powerful servers. In my experience, both on this device and previous Shield hardware, this works extremely well, with nothing noticeable in the way of lag for most solo adventure style titles. And if you’re looking for more current fare, you’re probably already a gamer, in which case you can stream titles from a high-end gaming rig located elsewhere in your house over your own network (or even outside of it, if you have things set up correctly). 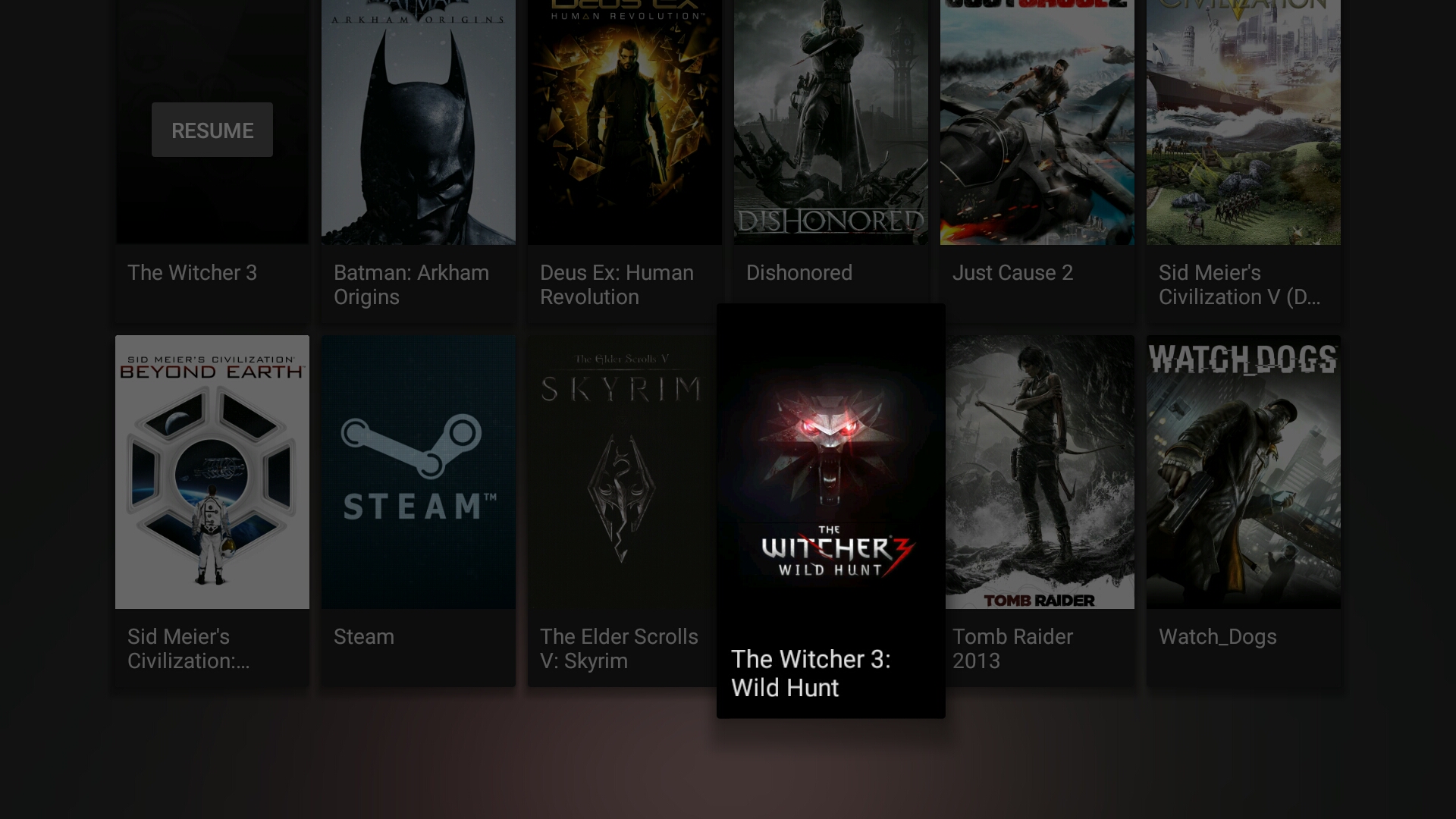 Both of these experiences feel like gaming on a full-scale, full-power rig, and that’s what matters. If you can provide that same experience in a lightweight box, on a device that also offers the full range of Android TV and Google Cast capabilities, then to my mind there’s very little reason to look anywhere else.

Nvidia also includes their Shield controller in the box with the Shield, which is a smart move. The small wand controller is an optional accessory instead, but the Shield controller offers a number of benefits, including for gaming, and for others via a headphone jack for private listening. You can also trigger a voice search on your device, which works extremely well on Android TV. 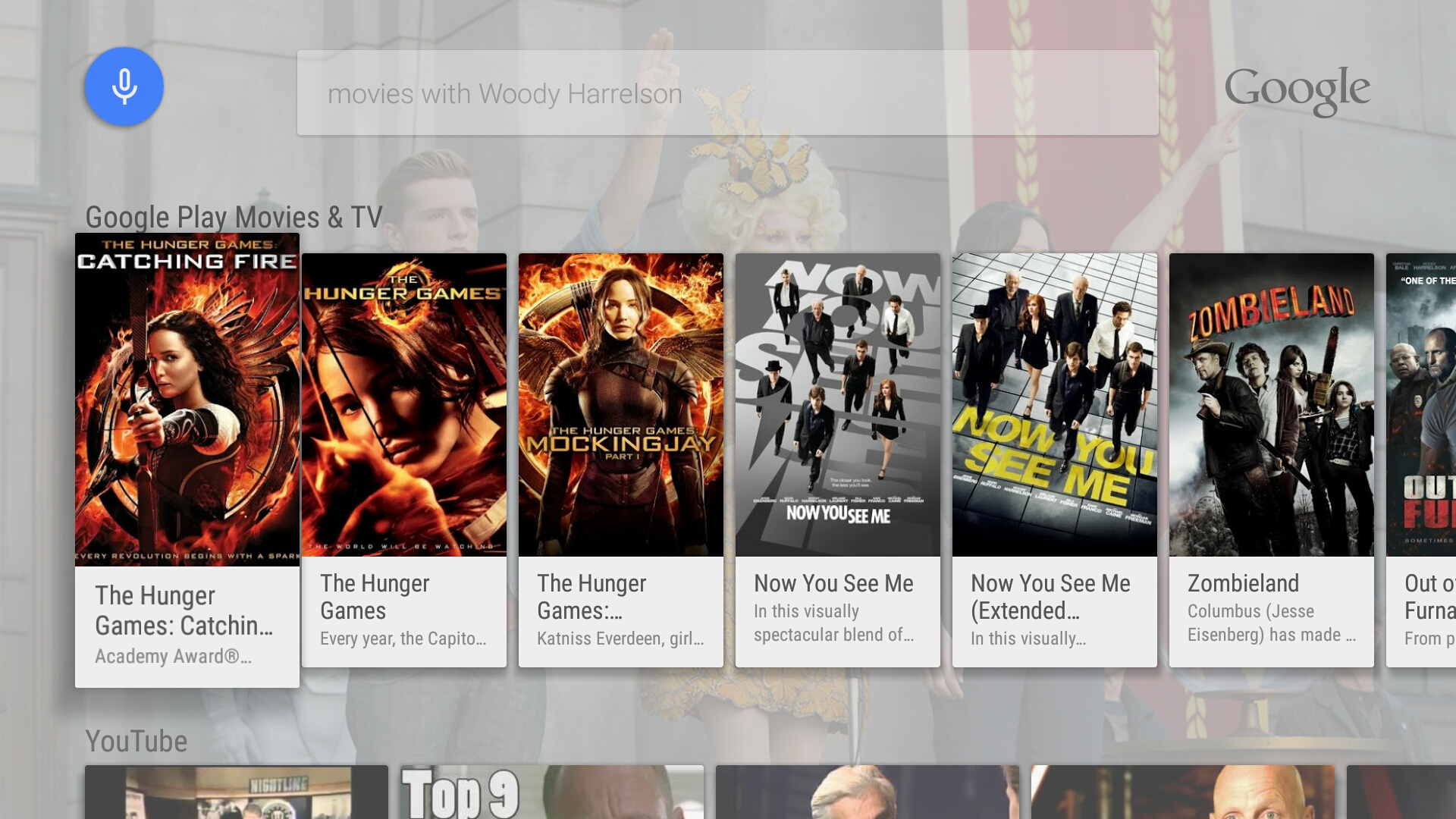 Voice commands can even bring apps front and center for launch, and surface content based on other criteria, like whether or not they were nominated for an oscar.

Android TV comes built-in with one other very important feature: Google Cast. That helps make the Shield a true Swiss Army Knife for living room entertainment. It allows you to beam content directly from your iOS or Android devices, so long as they support cast streaming (and a growing number do).

This means no messing around with finding the necessary app in the Play Store if it’s already on your device, and it also means you’ll soon be able to do things like play multiplayer games using the phones you and your friends already have in your pockets as your controllers. It has applications for music as well as games and video, and also makes it easy to share pictures from your vacation.

The Shield is a unique streaming device because of its power, too. Nvidia has put so much power behind the device that it is basically overpowered for the current needs of most users, which is in stark contrast to the rest of the field. Streaming boxes normally sport only modest internal specs, since they aren’t powering super high-resolution displays and mostly only have to deal with HD video. 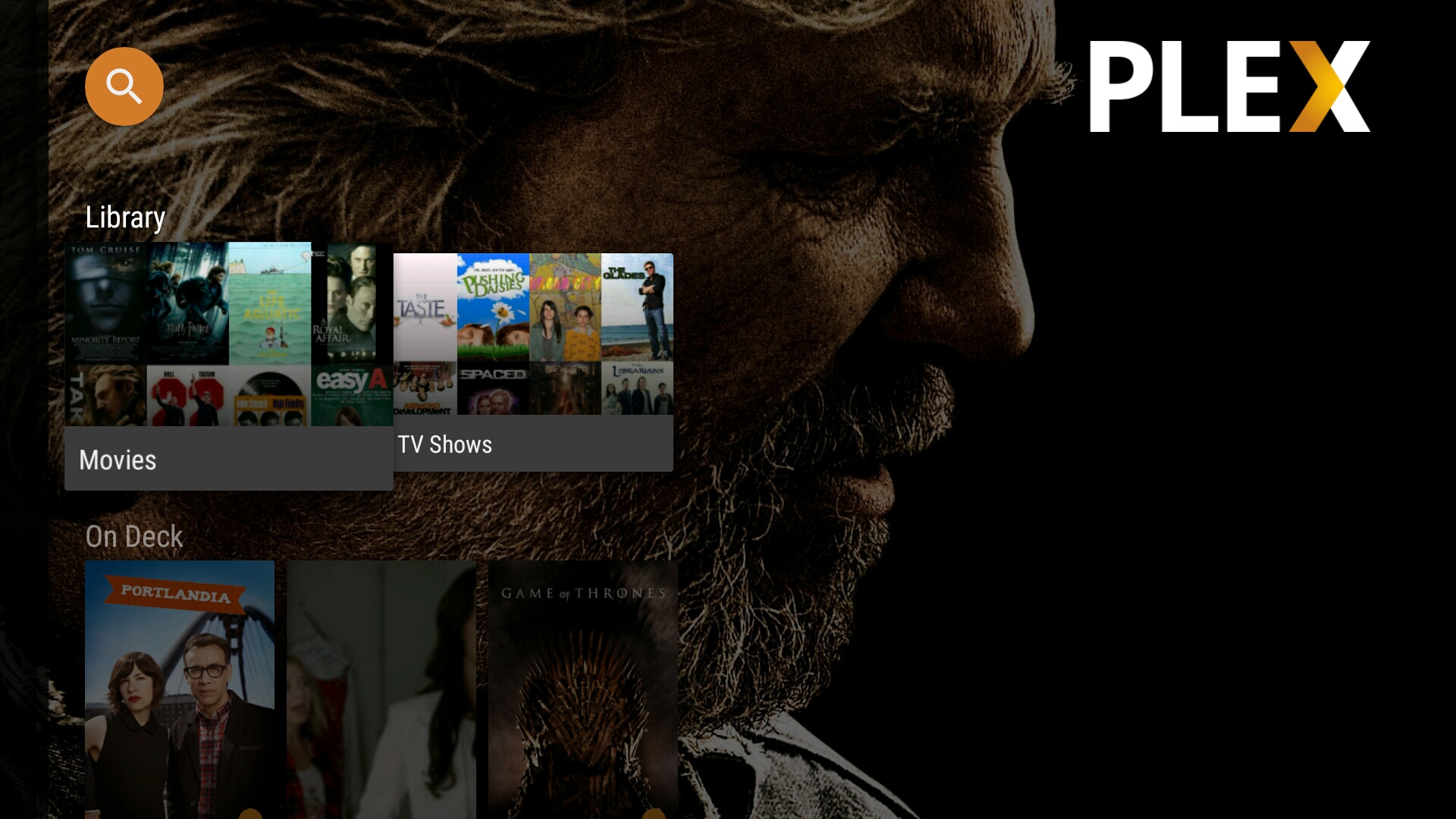 Needless to say, it handles almost anything I could throw at it with aplomb. Transitions and navigations were fast, and even over Wi-Fi most things buffered quickly. You do have to wait for games streamed either from Nvidia GRID or from your own PC to load, but load times there are pretty much on par with how long you’d be waiting if you were loading them locally, too.

Overall, I found performance to be exceptional, ranging from the lack of lag time with remotely streamed games, to performance over local Wi-Fi, to performance with even the most demanding of locally installed Android games and apps.

Nvidia’s latest Shield is also its best; the services it is offering these days are best-suited for a living room experience, and the streaming box remains portable enough that you can take it on vacation for use in your hotel room or at a friend’s place.

At $200, it’s roughly half the price of most of the competition, but that does not feel steep given the added features specific to gaming, as well as how capable it is as an Android TV machine. I already felt that Nvidia made the best Android tablet on the market with the Shield Tablet, and now it also makes the best Android TV device.

Even if you’re not necessarily a huge gamer, the Shield is a smart bet, thanks to future-proof hardware and a growing list of unique services that Nvidia is delivering to its own platforms first. Given the recent crop of Nexus devices, it’s actually Nvidia, not Google, that is doing the most to show off the hardware potential of Android, and the new Shield illustrates that perfectly.