Microsoft has launched its own branded store on Snapdeal, one of India’s top e-commerce sites, as it aims to grow its share of the country’s fast-growing mobile market.

India’s commerce is predominantly offline, particularly for gadgets — that explains why Xiaomi, the Chinese company that pioneered the online sales model, this year began selling its devices in physical retail stores — but the online commerce industry is growing at a rapid clip.

The potential of the internet has helped a number of online retail startups rake in investor money to position themselves for future opportunities. India is estimated to have 213 million internet users, up 23 percent since December 2014 and growth is set to continue.

Microsoft already sells product via Amazon India, but its store on Snapdeal will be much like a mirror of its own site, complete with “exclusive products [and] offers.”

“Besides Lumia smartphones, Indian consumers can purchase devices such as tablets and PCs as well as Microsoft software in 5,000 Indian cities and towns serviced by the Microsoft Store on Snapdeal,” Snapdeal explained in an announcement. 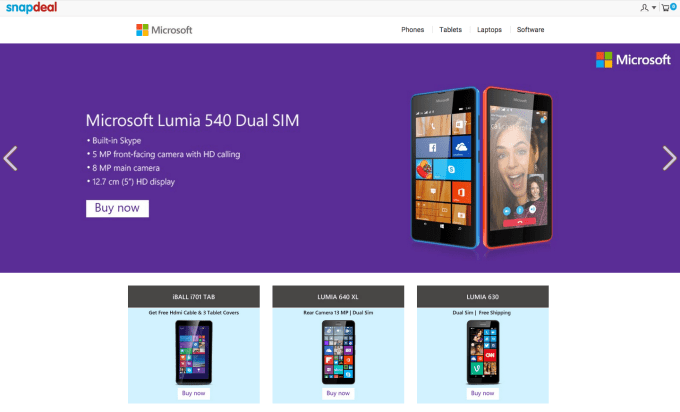 What’s interesting about this branded store, is how similar the approach is to TMall, the online ‘high street mall’ run by Alibaba. (Microsoft opened a presence on TMall in 2013.) Alibaba has been linked with an investment in Snapdeal. A prospective deal reportedly fell apart in March, only to be revived in May.

At the least, Snapdeal is paying close attention to Alibaba’s strategies. But it’s no secret that Alibaba President Jack Ma is keen on China; if you want to look deep into today’s news, it could be a sign of a closer partnership between the two, and perhaps an impending investment.

Update: Speak of the devil. The Wall Street Journal reports that Alibaba and Foxconn are keen to invest $500 million in Snapdeal. We’ve reached out to all parties for comment, and will update this post with any new information that we come across.

Snapdeal has already attracted capital from some top names in tech. Ebay was an early investor, while SoftBank — a company making big moves in Asia — led Snapdeal’s $627 million round last October. Amazon cut a $2 billion check for its India business last year, while Flipkart has raised over $2.7 billion, including its most recent $700 million round last December.