The way people watch TV in a multi-device world is changing, which has led a number of consumers – especially among the younger demographic – to cut the cord with traditional pay TV, or just never sign up in the first place. Philo is a startup that’s helping cable and satellite TV providers re-engage this audience at the university level with a live TV service offering search, sharing and a network-based DVR. The company has now raised an additional $10 million in Series B funding to continue to grow its business.

The funding was led by Philo’s Series A investor NEA and includes participation from a small broadcast affiliate CBC New Media Group of Raleigh, NC; HBO; Rho Ventures; XFUND; and Philo’s CEO Andrew McCollum. The service is one of the first startups to receive an investment from HBO, which also previously invested in an early round.

An early Facebook employee, McCollum first came across Philo as an angel investor, and later began to advise the company then joined its board following the Series A co-led by Rho and NEA. He took on the CEO role in September.

McCollum explains that he’s always been fascinated with television and was intrigued by the idea of building a version of this service for the next generation of viewers.

“TV is the most engaging consumer product ever created – the average person spends between 4 and 5 hours a day watching television,” he says. “It’s also the most lucrative advertising platform ever created.” However, he adds that the experience of watching TV today is not very well optimized for consumers or advertisers alike. “The advertising experience has none of the hallmarks of effective digital advertising which are measurement, targeting and interactivity,” the CEO notes. 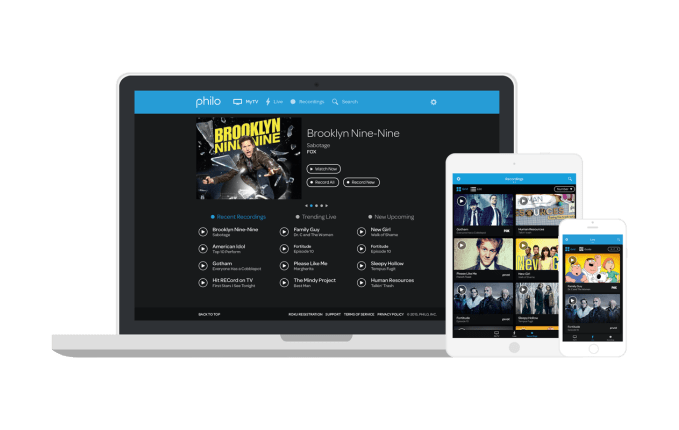 With Philo, the company has developed something of a “TV Everywhere” product that delivers live TV and a network DVR to consumers’ devices, including smartphones and tablets. It’s similar in a way to services like Sling TV – Dish’s own Internet-based TV service, as it’s also about delivering live TV as Internet-based streams. However, unlike Sling, Philo partners with a number of existing distributors that already have deals in place with the universities where Philo is now offered.

That is, the company places its own hardware on campus where it’s connected to the school’s local video ingest, which could be cable or satellite, or it’s placed at the local cable company’s head end.

Today, Philo is working with Direct TV, Dish, and Comcast in select markets, where the schools pay a “modest” (but undisclosed) fee to Philo on top of their pay TV deal in order to have the traditional TV feed converted to IP video then served out across the Philo network. The service is live now with a couple dozen universities around the U.S.

In addition to the live TV feed and network DVR, Philo is now expanding its collection of on-demand content and is working to improve its social features, which currently allow students to share links to programs they like with one another.

Philo started with students because they’re early tech and media adopters and are driving the sea change in TV. “They are becoming the ‘cord-cutters’ and ‘never-cords’ of the industry who are abandoning traditional television packages,” McCollum says. The traditional pay TV industry has been waking up to this change – offering “cord-cutter” packages or a la carte programming, for example. Philo instead offers another way to re-engage this audience.

While the top four cable providers today have their own “TV Everywhere” solutions, Philo hopes to make deals with smaller providers who don’t have resources in-house to build their own solutions, and, in time, bigger companies who see the strength of its product.

While today Philo’s business relies on its university deals, over the next 12 months, McCollum says he sees the potential for the service to expand beyond the college market.

Despite the shift to streaming services like Netflix and Amazon, McCollum believes cable programming has a future in the multi-screen, on-demand era. “There are still 100 million pay TV subscribers,” he says. “That content is still incredibly compelling and it’s certainly the bulk of what people are watching.”

With the additional funding, the company is relocating from Cambridge to San Francisco and hiring to expand its now 28-person team across the board.