The FCC has responded to concerns that PayPal’s updated user agreement, which gives the company the right to robocall and text customers, by informing PayPal that it may be in violation of federal law. One issue, according to the FCC, is that consenting to robocalls cannot be a condition of using PayPal’s service. In addition, customers must provide prior written consent before receiving robocalls, they must be able to opt out, and if they choose to consent, they must be able to specify which phone number they’re agreeing to be contacted on by PayPal.

The language in PayPal’s user agreement didn’t substantially change between the prior revision and the one that’s going live on July 1st. However, possibly because of the FCC’s plans to vote on a series of new rules designed to crack down on telemarketing and robocalls – specifically those to cell phones – the changes caught the attention of the media.

Sites including BGR and The Washington Post pointed out that PayPal’s new policy seemed to be giving the company the right to robocall and text customers for a number of reasons – ranging from being able to contact users about account activity to even sending out surveys and questionnaires or offers and promotions.

The way the user agreement reads does not make it clear that consumers have the right to refuse being contacted by PayPal through robocalls and still use its service, which would put it in violation of the Telephone Consumer Protection Act.

According to the FCC’s letter addressed to PayPal on June 11, 2015, violations such as these could subject PayPal, its affiliates, and its service providers with penalties of up to $16,000 per call or text message.

The FCC was alerted to the problem by way of media reports and other sources, including the National Consumer Law Center, a nonprofit consumer advocacy group which has been leading efforts to protect consumers from robocalls for years.

The organization presented their concerns to the FCC on June 4. One of the National Consumer Law Center’s specific issues has to do with whether PayPal can make revocation of consent a condition of its contract with users.

In the FCC’s letter, the organization reminds PayPal that autodialed, prerecorded, and artificial voice calls are subject to strict limitations, one of which is obtaining prior express written consent to of the recipients. If calls are for purposes other than telemarketing, PayPal “must also get prior express consent (either oral or written) for such calls to wireless phones,” the letter states.

For PayPal, there are a number of potential issues with simply having a clause in the user agreement that states it’s okay for the company to robocall customers.

For starters, agreeing to the clause cannot be a condition of using PayPal’s service. In other words, if a consumer clicks “no” they don’t agree to the updated User Agreement’s terms – are they still allowed to use PayPal? That’s unclear.

Secondly, PayPal customers are supposed to provide written consent to identify which phone number can be called or texted. (PayPal’s agreement instead says it can contact customers “at any telephone number that you have provided us or that we have otherwise obtained.”) The FCC reminds PayPal in its letter that “many consumers have more than one telephone line” and they “have the right to choose on which line(s) they wish to receive telemarketing or advertising calls, if they elect to receive such calls at all.”

And finally, if the nature of consent is ever contested, PayPal must be able to show that “unambiguous consent was obtained,” the FCC says.

PayPal confirms it’s in receipt of the letter and will respond. According to a PayPal spokesperson:

We have received a letter from the FCC and look forward to responding. We strive to be as clear as possible with our customers and clarified our policies and practices last week on the PayPal blog. Our customers can choose not to receive autodialed or prerecorded message calls.

The payments company seemed to have been taken by surprise by the news, given that it had, for some time, included a similar provision in its User Agreement before the one noticed by the media. Wrote the company in its blog post: “This is not a new section in the User Agreement and we want to take this opportunity to explain our position on contacting our customers.”

That could mean that PayPal had been in violation of the federal regulations even before the new user agreement emerged. As it stands today, the company says users can opt-out of this clause by contacting PayPal. That alone doesn’t appear to meet the federal guidelines. Additionally, from anecdotal reports, we understand that some customers have had trouble with PayPal’s opt-out procedures.

The company says customers can contact customer support and choose not to receive autodialed or prerecorded messages. That process has been troublesome, for some. One customer told TechCrunch they tried four times to call PayPal customer service and opt out, but were told each time that it was “not possible.” They also tried to help friends and clients, and had the same experience. Others tried contacting PayPal on Facebook, and were given a similar answer. (See image below). 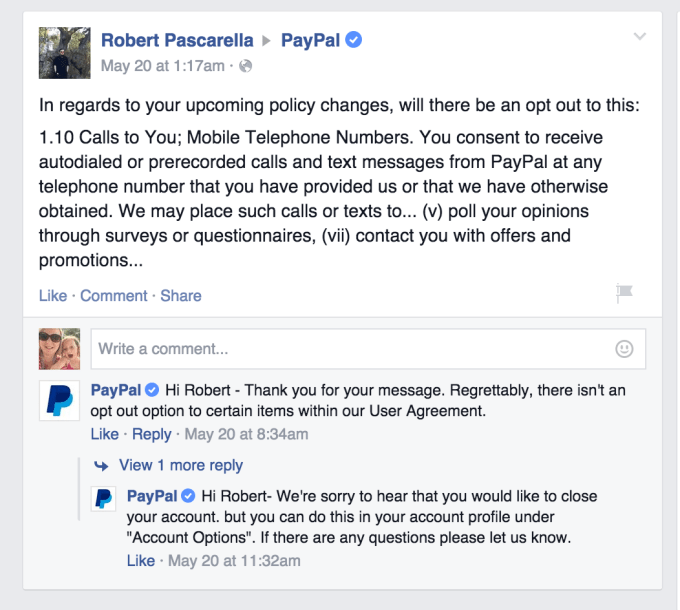 PayPal told us on June 5 it had sent out an internal communication to its customer support teams so they are all fully prepped to help customers on the matter, but we heard from customers who still couldn’t opt out after this memo was shared.

That implies the company was reacting the recent news, rather than already having established, compliant procedures in place.

Even if PayPal customers opt out (or refuse to consent to) robocalls, that doesn’t mean that PayPal would be out of options when it came to contacting customers about routine account issues, collections, or even emergencies.

There’s no limitation in the Telephone Consumer Protection Act against manual-dialed phone calls,”  explains Margot Saunders, counsel for the National Consumer Law Center. And there’s no limitation against passing contact information along to debt collectors or other third-parties when consumers agree to robocalls, she says. But the law has put limits on robocalls to cell phones.

“Those limits are there both for privacy reasons and for cost reasons,” Saunders continues. “Most people communicate with PayPal online, and there’s no limit to emails. There’s no limit to notices by snail mail, either. PayPal is not at a loss for other remedies.”

She adds that the FCC’s proposed new rules will allow companies like PayPal to contact customers without consent in emergency situations, including when there’s a data breach. The FCC is set to vote on this and a number of other changes that would crack down on telemarketing on June 18, in a vote that’s expected to pass.

Below: Letter to FCC (via Consumerist); NCLC Letter to the FCC