Shaquille O’Neal — former champion NBA center and businessman — was on a plane one day when someone was playing a slots game next to him. He liked the game so much he downloaded it, played it for four hours on a flight, and now has games made by them where he’s the star.

Those games are Shaq Jack and Caddy Shaq, two Las Vegas-themed games made by a company called MyVegas.

“I’ve seen slots before, and it was dark, but the graphics were lighting this whole plane up,” Shaq said. “Like, boom boom, I couldn’t keep my eyes off of them.” 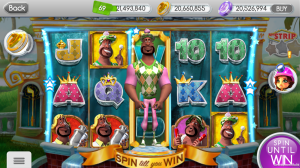 So Shaq came in and decided to build those games with MyVegas, which offers rewards to players like free hotel suites, an invite to a party later this month, and even signed basketballs by Shaq.

This isn’t Shaq’s first foray into games, nor is it his first time working with a company. In addition to being one of the most famous and successful basketball players in the world, Shaq has an MBA and has worked with a lot of startups like live-streaming app Tout — where he announced his retirement. He takes about four pitches a week from startups, he said.

“Never talk about money; that’s never been an issue,” he said. “It’s all about opportunity, about having fun and having a good time. The first things I always ask myself are, ‘Do I believe in this product? Is it fun? What’s the out?’ A lot of guys say they want to grow this flower to a big tree and sell it to Redwood City. I’m more interested in a hard-working partnership. I don’t like guys who say this is our out.”

While Silicon Valley sometimes glorifies college dropouts, Shaq said both ways — going to college and dropping out to come to the Bay Area and start a company — work.

Shaq, who spends around $1,000 a week on apps and has always liked being the first jumping onto new technology, is also a big fan of drones. “I got like 50 drones,” he said, but he pled the fifth on whether he’d talk about how many times he’d crashed them. He also has an Apple Watch.

Unfortunately we couldn’t find out what apps he has on his home screen. “That’s G14 classified,” he said.

For the basketball fans out there, we also asked Shaq at the end whether the Cleveland Cavaliers or the Golden State Warriors would win the NBA championship, with the series being tied 2-2 right now and the finals heading back to California. You can see his response in the video below.