As companies vie for top-tier talent, New York City startup Vettery is offering an alternative to the traditional recruiting process.

Although Vettery is officially launching its marketplace today, a beta version has already been up and running for a couple of months, and the company has already worked with companies that are well-known in the local scene, including Jet, Casper, Etsy, Blue Apron and Percolate.

In the launch release, ed-tech startup CourseHorse says it saw a 74 percent interview acceptance rate from the candidates it approached, and it hired its “ideal candidate” within 30 days. CourseHorse CEO Nihal Parthasarathi describes the service as “simple, straightforward and transparent.”

Vettery co-founders Brett Adcock and Adam Goldstein (pictured above) both come from the hedge fund world. Goldstein said they moved into recruiting after they saw “a lack of innovation” in the industry. Yes, there are other companies (like LinkedIn) addressing different aspects of the hiring process, but Goldstein said they haven’t really replaced paid recruiters.

“The paid services out there are broken,” he said. “Recruiting is very slow and not very transparent.” 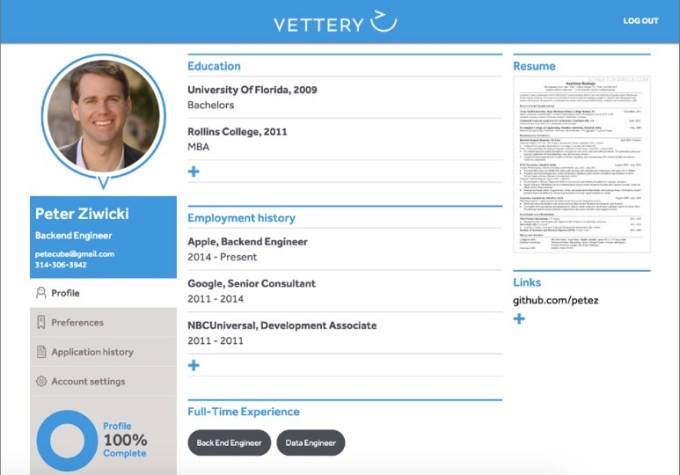 As for building a pipeline of job candidates, Vettery says more than 80,000 people have already submitted their applications. The company’s talent scouts use a “proprietary scorecard” to evaluate those applications, ultimately accepting less than 5 percent.

Goldstein said that everyone who’s accepted has a phone conversation with Vettery’s scouts, those scouts work with job candidates to create full profiles. Employers can then browse the marketplace and request interviews with the candidates who seem like the best fit. Oh, and if you accept a job, Vettery will pay you $2,000.

Goldstein emphasized the importance of the marketplace approach, which he described as a way to “give the power back to the employers.” Rather than having much of the process hidden by a recruiting firm, the marketplace allows employers to see the full pool of candidates for themselves (after the initial vetting), and they can tell pretty quickly whether their outreach methods are effective.

For a tech (or at least tech-enabled) startup, doing a live phone call seems kind of old-fashioned, but Goldstein said that at Vettery, “we really want to connect” with the candidates.

“I don’t see how you can really get to know who a candidate is and what your key differentiators are until after you’ve had that conversation,” he said.

There are fun touches, too, like a weekly countdown clock encouraging employers to approach candidates before it’s too late, and personalized perks, like Casper mattresses and Brilliant Bicycles, for users who accept offers.

The company is also announcing that it has raised $1.7 million in seed funding from undisclosed angel investors.