Microsoft will start accepting pre-orders of its Surface Hub device on July 1 in 24 markets. The devices will commence shipping in September. The larger device, weighing in at 84 inches, will cost $19,999. The smaller 55-inch option is a far-cheaper $6,999.

In case you are behind, the Surface Hub is a massive touch screen, built on the tech that Microsoft acquired by buying Perceptive Pixel (PPI). It’s a fusion of Windows 10, enough touch screen to drown a minor army, and, now, a ship date. For reference, the Hub has a computer built in, so it’s a more plug and play sort of affair. Designed for conference rooms, the Hub is a unified system for video calls, note taking, collaboration and, of course, apps. 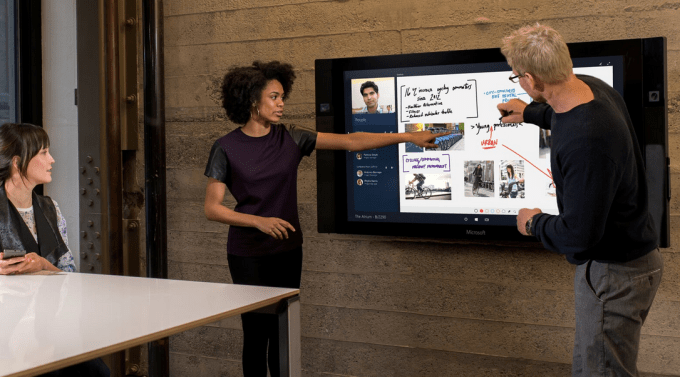 Microsoft’s image, don’t judge. This is the smaller edition.

Microsoft will wax poetic, if you let it, about how the Surface Hub employs a Windows variant that takes advantage of this and that, but what you need to know is that Windows is better on larger screens, and the Surface Hub is a fucking big screen. This was true with Windows 8 and PPI displays, but with the slicker Surface Hub hardware, and Windows 10’s strengths over Windows 8, it’s now more accurate.

To build the Surface Hub, Microsoft put together a factory in Oregon. The company had previously hinted that it intended to mass-produce its PPI displays. As it turns out, that was true, but not in the precise way that we thought.

Sadly, we can’t dub the Surface Hub a ‘big-ass touchscreen,’ as we once called its predecessors. But nicknames are good, and so I’ve decided to go with ‘wall-computer’ for the Surface Hub. I contemplated ‘massive-wall-computer,’ but that ran on a bit, so here we are.

Microsoft’s Surface Hub, at a minimum, will help establish a new pecking order inside of the company. PPI displays were once a sign that an employee was sufficiently important to get one in their office. I presume that Surface Hubs will quickly take over that role.

I’m curious at how fast Microsoft can ramp demand for the Surface Hub. Just for fun: 50,000 units of the larger edition would be a billion in revenue. At what point does a product line a KPI make?