It wasn’t long ago that most people’s understanding of genetic testing came from dystopian fiction, not real work happening in labs and clinics.

But in the last few years, companies like Counsyl and 23andme have made DNA testing a reality for thousands, pulling useful information from small samples of saliva or blood.

It’s a subject I’ve read a lot about, but I wanted to learn about the actual processes at work during the 4-6 weeks between sending in a sample and getting information derived from combing through your genes.

To get a better idea of how these companies work, I visited Counsyl’s headquarters south of San Francisco. It’s an interesting space, quickly transitioning from traditional offices to bright, open labs.

To start my visit, I met with Counsyl CEO Ramji Srinivasan to chat about the market these tests appeal to given the current state of medical technology. Today, Counsyl’s business is mostly pregnant couples or those looking to start a family.

While knowing which genetic markers (indicators for diseases or other traits derived from your genes) you have as an individual is interesting, getting that information from a couple is useful because the combination of their genes is going to determine whether those markers actually impact a potential child’s health. We’re not yet at the point where a couple could then use this information to impact the genetic code of the child they end up having (and all the issues that would stir up), but it can help a couple prepare for conditions or weigh the risks given more worrisome results. 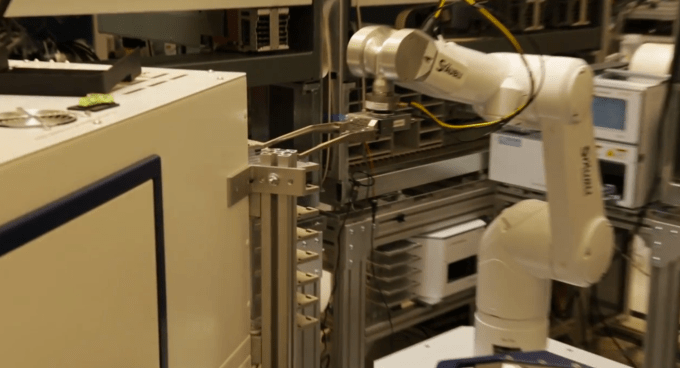 One of the robots Counsyl uses to automate its thousands of genetic tests.

Following my chat with Srinivasan, Counsyl Vice President of Automation Kyle Lapham demonstrated the processes at work in the lab. As his title implies, there’s a lot of robotics and software at work. While the company employs biologists and chemists, most of their job is verifying improved testing methods proposed in scientific journals — once that’s done, it’s up to programmers to translate those steps into actions a robot can replicate, or for the lab’s hardware team to build into a unique new rig. From there, further efficiency gains (which the startup needs to scale up with test demand) come in the form of improvements to the servers grinding through genetic data behind the labs.