Payroll giant ADP has filed suit in federal court against HR startup Zenefits and its founder Parker Conrad for defamation.

ADP and Zenefits are locked in an on-going battle over client information used to run payroll. ADP claims Zenefits was gleaning this information from the ADP system in an unauthorized manner and that this posed a security risk. ADP blocked Zenefits from accessing customer data through ADP’s RUN payroll system on June 4th.

Below is an exact statement from ADP to TechCrunch over the matter:

Zenefits unauthorized method of accessing ADP’s RUN solution pulled sensitive client and employee data, including Social Security Numbers and employee banking information, in a manner that does not comply with ADP’s high standards for data security.  In addition, Zenefits’ method of extracting data from ADP’s RUN system via “screen-scraping” put excessive demands on ADP’s servers, potentially impacting service delivery to the entire client base.  Based on the risks to the system and clients’ sensitive data, on June 4, 2015, ADP was forced to block Zenefits from accessing ADP’s RUN payroll system for small business clients.

Zenefits put up this blog post yesterday stating that it thought ADP had cut off access because ADP was developing a product to compete with the startup.

This claim is where ADP took issue with Zenefits and told TechCrunch that, “No factual basis exists for this claim.” ADP filed two lawsuits on Tuesday – one against Zenefits and a separate suit against Conrad, accusing him of defamation.

However, within the same hour, ADP sent an email offering a competing product called Opum to Zenefits customers. 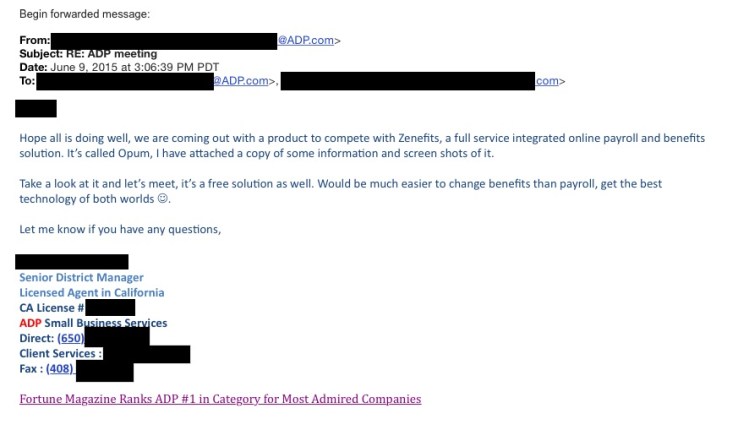 ADP is within its rights as a company to block service or not work with whoever they choose and the company has partnered with numerous other third-parties to provide access to data. However, Conrad was adamant that the evidence of a competing product shortly after shutting off access for his customers was proof that this was a deliberate attempt to thwart his fast-growing and now highly-valued startup.

“This is clearly a FUD tactic,” Conrad said. “What really upsets me is that this proves that ADP was completely misrepresenting what was going on.”

ADP has declined to comment on the details of the lawsuit at this time but told us that the action to block access is not unique to Zenefits. “ADP would block the access of any organization or individual who attempts to integrate with ADP in a manner that puts our clients at risk,” an ADP spokesperson said.

Update from ADP about the email sent to Zenefits shared customers:

With respect to “Opum,” in responding to a direct client inquiry, the sales associate confused the name with Optum Insight, which is a third party platform from United Health Group that we have integrated into our current offering and improves our ability to support benefits enrollment for our clients.  This is a core service ADP has offered clients for many years, and is a service that we charge for.