Ebay today is launching its first attempt at building a smartwatch experience for users of the Apple Watch with the debut of a new app that allows both buyers and sellers to receive updates and alerts related to items they’re tracking on eBay’s marketplace. The company has previously tested similar concepts with apps for competing smartwatch platforms, including Samsung Gear and Pebble.

The eBay Apple Watch app has been in internal testing since Apple Watch’s hardware became available, and the company says that it has been working to combat some of the “lagginess” these early Watch apps seem to encounter by optimizing its own app for better performance. (We did not have a pre-release version of eBay’s app to test these claims, however.)

The app itself features four main functions on its homescreen: Activity, Watching, Buying and Selling. The titles are fairly self-explanatory – Watching is for the items you’re keeping tabs on but haven’t yet bid on; Buying lets you see an overview of those items you’re actively bidding on; and Selling is to track the items you’ve listed on eBay. Within each of these sections are the key details you would need to know at a glance – like the time left on an auction, the current price, the number of bids, item photos, etc.

Sellers can even see a chart of their 30-day revenue in their sections. 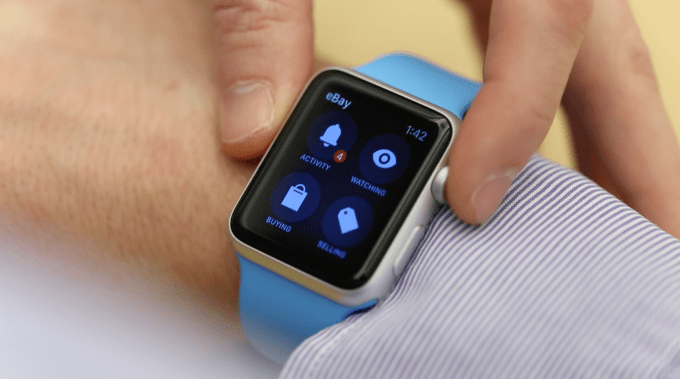 Meanwhile, the Activity area is a place for eBay customers to keep up with the most urgent communications about their auctions, including messages about being outbid, items that are ending soon, items that need to be shipped and more. In response to Seller feedback, eBay’s Watch app also allows Sellers to quickly reply to messages to provide customer service. To do so, they simply tap on the message and dictate their response to the Watch.

“Glanceable” summaries of all these areas are also provided, so you can access this information more quickly by swiping up from the main Watch face.

In total, there are 28 different types of rich notifications supported by the eBay Watch app related to bidding, watching, selling and messaging, and these can be further customized within the eBay iOS app, as needed.

While some e-commerce companies believe that smartwatch owners will actively browse and shop from the wrist, eBay’s app seems more in line with how users will actually interact with Watch apps – they want urgent information immediately, available at a glance, and the ability to quickly act on that info as need be. On eBay’s app, sellers can respond to messages and buyers can even place a quick bid – but none of these processes take more than a couple of seconds.

The Apple Watch release is being timed with mobile updates arriving now on eBay’s iPhone, iPad and android applications which also include interface and usability enhancements, as well as some regional features like support for additional payments in Germany and India, and in-store pickup options and enhanced seller features for iPad in the U.K.