As Facebook and YikYak try to grow a younger audience, a startup that taps into one of the key attribute of teen users – no money for data plans – is blowing up.

Jott, a messaging app that works without a data plan or WiFi connection, has caught on among junior high and high school students, according to co-founder Jared Allgood. He says the app more than doubled to half a million active users in March, up from 150,000 active users previous.

Allgood told TechCrunch that the app continues to gain momentum, adding 15,000 to 20,000 users a day. That’s consistent with numbers from App Annie. The app started ranking steadily in the top 75 on iOS for social networking in the U.S. in mid-April.

The reason? Teens who don’t have a data plan that will allow them to text are using their iPods and iPads to message each other on a closed network within a 100-foot area within school limits.

About 88 percent of 13-17-year-olds have a cell or smartphone, according to the latest numbers from Pew Research. However, not all of them get a data plan or a way to access the Internet during school hours, leaving many of them without a way to non-stop text each other throughout the day.

Text messages usually travel by way of your phone to the nearest cell tower. Then they get routed to other cell towers to reach the person you are texting. However, Jott can send messages from one device to another without any cell service as long as those texting are within close enough proximity to each other.

It does this by using something called a mesh network that operates on Bluetooth low energy or using a router that can reach within 100 feet of each user. It’s the same way FireChat, a group messaging app, does this, but Jott can also message individuals within your network.

And that ability to easily message peers directly within a network is the key. While apps such as Facebook, Snapchat and Instagram rank at the top for social networks among teens, texting reigns supreme. According to Niche data, about 87 percent of teens text daily, compared to 61 percent of those who say they use Facebook, the next most popular choice.

It’s tough to know why texting is the preferred method. What is out there is mostly anecdotal. Perhaps texting is simply the easiest form of direct messaging to one’s friends? Whatever the reason. They do a lot of it. More than adults. Girls send, on average, about 3,952 text messages a month, and boys send closer to 2,815 text messages a month, according to the Pew study.

This may be why Jott has caught on so fast, particularly among junior high schoolers who are less likely to have a smartphone than older teens. Jott provides a way for those without a smartphone or the data plan needed to text to still message with their friends.

“While not everyone has a data plan, most kids have an iPod,” Allgood, who has a tween daughter himself, said.

Middle schoolers really want to make new friends but need phone numbers and they often don’t have a data plan to text each other. Jared Allgood, Jott

Jott started testing the closed, or mesh network idea with a few select schools in March. That seems to have been the spark that led to a ginormous amount of growth for the startup. The effect was viral. Kids using the app in each school told their friends. 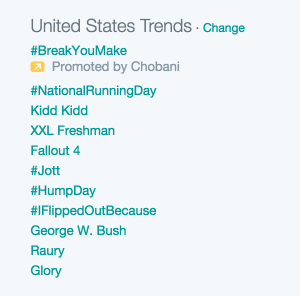 Soon those in the same school were telling friends in other schools about it, too. The app even started trending on Twitter.

Teens are a hard audience to pin down. And fickle. Giving many an anxiety-ridden ad exec a headache just trying to keep up with where to market to them on an almost monthly basis.

Andrew Watts, the teenager famous for writing a Medium post in an attempt to help us olds figure out just what the kids actually use didn’t write about Jott. But Jott blew up in March and his post was in January. We flew him out to TechCrunch HQ and interviewed him about this.

Would Watts have included Jott in that post if he were writing about it now? It seems to be growing among junior high and high school students because of the ability to message students in the same school. Watts was a college freshman so he may not have seen the value in it.

Although Jott works beyond the closed network, too. You can add those people you know on social media or those you know by name on the app. I was able to connect with Allgood and a couple of other friends already on Jott this way.

Allgood also arranged for me to test the app with an ACTUAL teen, a thirteen-year-old girl we’ll call M. However, teens being teens, she wasn’t very responsive to my questions about her Jott usage:

Me: Hi M. I’m the reporter from TechCrunch that Jared may have told you would contact you about Jott.

Me: Do you use this app every day?

Me: (an hour later with no answer) When do you use it most do you think?

M: (later that day) I do use this app every day.

Me: At school or other places?

M: (the next day) Other places and school.

Me: How many friends do you have on here? And how old are you btw?

Me: (barraging her with questions while I could) Like 100 friends? Do you know?  How did you hear about it? And what do you mostly use it for? What do you like/don’t like about Jott?

M didn’t respond back after that. Teenz. 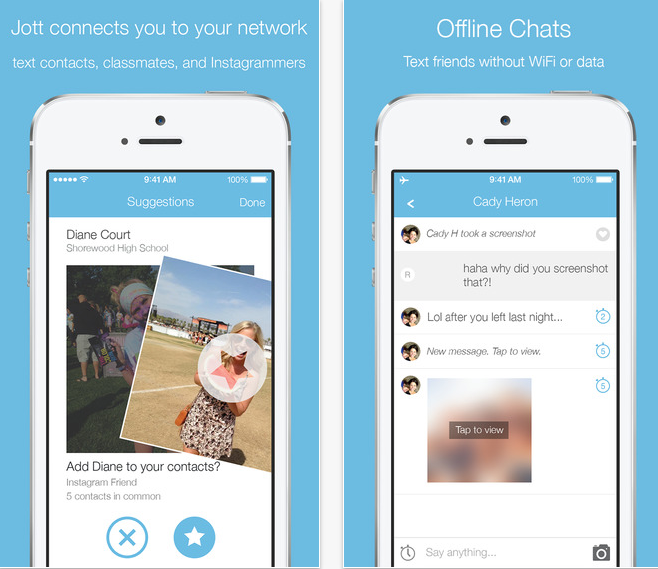 As mentioned above, I had to get Allgood to arrange for the contact with M. Not just anyone can hop on the app and start chatting with teenagers, especially not within the closed school networks. Those in the school networks must create an account with their actual name, along with their real age, and verify that they go to that particular school to participate. Other students can call out someone claiming they go to their school that does not go there or is using a fake ID.

A school principal heard about the popularity of the app among her students and tried to pose as a student, using a fake name and age, at one of the junior high schools. Other students were able to flag that the person she created on the network did not go to that school, and the principal was kicked off the network.

Privacy is also a big concern among teens so Jott features disappearing messages and screenshot detection, just like Snapchat.

The teens who are adopting the app have started to use Jott outside of school as well. Allgood believes the app is replacing iMessage at home. iMessage is currently the most popular messaging app among teens, with 60 percent of teens saying that is their preferred texting app, according to an internal Jott survey of 1300 teens.

It’s important to note that iMessage only works if you have an iPhone. Teens without one are not able to use iMessage. And they’ll need Wifi or a data plan to use other messaging apps like Kik or Whatsapp to communicate. Jott works on both iOS and Android and does not need a data plan.

Many schools often ban YikYak, another messaging app that works in the proximity of users by geofencing it, preventing students in junior high and high school from using the app at or near school. YikYak is anonymized and has been criticized for facilitating bullying. Jott might get a pass to use at school because students have to identify who they really are.

Jott also mitigates the need to know someone’s phone number. Teens in the same school can look up another classmate through the closed system and start to chat right away.

Allgood said this was probably the most important factor leading to the growth of Jott. “Middle schoolers really want to make new friends but need phone numbers and they often don’t have a data plan to text each other…Jott becomes the equivalent of passing notes in class but for the digital era,” he said.

Jott recently raised $1.7 million in seed funding to tackle teen messaging. Most of the money had come in before the growth hit in March. Lerer-Hippeau Ventures, Maveron Ventures, 500 Startups, Monashees Capital, Alta Ventures and angel investor Chris Michel all invested in the round.

Allgood plans to use the cash for some creative marketing with online celebrities that will target a mostly teen audience. Part of that plan involves a campaign rolling out this week with Vine stars Crawford and Christian Collins. I’ve never heard of them, but apparently they make teenage girls go nuts.