As the number of unicorns, those private companies valued at a billion dollars or more, has moved from a handful to a herd in Silicon Valley, many are left wondering just how arbitrary valuations have become. For founders in search of their next round of funding, trying to determine your company’s true market value in this new landscape is not only daunting, but can also be risky.

Just as the best sales people sell what their customers want to buy, the savviest entrepreneurs present their businesses with an understanding of how investors calculate value. As an entrepreneur, you need two things: revenue projection for your company and the desired return profile of the investor you’re pitching. The rest we can calculate using data from the past decade of public company valuations. These valuations are the benchmark most investors use.

While there are many approaches to valuing a SaaS business, the most common is using a revenue multiple. We calculate the revenue multiple of a public company by multiplying the most recent quarterly revenue by four and dividing that number into the enterprise value.

Using our own Scale SaaS Index, we identified the revenue multiple for all SaaS companies from 2004 to 2015, then plotted the median multiples over time. 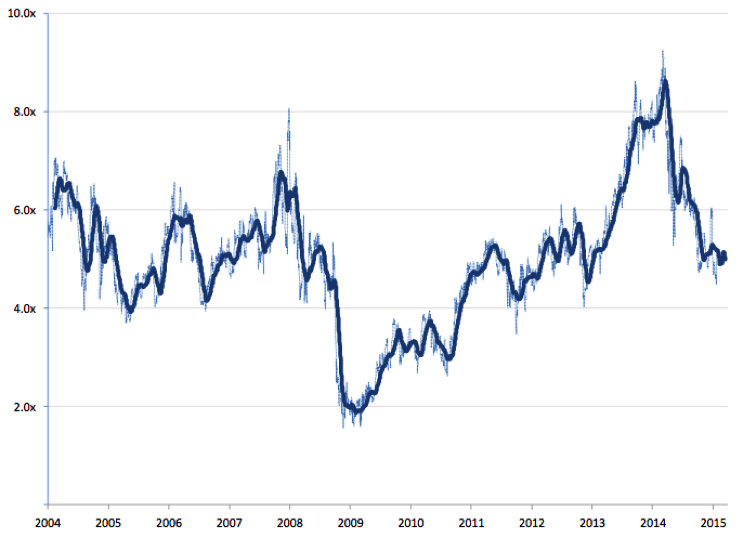 The data reveals a consistent valuation range between 4x and 6x revenue, with 5x revenue as the all-time median. Times of euphoria, such as late 2013 through early 2014, and periods of depression, such as late 2008 through late 2010, are also easy to identify.

Market cycles and company valuations will fluctuate, but we have over a decade of trading data on more than 50 companies that suggests a steady-state valuation of 4x to 6x revenue for the median public SaaS company. We believe most investors have internalized a 5x multiple as a benchmark for a steady-state SaaS company.

It is interesting to look at individual companies in the index and see if this rule of thumb applies to every company. Salesforce, the largest SaaS company in the world, trades at 7x today. It traded as low as 2x in late 2008 and up to 10x before settling where it is today, noticeably following the cycles of the index. In other words, while it may get a slight premium for its leadership position it still fits into the framework. So why do some companies trade at a premium to the index?

Companies get premium trading multiples for factors like market opportunity, competitive dynamic, management team, or a particularly unique product. Investors often quantify those factors by looking at a company’s growth rate; success in any of those areas should accelerate the addition of new revenue. 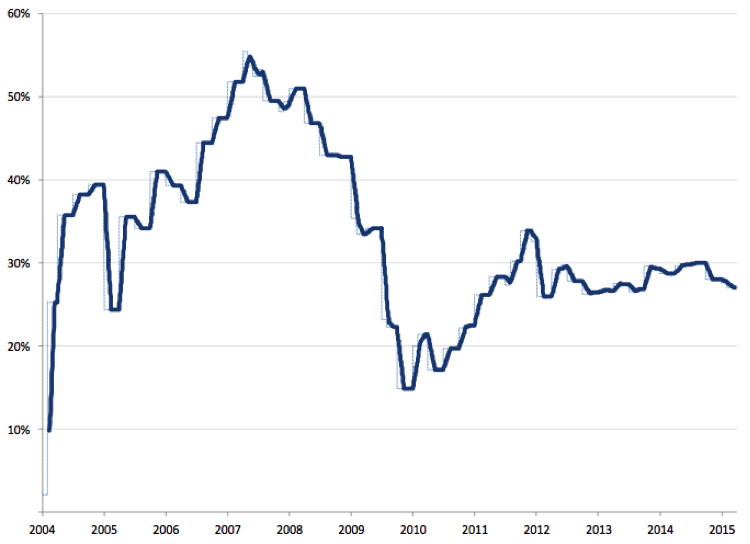 The data spikes for the first few years, then comes down, and shows a trend of just under 30 percent year-over-year growth for the next three years. Growing 30 percent year over year may sound underwhelming in an environment where we frequently read about private companies that are doubling and quadrupling revenue, but this has to do with scale. Salesforce grew 30 percent in 2014, but added roughly $1 billion in revenue.

We are seeing the maturation of SaaS as the industry leaders are approaching their steady-state growth rate. Consider Workday. Today, the company trades at a significant premium to the index: 15x revenue. At its peak, Workday traded at over 30x. We predict its multiple will continue to decrease as its growth rate slows (today, the company’s growth rate is 70 percent — high, but down from more than 90 percent when it first went public). Over time we should expect to see Workday’s growth rate decay to 30 percent, at which point it will likely trade at roughly 5x revenue.

Based on the past decade of valuations, we know public SaaS companies settle into trading at 5x revenue and grow at 30 percent. We know that investors are willing to pay higher multiples for more growth. We also know that growth will come down over time and as growth rates come down, so do multiples. We just need to apply this back to private companies, and using this knowledge, optimize how we position a company and its maximum revenue multiple.

It turns out simple napkin math can get us a good answer:

If, for example, the calculation suggests a future value of $600 million and the investor is looking for at least a 3x return, they’re thinking about a maximum price of $200 million today.

This is the three-step gut-check investors do to see if a deal fits. The entrepreneur’s opportunity is to convince the investor that the revenue growth will be greater over time than the impact of multiple compression. That is how the best companies get revenue multiples that are many times higher than the steady-state value of a SaaS company.